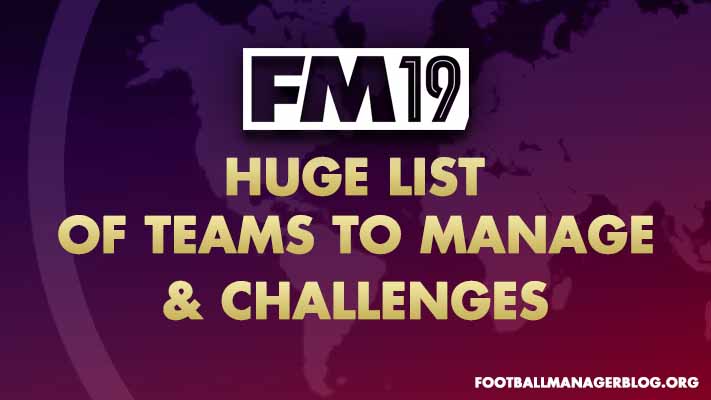 Are you looking for some great Football Manager 2019 challenges? Here's a massive list of teams to manage on FM19 which in return could make a great future save.

Here's a list of clubs to pick as your FM2019 future save from all the world continents and one ex-union.

EVERTON (England) has a solid and balanced team this year. You could develop Tom Davies into a world-class midfielder, and you have quality players like Pickford, Michael Keane, Zouma, Andre Gomes, Sigurdsson, Bernard, Richarlison, etc. With the right tactics, you can challenge for the Premier League title in the 1st season with the default squad.

St MIRREN (Scotland) recently promoted to the Scottish Premier League, and an awful summer of transfers which led to the departure of Alan Stubbs. You have a very tight budget but some very talented players.

AJAX (Holland) excellent home-grown core in De Ligt/De Jong/Eiting/van den Beek augmented by shrewd signings such as Daley Blind, Dusan Tadic, and Per Schuurs. Dolberg, Neres, and Ziyech still on the books too. Potential for an excellent save.

Four ways to pick your Football Manager future save

LAZIO (Italy) Aim would be to break Juventus dominance and win back to back league titles for first time in clubs history before chasing down AC Milan's 7 European Cups.

PUSKAS AKADEMIA (Hungary) Focus on youth to win the first-ever league title and then become first Hungarian team to qualify to KO rounds of Champions League.

GUIMARAES (Portugal) Break the big three's dominance in Portugal and win the league title for first time in the club's history before attempting to become most successful Portuguese side in Europe. Use good youth facilities to develop youngsters to sell or play a part in first-team plans.

BURNLEY (England) still looks good for a HomeGrown challenge, and now have European football to attract better players. Not much more you could ask for really.

WOLVES (England) have signed just about every FM legend from Patricio to Moutinho, can you keep them in the Premier League? Worth playing just to have Neves.

STOKE / WEST BROM (England) have both gone down so obviously make for good saves, and have managed to retain most of their good players, unlike Swansea.

REAL BETIS (Spain) are another who have built a good team, and it should be quite the challenge to grow them into a club worthy of challenging the big three.

BAYER LEVERKUSEN (Germany) is a go-to club for their talented young squad throughout, and they desperately need to get back into the Champions League!

RB LEIPZIG (Germany) have to prove they can survive without Naby Keita; can you take the job away from the clutches of Julian Nagelsmann before it's too late?

BRESCIA (Italy) for those who don't want to start in the top division but want a team with a lot of growth potential is a fantastic shout. Sandro Tonali is, of course, the pick of the bunch as the ultimate young regista, but you have a deep group of young mids beyond him to work with as well.

CARDIFF CITY (England) - Predicted to finish dead last in the EPL, a squad full of Championship standard players and a shoestring budget. Can you lead them to become the first Welsh team to ever in the EPL?

More FM19 Serie A challenges and teams to manage post

ASTON VILLA (England) as a classic fallen giant (albeit they haven't fallen that far in the grand scheme of things) save this is a self-explanatory one this year with the change of ownership. Finances will be good, solid squad! An excellent opportunity for someone who has maybe dabbled with the bigger clubs in the game and wants more of a challenge, without making it too difficult for themselves

1860 MUNICH (Germany) back in the game without adding a custom database, will probably make for a good challenge to get them back to the top league and try become better than their neighbours Bayern.

HAMBURG (Germany) would make for a good challenge, get them back to the Bundesliga and think they have some good youngsters in their team to go on and become a good European team.

ASHTON UNITED (England) - Promoted to Vanarama National North this season. A small, community club that is one of the favorites to be immediately relegated back down to the Northern Premier League. They've had a lot of players leave the club, such as captain Josh Granite (Barrow), so it will be interesting to try and survive with them.

PARMA (Italy) - They are back to Serie A, why not to the glorious days! Parma challenge is for the nostalgics of good old days of Serie A.

BORUSSIA DORTMUND ( Germany), the home of young prospects with great potential. Can you challenge the Bavarian giants to a title, and how far can you go in Europe?

BAYERN MUNICH ( Germany) - Time to replace veterans with wonderkids! Bayern has £103m in the transfer kitty and an aging Robben, Ribery, Boateng, Neuer, and Lewandowski to replace eventually. The board expects a domestic treble + CL 1/4's, so there's a bit of pressure to deliver. Could be fun, before moving on to Spain or England.

NEFTCI/SABAIL/SABAH (Azerbaijan) - long-term leader of Azeri football, which is having bad times now, or two new clubs from the capital city with exciting squads and perspectives. Interesting, for sure.

PYUNIK/LORI (Armenia) - Armenian championship has finally increased from 6 to 9 teams. Will be interesting taking a team with significant traditions (Pyunik) or a new club, which concentrates for signing young African players for re-selling.

DiNAMO MOSCOW (Russia) - One of the oldest clubs in Russia, but hasn't won a top division title since the break up of Soviet Union despite spending 26 seasons in the top division of Russia.

LOKOMOTIVI/SABURTALO (Georgia) - both teams are focused on developing their home-grown players, so they have good youth facilities.

TARAZ (Kazakhstan) - also team with a good history, had given many good players to Kazakh football, now playing in the second division and hoping to get their positions back.

FC RIGA (Latvia) - Russian owners are solving a tough task of making a big team in Latvia. And, IRL, they're close to the needed result.

FLORA (Estonia) - Estonian championship is quite exciting and unpredictable. Three Ukrainian stars on loan will help to make a good performance.

PAXTAKOR (Uzbekistan) - strong team, exciting big league and playing in Asian Champions league, be prepared for a great save.

PERSEPOLIS (Iran) - same as above, but also better finances and reputation to sign star players and updating facilities

DORDOY (Kyrgyzstan) - same as above, but harder. Also two advantages - increased league (now eight teams) and some naturalised players from Germany, who usually agree for transfer to Kyrgyzstan.

ALTYN ASYR/KOPETDAG (Turkmenistan) - both clubs from a very closed country, with full prohibition for signing foreign players. The first is young and ambitious and second shined in Soviet Union, was dissolved and renovated two years ago. The main problem is the absence of real players.

QINGDAO JUNOON (China) - famous team, which plays in Third division now. It's interesting to get them to the top, there's loads of money, but the imperfection of the reputation system makes the task very hard.

LAO TOYOTA (Laos) - same as above, but harder.

YADANARBON (Myanmar) - a team from the legendary city of Mandalay (remember Robbie Williams's song?) - one of the strongest in the country. A big challenge to push Yangon United from the podium.

PYRAMIDS/AL-AHLY/ZAMALEK (Egypt) - the first team has loads of cash and second/third are both considered as the big teams of African football. Proper research, big stadiums, and traditions - will be interesting for sure.

LAS VEGAS LIGHTS (USA) - one more entertaining club with former wonderkid and a legend of the game Freddy Adu in the attacking line.

RIVER PLATE - Argentine league structure changes the first three-four years. On the original DB, you still have Pity Martinez, on the update, Quintero joins permanently and is one of the best players on the continent.

This huge list of Football Manager 2019 challenges was made possible by the input of community over at Sports Interactive forums and the biggest Facebook Football Manager group members as well.