5 Challenges you need to consider for your next Football Manager save. It's time to setp out of your comfort zone.

I was an avid Championship Manager Player in the 90’s but as life got in the way I never really had time to play so it fell by the wayside.

Then in 2009 I read about Football Manager Live, got myself a copy and was instantly hooked again.

This resulted in buying every edition of Football Manager from FM10 to the latest incarnation.

Every year I always play a few different saves that vary in terms of different countries I’ve never managed in before to clubs at the bottom of the pyramid and I would say I find the different challenging aspects to be fun.

So this article is about 5 different ways to leave your management comfort zone and try something a bit different.

1. The Bottom of the League/Pyramid

Many players out there like to go for instant glory and will automatically find themselves going for Barcelona, Real Madrid, Man City and PSG to name a few of the large clubs with deep pockets.

The expectation of the Chairman is high with the elite clubs but most players are easy to obtain and wonderkids can be picked up relatively hassle free.

In FM11 I had a save with Inter Milan, where I was signing the best players in that edition, Hamsik, Lukaku and Dzeko ( pre-winter update ) to name a few and romping away with the League, cups, and European trophies.

However the skills that make you a great manager with these clubs are not so easily transferable to the lower end of the league or even towards the bottom of the pyramid, you will find yourself having to adapt that trusted tactic that produces 4 or 5 goals a game into something more defensive that doesn’t leak 4 or 5 goals and the pure joy and elation you get from Aston Villa to have a narrow 1-0 win at Stoke can match if not better your joy at Barcelona beating Valencia in the Spanish Super Cup.

2. The Top of the League/Pyramid

Like the players who enjoy the instant success of managing an elite club, there is a glut of players who like to play with clubs constantly embroiled in relegation battles, trying to improve them every season.

Many forums out there have plenty of small club to big club challenges also, and a large part of the FM community likes to play these games as they are trying to achieve the impossible dream.

I did it with Elgin City on FM12 and took them to Champions League glory.

Managers at the lower end of the table develop a more cautious and defensive mentality, which does not translate with a big club.

David Moyes at Man Utd being a prime example, as most opposition teams are set up to defend against the giants in the league, and if the big teams aren’t going for it most matches end with low scores or no scores.

The skills that make you a great defensive team lower down will not translate when you’re one of the big guns and that can be a challenge in itself.

Playing attractive open football to keep the chairman happy is better than a grinded out 1-0 victory.

Playing in the league of a country you have no knowledge of can be a very rewarding save.

People like to keep to the countries they know, the players that are obtainable positions that suit them etc.

Every year I always pick a country I’ve never managed in before and take over the biggest club.

In FM11 it was Sparta Prague in the Czech Republic, a very enjoyable save where I signed a young Jack Butland; he gained Czech nationality and was their Goalkeeper when they won the World Cup.

In FM13 I took the reins of FH in Iceland, it took 5 years for them to become full-time players and only then did the board allow me to sign foreign players, but once that happened I enjoyed great European adventures.

The league was a formality every season but Europe was the real challenge and a very enjoyable one.

The best I could do was quarter-finalists in the Europa League after 15 seasons but if I’d continued that save I would’ve expected to win a European trophy in the next 5 years. Untried countries have you relying more on your scouting network as the knowledge of players from countries you are used to can be outside of your budget or the club maybe is not of a higher rep to entice the more known names. 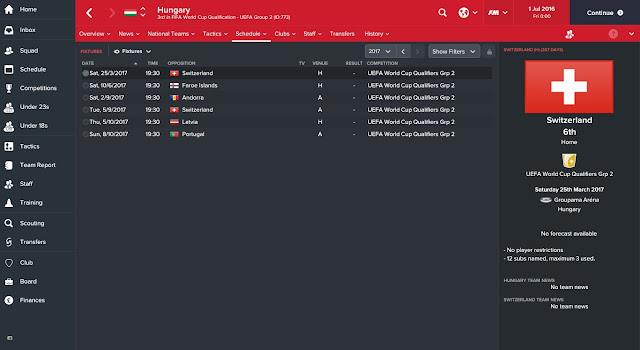 This is a contentious subject for the FM community.

Players out there are big fans of the International scene, and there are also the ones that despise it with a passion, the ones in the middle can take it or leave it depending on the country, does it have my players in the squad etc.

I find it to be quite enjoyable, being left in charge of a countries destiny.

The pressures of the FA can be just as demanding as any club chairman.

Knowing that if your Scotland side has only drawn 1-1 with Lithuania, and left you needing a miracle to qualify, you might just find yourself out of a job.

3 years in a row, FM12-FM14, I tried my hardest with Hungary trying to hark back to the good old days of Puskas’ Magyars but found it to be very challenging.

Qualification was almost always guaranteed for the Euro’s but the World Cup was a mixed bag.

Once in the tournament rarely did I make it past the 2nd Round, but that never stopped me continuing on saying to myself “You’ll do it next time”.

I would encourage you to give it a go.

I f your successful as a Country manager clubs will start knocking your door down to become their manager.

As I mentioned previously, there are a lot of good challenges on the various forums, and they offer something different.

If you have a particular way of way playing, be it a manager of Elite clubs then you have the differing Football Manager Pentagon challenges, trying to win the league in the top 5 countries of Europe as well as European success is a challenge and maybe you’ve never managed in Germany before and it’s something new for you.

Lower league challenges such as taking the newly promoted playable team in the Swedish League all the way to European glory can be rewarding and very challenging at the same time.

I created a challenge on the FM forum, Big Club Small Country, where players could pick any club to manage and also had to pick a country that had never previously qualified for the world cup.

In football manager there is a chance that your youth academy will produce players of the managers nationality, so the challenge was trying to use your clubs youth academy to produce fantastic players for your country, and then ultimately going on to win the World Cup with that country.

People are coming up with great challenges all the time, one user on the FM forum created a challenge based around The Romans invading Europe over 2000 years ago and the Vikings invasion of the British Isles a 1000 years ago.

It was creative and had you leaving your comfort zone not just in terms of management but in hiring and firing personnel too.

I hope this article inspires some of you to take up a new challenge and leave your comfort zone.

Who knows maybe you’ll find a really enjoyable save and hold a special place in your heart for a relatively unknown Bulgarian club, or even find yourself following in the footsteps of the 2 fans that traveled to Holland to watch FC Oss because they took them from small club to big club glory.

Ultimately have fun playing the game, if you find that a save you’ve started isn’t for you leave it and try another or go back to your comfort zone knowing that you tried something different but you know what you like and you’re sticking with that.