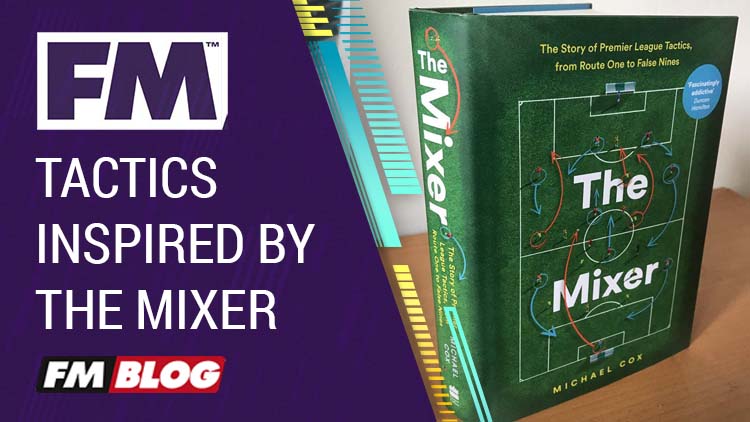 One of the greatest aspects of Football Manager is the possibility to try different tactics. If you are into the tactical side of football, the game is superb and the rabbit holes you can go down are both enjoyable and frustrating in equal measure.

Coincidentally, I downloaded FM 2020 right at the beginning of the recent lockdown to fill my spare time. This was nicely timed with the book I was reading at the time, Michael Cox’s ‘The Mixer’ – a book which guides the reader through the evolution of Premier League tactics since 1992. The book inspired me to try some of the Premier League’s most historic tactics used by some of the league’s most successful managers.

I decided to randomise my team selection at the beginning of my career. I then used three separate saves to see if I could replicate the success of the likes of Alex Ferguson, Jose Mourinho, Pep Guardiola, and even the likes of Tony Pulis and Sam Allardyce, over one season and then decide which tactics would be the most successful.
Football Manager’s selection sent me to the depths of the English pyramid and Chester, who ply their trade in the Vanarama National League North, was my destination. Here are the results of each tactic.

In the early Premier League years and throughout the mid-late 90s, direct wing play was a popular tactic. Alex Ferguson’s initial success came by using this tactic and Manchester United, utilising the technical and skilful ability from the likes of Ryan Giggs, David Beckham out wide, while two solid, structured centred midfielders, such as Roy Keane and Nicky Butt provided the structure.

Blackburn Rovers were the other main beneficiaries of this tactic in the mid-90s, regularly supplying prolific strikers Chris Sutton and Alan Shearer with a bombardment of crosses, which led them to the Premier League title in the 1994/95 season.

For my Chester team, I went with a balanced 4-2-4 wing play setting as the primary tactic, which, luckily enough, was recommended by my assistant, Anthony Johnson. 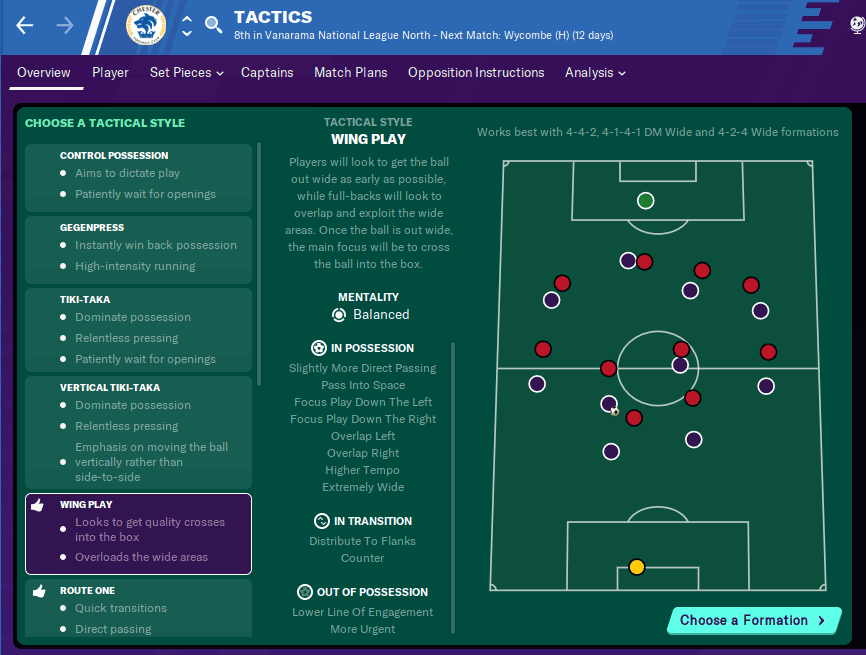 The secondary formation was the same setup, but a deeper 4-4-2 formation. The team quickly got used to their new roles and developed core partnerships across the pitch. By the mid-way point in the season, we continued to hold our own at the top of the table sitting in 5th with 22 games played. 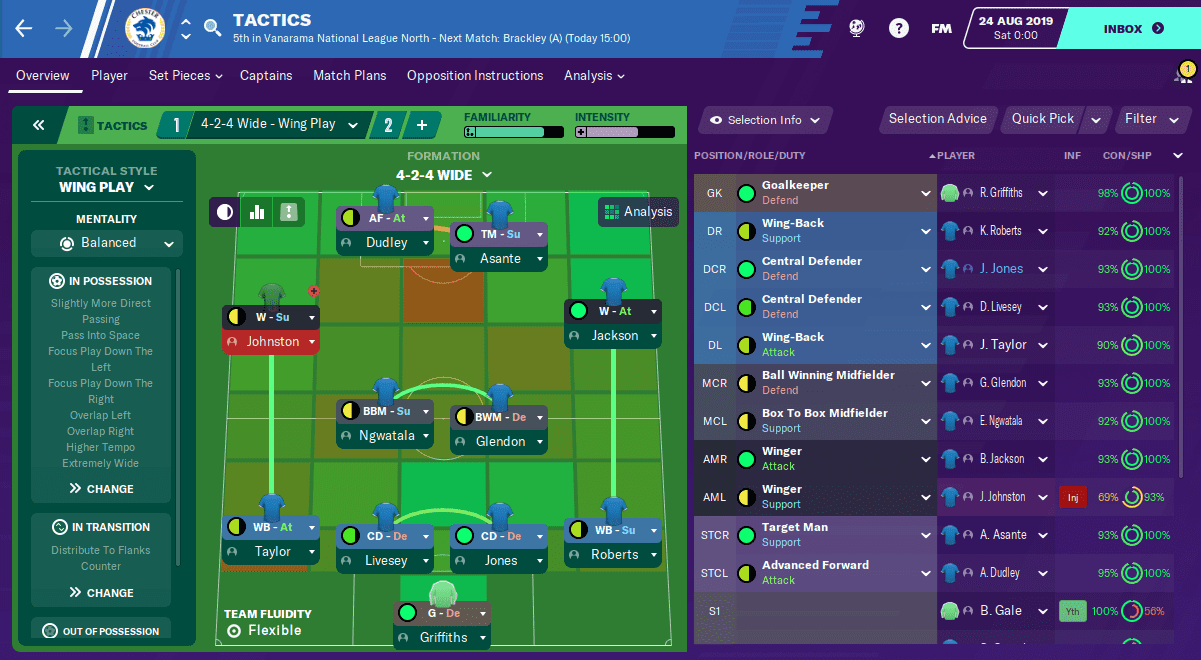 Plenty of goals came from wide areas and crosses which was particularly pleasing. Wing play clearly impacted the quality of set-pieces as well with many goals coming from corners and free-kicks too. Strikers Anthony Dudley and Akwasi Asante appeared to be enjoying themselves as the attacking focal point, scoring 14 goals a piece by the midway stage. 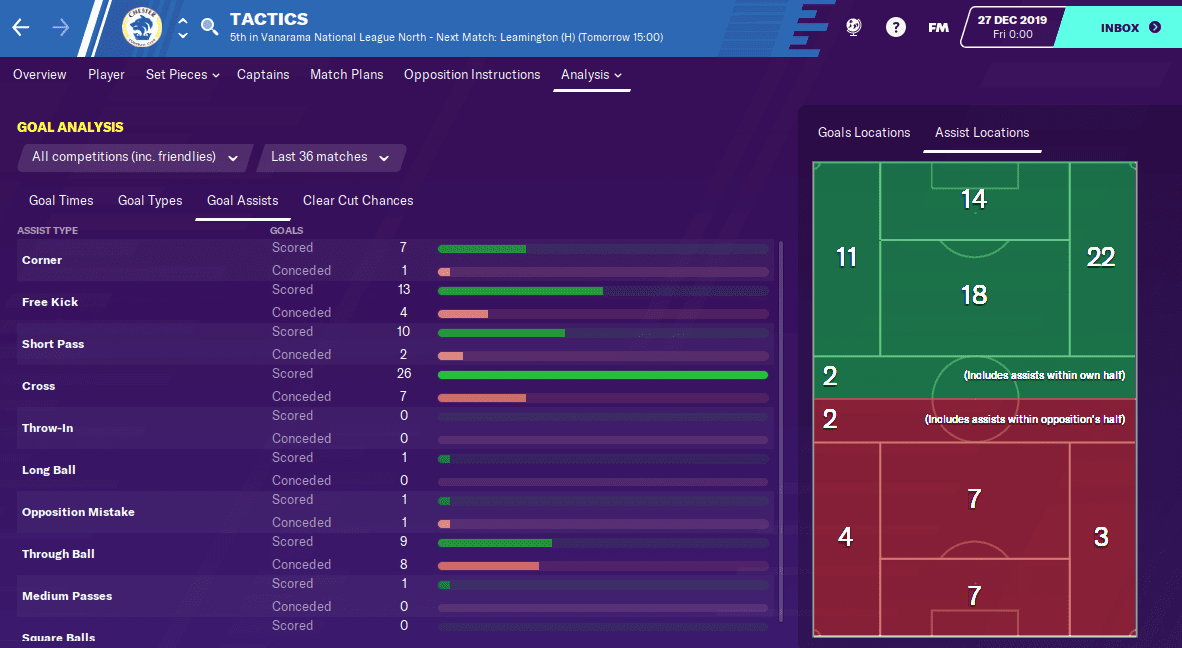 By the end of the season, Chester’s form dipped badly. Elimination from the FA Trophy in early January led to a spectacular loss of form, where we won only four games in the remaining 17 league fixtures. 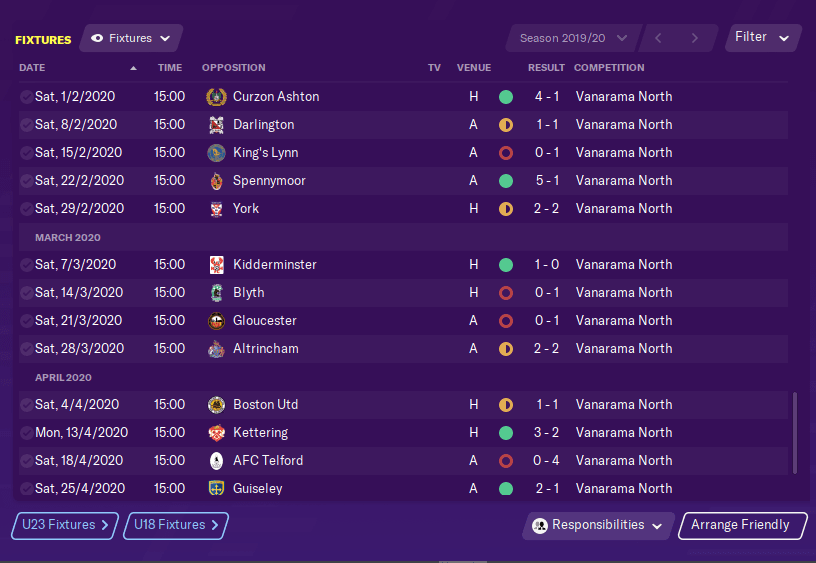 Nevertheless, we made the play-offs but were eliminated in the semi-finals against Gloucester City, comprehensively beaten 3-0. While it was disappointing to miss out on promotion to the National League, overall, it was a positive season using the wing play formation in a balanced 4-2-4 at Chester.

Individually players for the club picked up a number of impressive attacking stats within the league. George Glendon won the award for most assists, while Anthony Dudley and Akwasi Asante had the most shots and shots on target in the entire league! 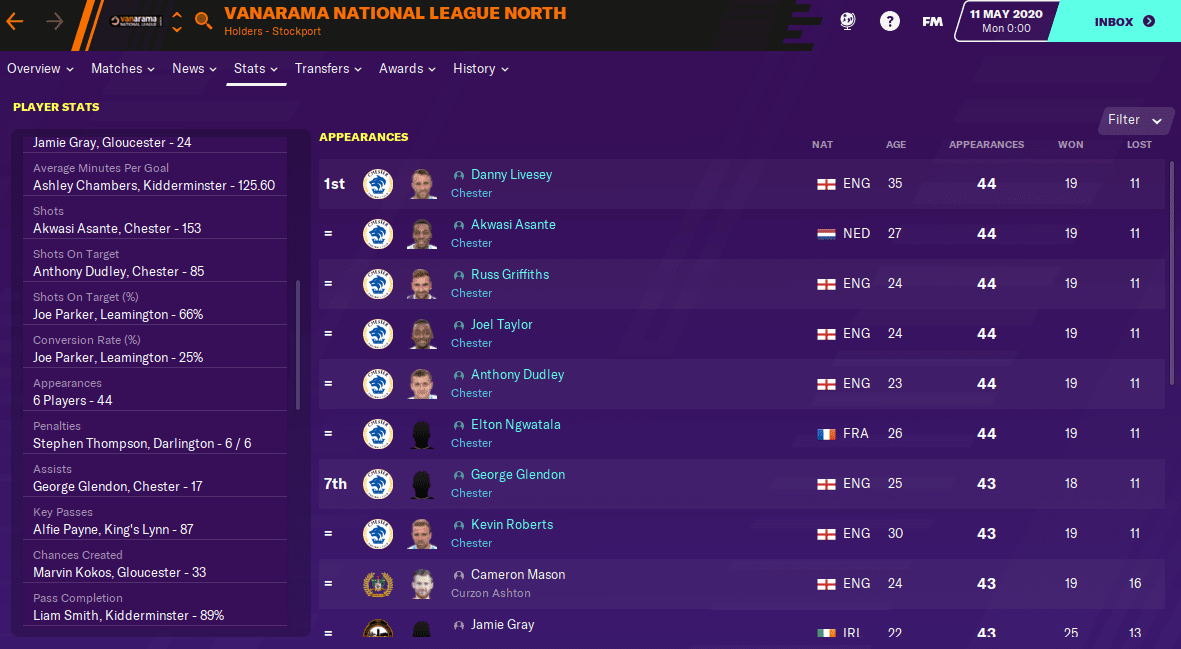 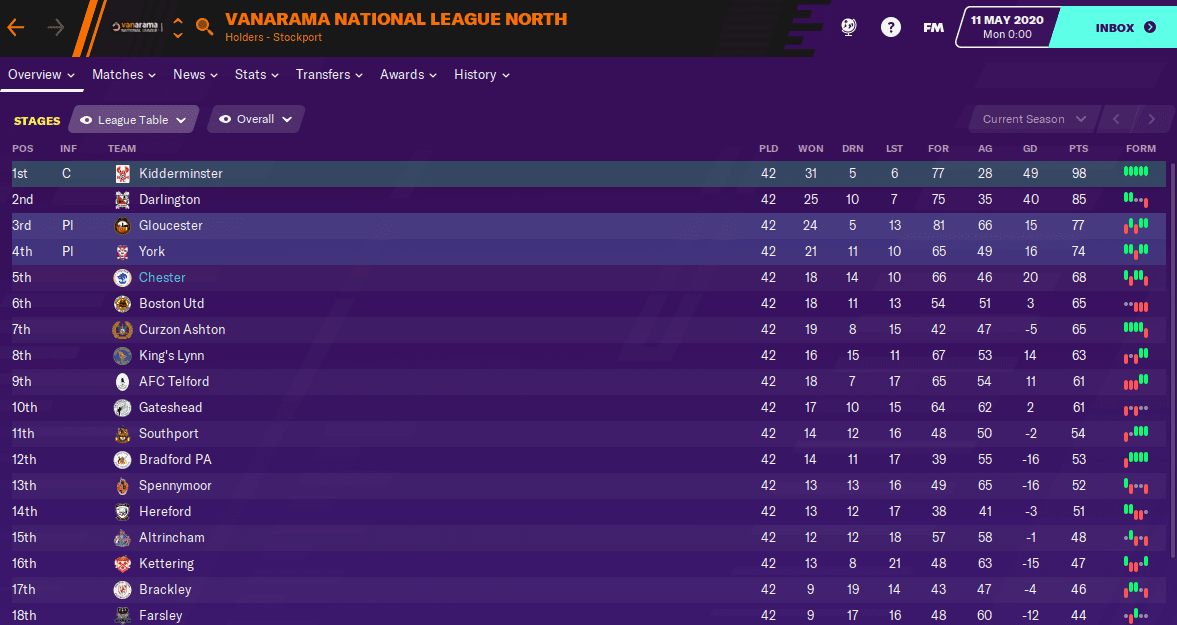 Although not the grandest of Premier League managers, and often berated by their European counterparts for negativity and physicality, Sam Allardyce and Tony Pulis provided the blueprint on how a team can be successful with a modest squad and budget.

Anti-football, usually referred to by incensed Arsenal fans whose team were often the victims of the brutal physicality of Pulis and Allardyce, relies on route one tactics based around rigid positioning and a highly structured defence and midfield.

In essence, the tactic allows the opposition to have the ball, but not to penetrate into the defending team’s half. But whilst into possession, relies on getting the ball to combative forward players who provide directness, aerial threat and disruption to the opposition defence.

With my Chester side, we went with a structured 4-4-2 (the Allardyce and Pulis favourite). The closest tactic offered to ‘anti-football’ on Football Manager 2020 is a cautious or defensive ‘Route 1’ setup or ‘park the bus’. However, the deeper, even more defensive park the bus tactic is not quite the same as anti-football and Jose Mourinho, who coined the term, would blow a casket at the mention of being compared to Pulis and Allardyce.

Of course, the physical, route 1, anti-football approach must be used in tandem with football’s ‘dark arts. Tackling instructions were set to ‘get stuck in’, ‘tighter marking’ was enforced, while time-wasting was set to a maximum.

With the aerial bombardment key to anti-football, much of the training focus was on set pieces and direct play, with a huge focus on defending and structure. 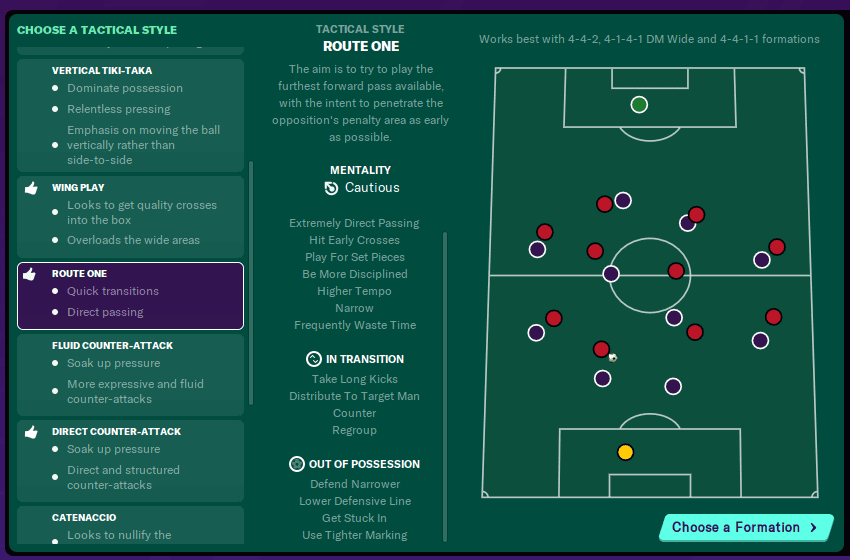 Luckily, again, the route one approach was recommended by Anthony Johnson so I was optimistic about our physical approach heading into the season.

After a promising start to the season with only four losses in the opening 13 games and nine wins, the route one approach yielded some great results. 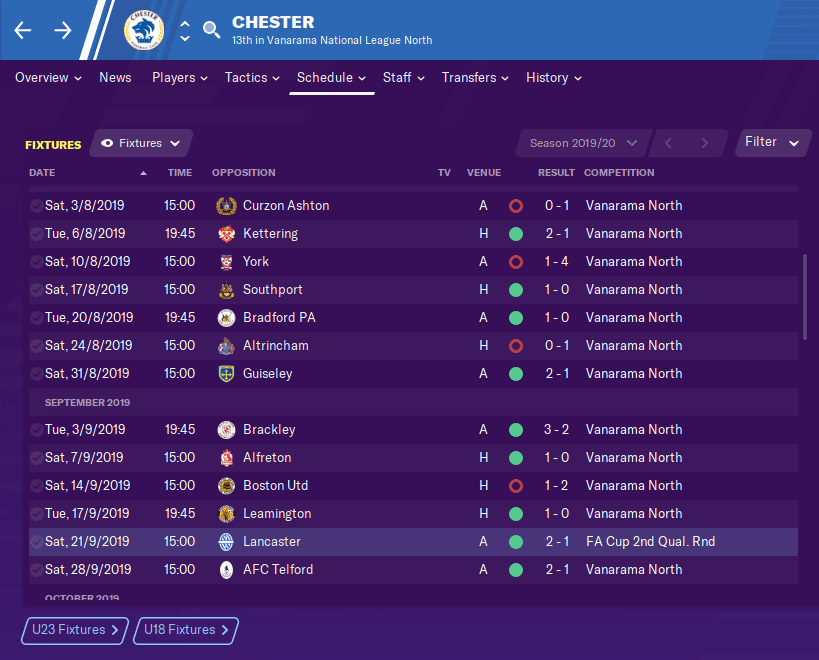 What followed was a monumental capitulation where the solid defensive approach didn’t work at all. This, mixed with the goals completely drying up, with Chester scoring just four in eight fixtures and conceding 12, meant I lost my job by November 23rd with the club 13th in the table without a win in nine games and sitting bottom of the form table. 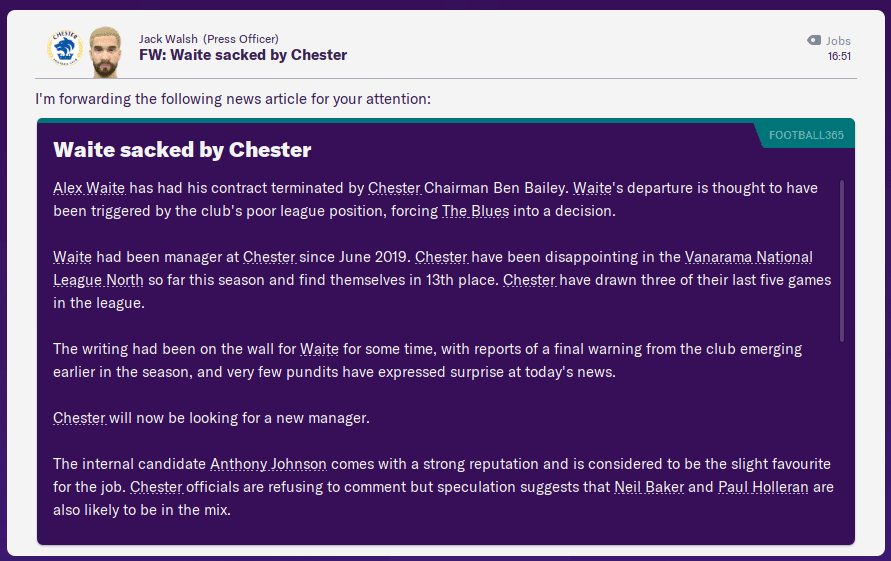 Clearly, the route one anti-football approach didn’t suit the players at Chester. In previous saves, I have found using counter-attacking tactics particularly difficult. Like this experience, they pay off in the early stages with narrow victories or draws, but inevitably always lead to a catastrophic turn of form. It is certainly an approach for the brave who like seeing chance after chance come at their time!

Almost the complete opposite to the tactics deployed by the likes of Allardyce and Pulis is the approach created by the Spanish national side, tiki-taka.

Consisting of quick, technical inter-play in the final third and slow tempo possession in the deeper positions, tiki-taka focusses on retaining the ball in order to both defend (tire the opposition) and to wait for an opening in attack (via penetration and through balls).

Spain won three successive international tournaments for the first time ever with this tactic, lifting the Euros twice in 2008 and 2012 and the World Cup in South Africa, 2010. It has since been adopted in the English Premier League with Spaniard Pep Guardiola using the approach with Manchester City, but also by Brendan Rodgers and Swansea City in the early 2010s, more surprisingly.

With highly skilled technical players required for this approach, this tactic was the one I was most concerned about with fifth-tier Chester, who’s the best technical player is a box to box midfielder George Glendon or supporting central midfielder Gary Roberts. Neither appear capable of the quality playmaker role needed to fulfil my tiki-taka dreams.

However, despite some of the lacking qualities needed for a successful tiki-taka side, I decided we would go with the deeper 4-1-2-2-1 rather than the 4-2-3-1. This was also due to the fact there was no attacking midfielder capable enough to play in the advanced playmaker role.

What also worried me was the personnel available at my disposal to play the ‘roaming playmaker’ role at the heart of midfield. But I believe it will be better than the anti-football debacle. 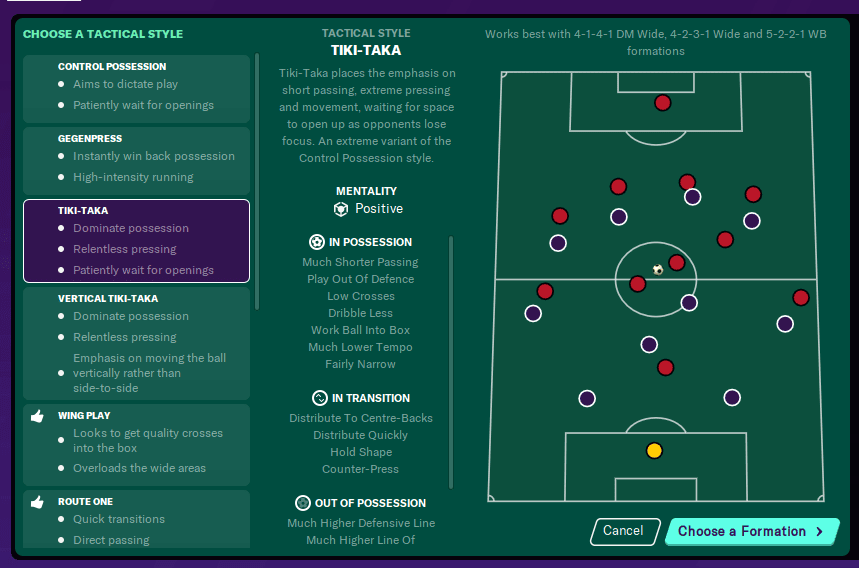 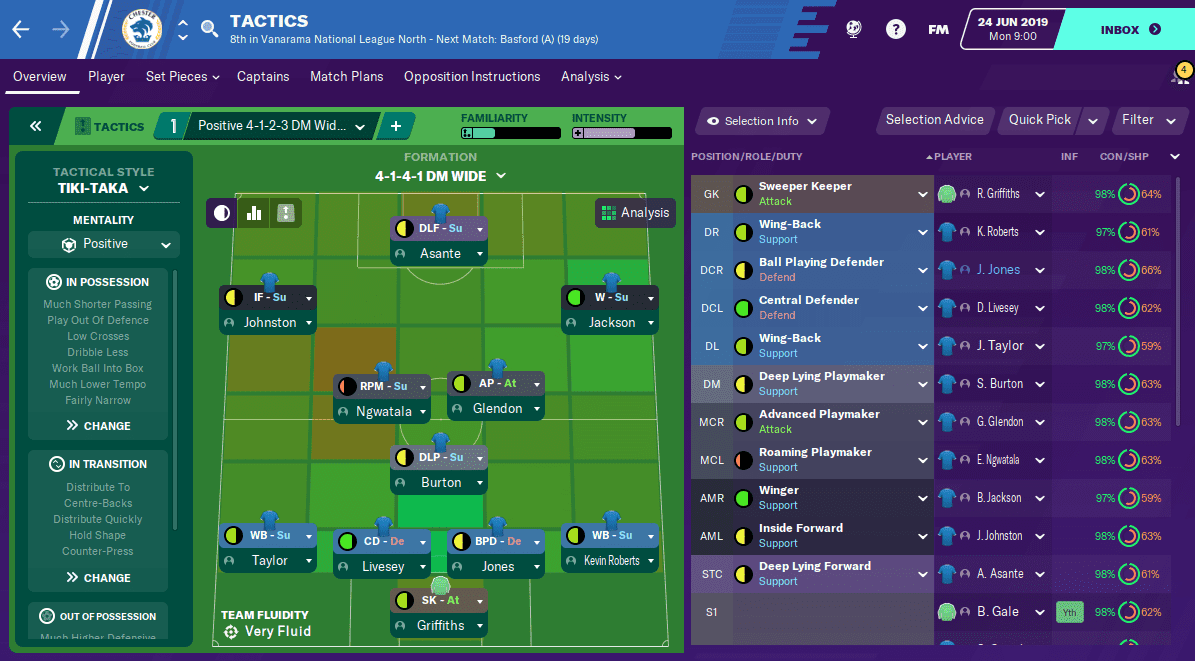 At the mid-way stage of the season, we sat in 6th in the league and were through to the second round of the FA Trophy. A great balance existed with the tiki-taka brand of football with a goal difference of +14 and the joint fourth-best defence in the league.

The majority of goals came from crosses again, while a good partnership down the right-hand side between Bradley Jackson and Kevin Richards was proving to be useful, leading to 20 assists from this side of the pitch.

Akwasi Asante again was the main striking beneficiary in the team, scoring 19 goals by this stage. While George Glendon was proving to be central to my tiki-taka philosophy, completing 1,495 passes, 400 more than the next player in the squad. 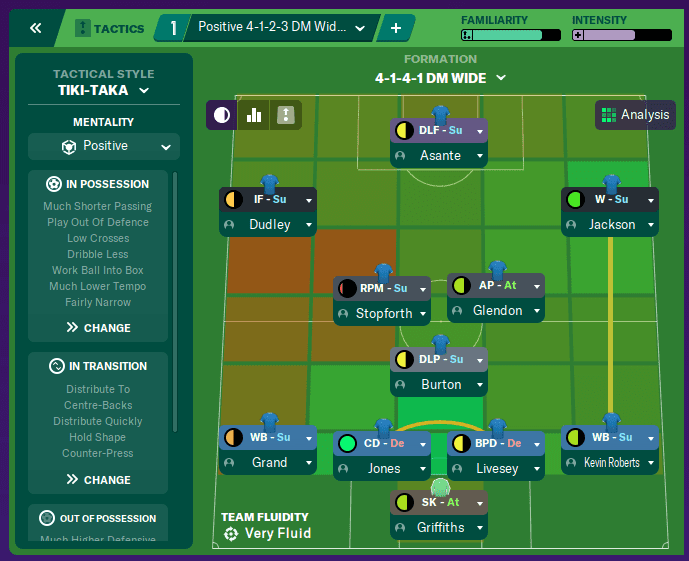 After rising as high as third and within touching distance of the automatic promotion places by late January, another late-season downfall happened. No wins throughout February and March showed the limitations of tiki-taka as injuries, fatigue and conceding a lot of goals affected the team. 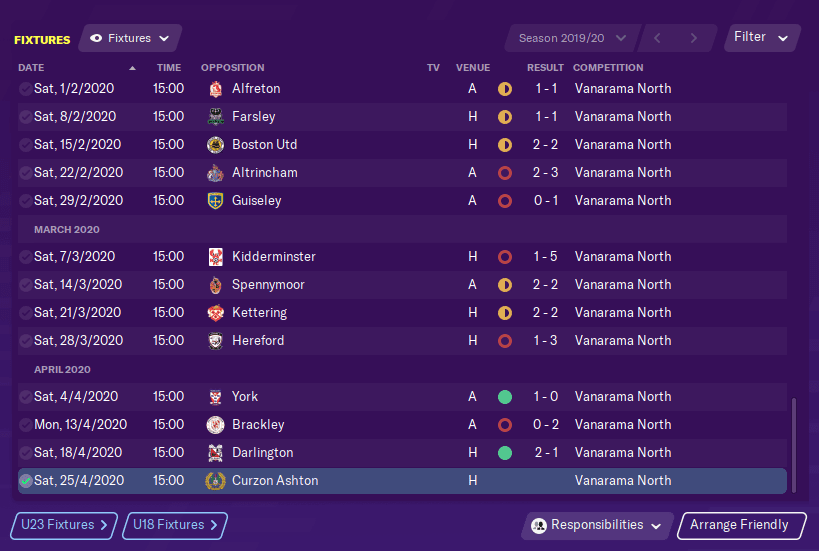 However, the draws and ability to score goals and play exciting football kept me in a job at Chester. The season’s success then hinged on a final day shoot-out between Gloucester, Chester, Curzon Ashton, Kettering and AFC Telford for the remaining three play-off places. 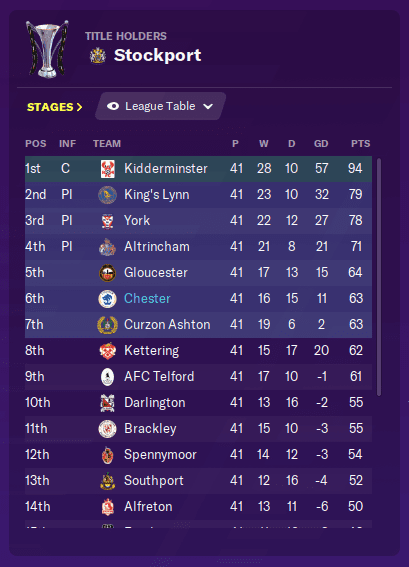 It was never in doubt as we secured our biggest league win of the season, strolling to a 4-1 victory over fellow challengers Curzon Ashton, dominating possession and clinically taking our chances leading to a 5th placed finish on 66 points.

A first-round play-off tie against Gloucester City awaited and a tight 1-0 victory, where we dominated possession, saw us through to the semi-finals against Kings Lynn Town. But it was a step too far and we lost 2-1 after overturning a 1-0 deficit in the second half, only to concede straight away to stop our promotion campaign.

Tiki-taka, however, was a surprising revelation and surpassed my expectations. It proved to be a generally solid approach, besides that late-season slump. My doubts about the players were put to rest after we finished as the fourth top-scorers in the league, but also with one of the worst defences in the Vanarama National League North.

Out of the three, I have stuck with the tiki-taka approach for next season. However, I am in the process of recruiting a host of new playmakers to take the team forward.