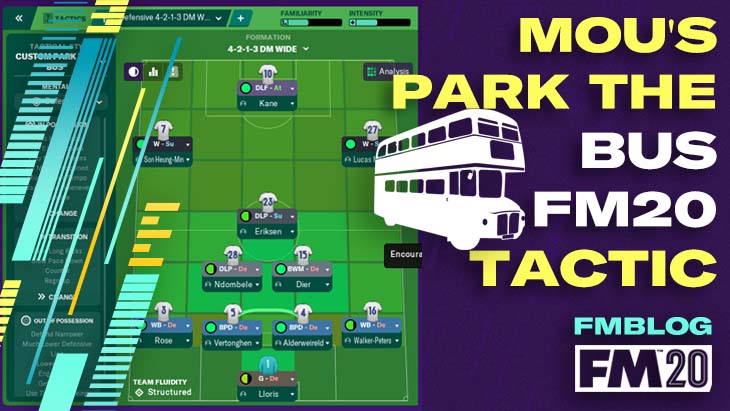 Here’s how to emulate Mourinho’s Park The Bus Tactic in Football Manager 2020.

In this post, I’ll show you how I managed to play Park the Bus tactic in Football Manager 2020 with different sides on different occasions.

First, we'll take a look at what style of football are we going to be working here.

What is Park the Bus football?

To simply put it, Park the Bus is a defensive football tactic which relies on having a strong defence which can absorb pressure and hit opponents when you least expect them to.

It's an ultra-defensive strategy, involving defending with nearly your entire team. You allow the other team possession, in exchange for occupying almost all available space in your defensive third, keeping the other team from creating any real chances at goal.

Then you counter as fast as you possibly can. Generally, you counter using a fast winger or a target forward, without committing too many men forward.

'Parking the bus' isn't generally a recipe for a winning team, since you create very few chances for yourself while allowing your opponent to continue trying to score.

Concluding, Park the bus is characterised by high-intensity running and pressing, and play long balls to the target man ensuring that the opposing team does not score. It is especially useful when defending a lead or when playing against tough teams in their home.

But, this is Mourinho’s replica of the tactics that he deployed at various clubs during his career, so let’s see how it functions. 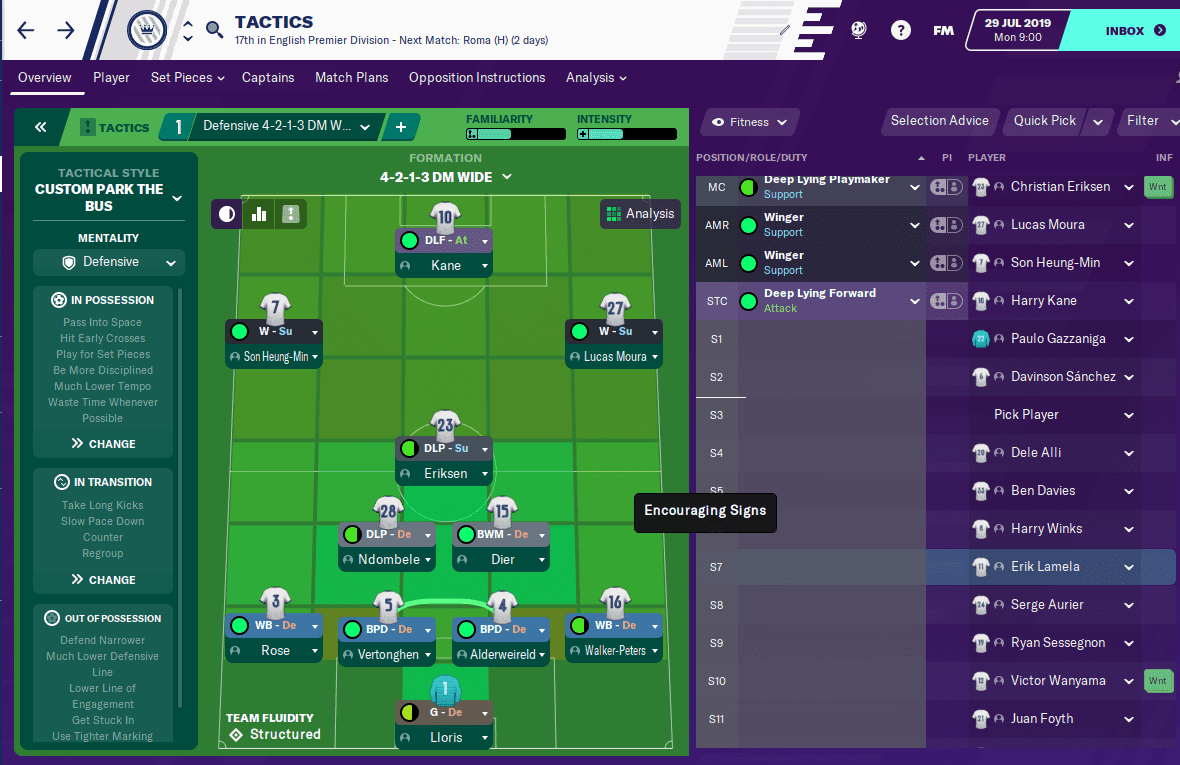 First, let me start by saying that it is possible to play Park the Bus with almost every formation in Football Manager 2020. However, since the entire formation relies on denying any space for the opponents in the team’s half it is always advisable to play a very defensive formation to suit this. Ideally with 2 defensive midfielders and full-backs who stay deep to defend.

So try to look at Park the Bus as a style of play, rather than the formation, and you can apply instructions from this article to your team, even if you’re not playing in this formation.

It’s even possible to play this 4-3-3 alternate with 2 central midfielders but deploying 2 defensive midfielders is what I found most useful.

GK – Regular Keeper with Defense Duty, he should aim to kick the ball far away to the strikers or the wingers for distribution.

DL / DR – Fullbacks/wingbacks with defending duty they will need to stick to the opponent's wide players and deny them opportunities to shoot.

DC - It is ideal to keep the defenders as no-nonsense centre backs but if they are not natural in this role you can play them in roles they are comfortable with.

DMC - Deep Lying Playmaker & Ball Winning midfielder/ Defend duty They will act as a shield for the defence and also spray the ball out wide with long passes whenever given the chance.

MCR - Deep Lying Playmaker- Support Duty – This position is given more freedom as compared to the other 2 midfielders and is tasked with creating chances by making long passes.

AML / AMR – Wingers with support duty- You can make one winger as a defensive winger with him dropping back to defence while the other winger can be given the freedom to roam and drop behind the opposition defence.

ST – Deep Lying Forward or a Target man who is good at controlling crosses. 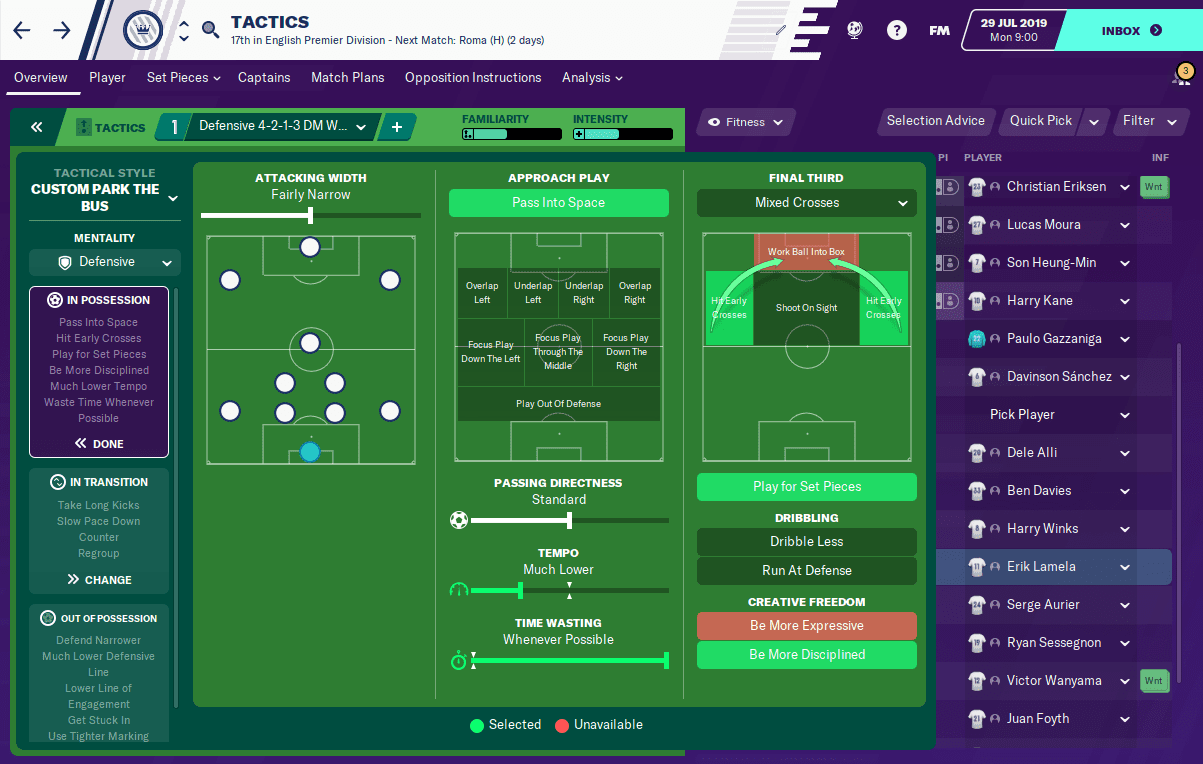 In Possession, you will need to have the “pass into space” instruction turned on and hit early crosses turned on so that you can release your wingers/striker whenever you have possession. Ensure that your players are disciplined and adhere to the tactic and you play for set pieces which will be one of the few outlets to create chances. 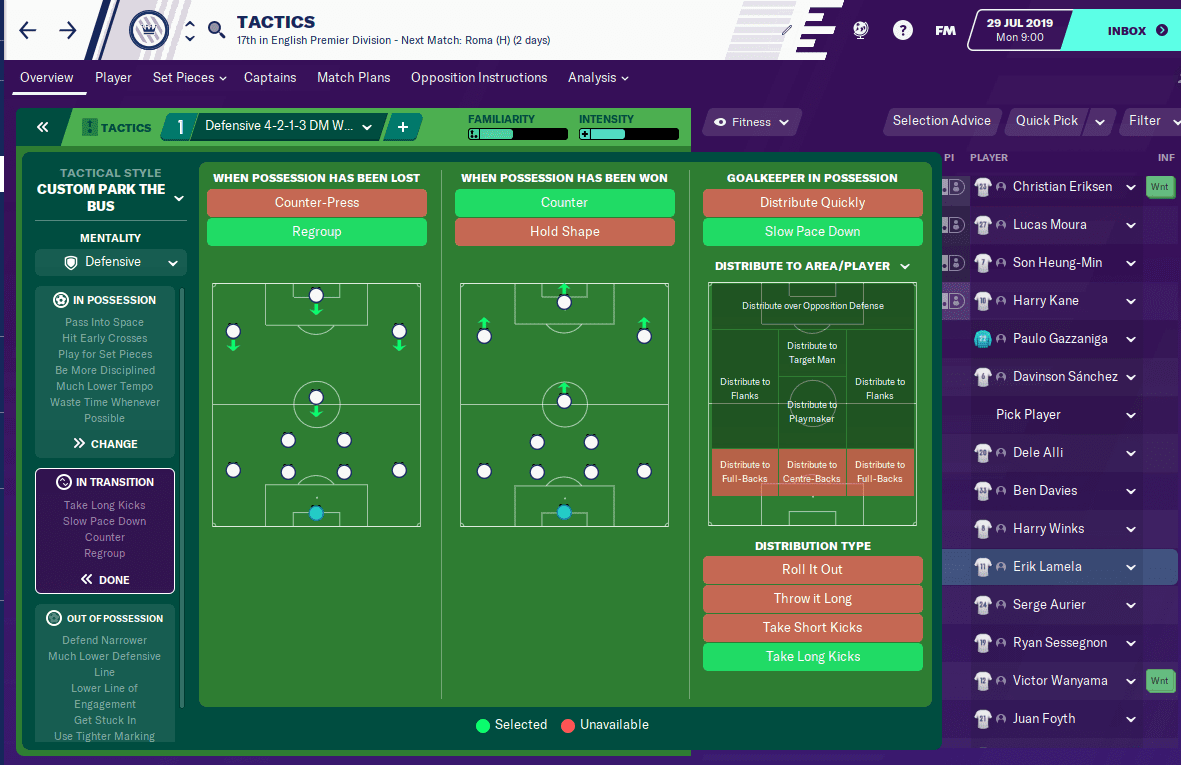 During the transition, your team will have to regroup and come back to their defensive position as soon as possible. Discipline is the main attribute for this tactic and players without a good work ethic and discipline will not do well. When you do win the ball back, you have to immediately start off counters and kick the ball long for your striker. 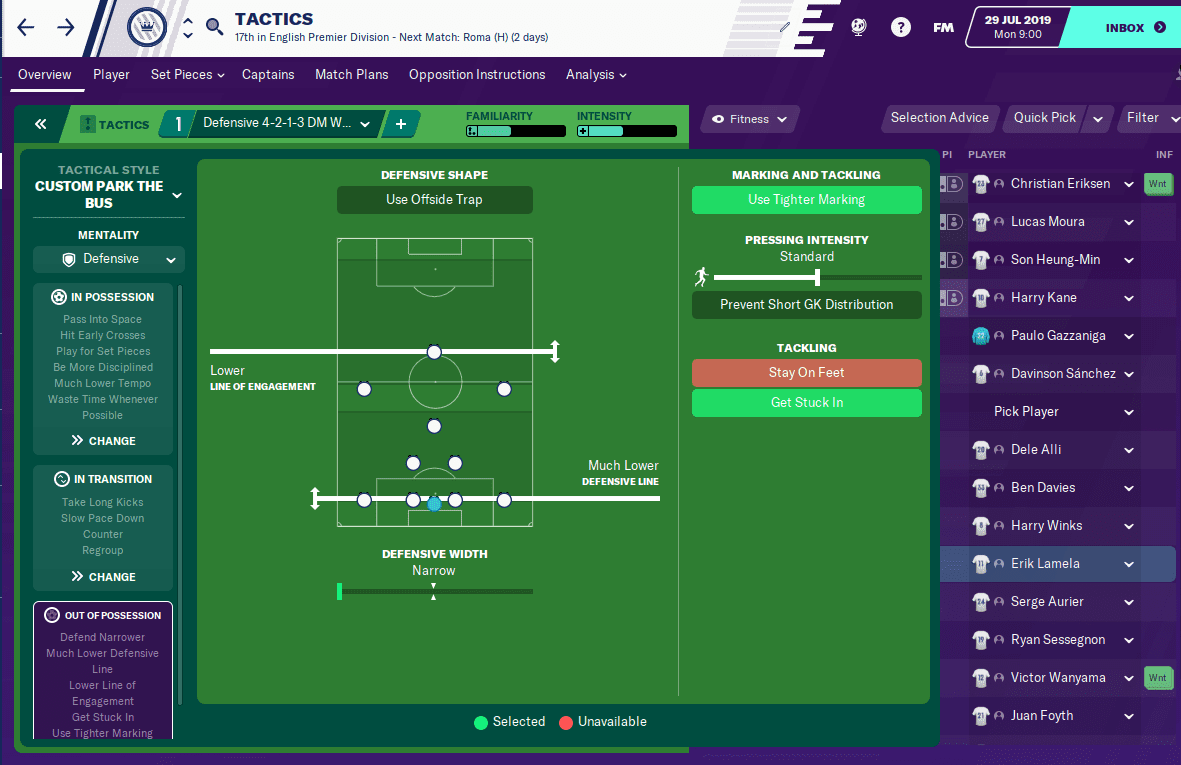 During the defence, you will have to drop all the way back to deny any space for the opposition forwards. The line of engagement should be near the halfway line. Marking will need to be tight and your team should get stuck into challenges. The defensive width should also be very narrow.

This tactic is not aimed at keeping possession at all and the team will barely have the ball. The entire tactic is aimed at frustrating opponents and limiting them to long-ranged chances. It is essential to concentrate on set pieces because those are one of the few avenues your team will have to score goals and should aim to make full use of them.

Your team will also need to waste time whenever given the chance and run down the clock as much as they can. 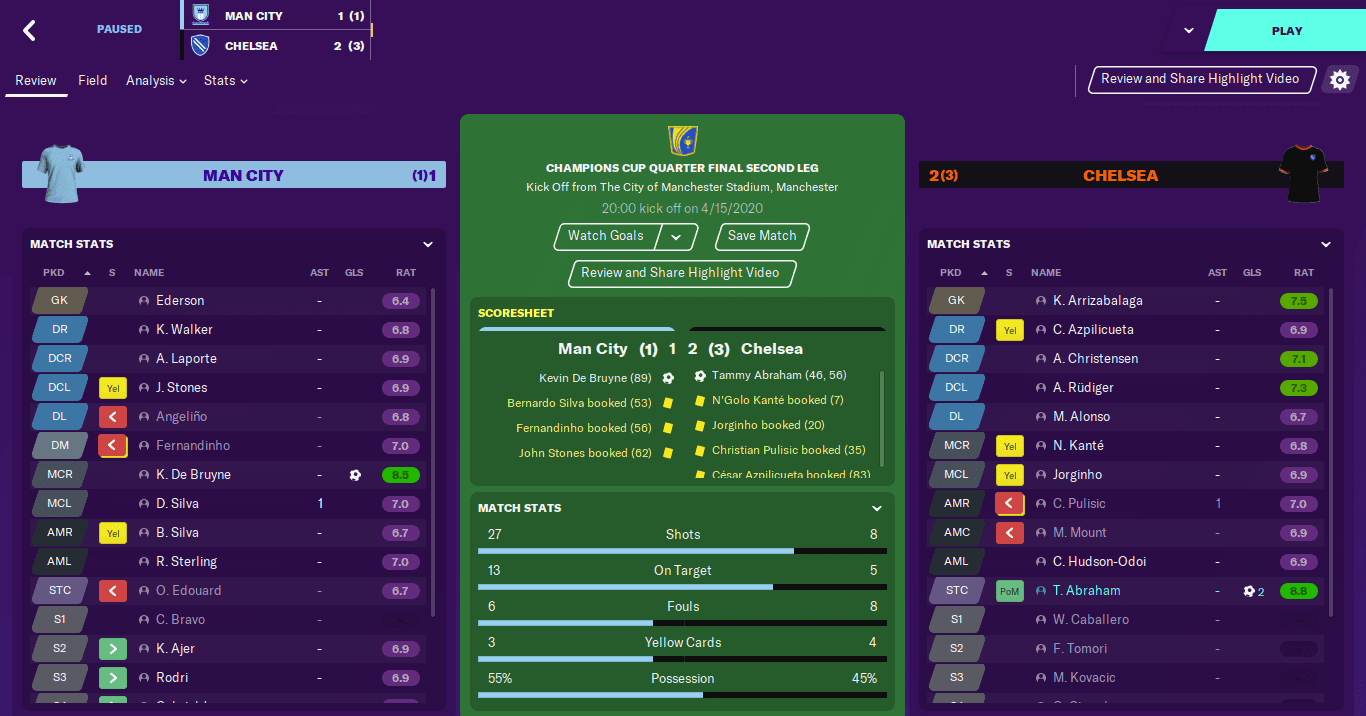 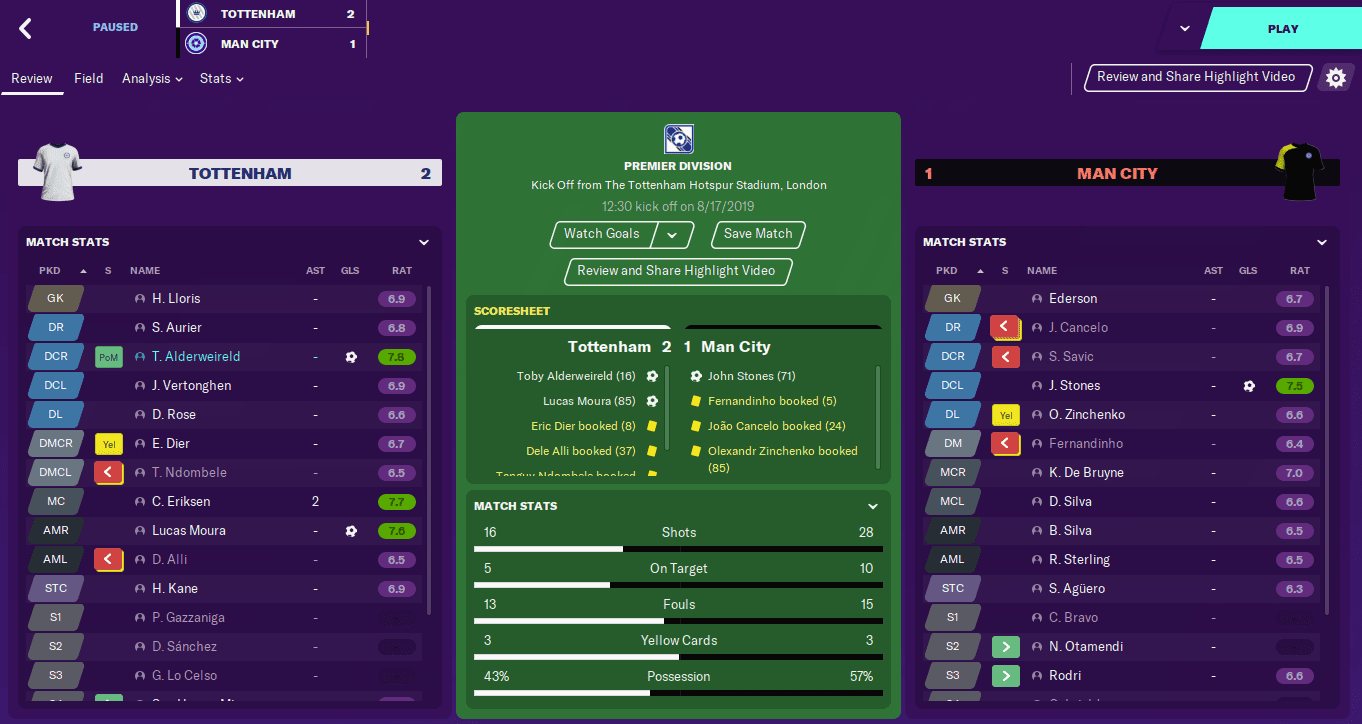 As I said earlier, this is not a tactic that you can deploy throughout the season like the other ones. You need to be selective as to where you can apply this tactic and it is especially useful when defending leads, 2nd leg of cup games or in tough away games where the opponent team is far superior to yours.

In both images, one with Chelsea and one with Spurs you can clearly see that the team barely had any possession, the shots and chances created were either through set pieces or through route one long balls. However, both the results are favourable despite facing much stronger opposition.

The opposition (Man City in both cases) have had plenty of chances but mostly from long range. Even the goals conceded were from long-ranged stunners. You will obviously need a bit of luck on your side as well.

As mentioned earlier this is not a tactic for the long term and should only be used when necessary. Your team will struggle to score goals and their only aim will be to keep giving the ball back to the opposition inviting attack after attack trying to thwart them from scoring.

Since the tactic is very negative, the board, the fans nor the players will be happy when executing this tactic and it should be used very sparingly.