Here’s how to emulate Jurgen Klopp’s 4-3-3 Liverpool Gegenpress Tactic in Football Manager 2018, or how to Gegenpress the right way in FM18.

In this post, I’ll show you how I managed to play Gegenpress football in Football Manager 2018. Just like Jurgen Klopp’s Liverpool is playing at the moment, but with a ‘tad’ better defensive record.

First we'll take a look of what style of football are we going to be working here.

What is Gegenpress football?

To simply put it, to play gegenpress football, your team after losing possession of the ball immediately attempts to win back possession, rather than falling back to regroup.

Also, to make it clear it was not Jurgen Klopp who invented this style of football.

The big Dutch teams – Ernst Happel’s Feyenoord, Rinus Michels’ Ajax Amsterdam and the Dutch National team with Johan Cruijff as captain – already used it; other teams before them also intuitively pressed immediately when losing the ball.

Concluding, gegenpressing is characterised by high-intensity running and pressing, a high-line across the pitch and counter-attacking football on the break.

But, this is Jurgen Klopp’s replica of the Liverpool tactics this season, so let’s see how it functions. 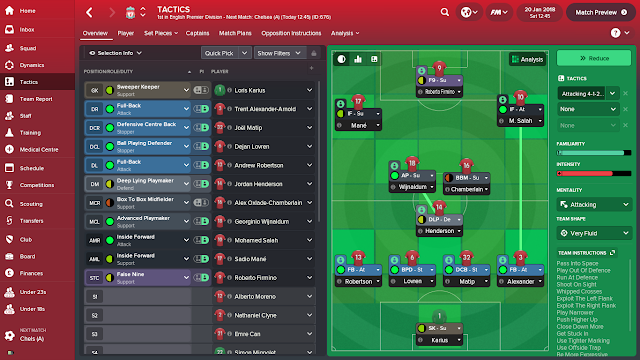 First, let me start by saying that it is possible to play gegenpress with almost every formation in Football Manager 2018. I’ve tested it with Conte’s Chelsea 5-2-3, or as some say 3-4-3, and it worked like a charm.

So try to look at gegenpressing as a style of play, rather than the formation, and you can apply instructions from this article to your team, even if you’re not playing in this formation.

I can’t stress enough how important is to have a Defensive Midfielder here. He won’t contribute all that much to goals and assists tally but will bring the ball out from the defence and secure your backline when playing with four men defence.

Jordan Henderson or Emre Can are perfect for this position in a Deep Lying Playmaker in Defend duty.

It’s even possible to play this 4-3-3 slightly asymmetric, by pushing one of your Central Midfielders forward to Attacking Midfield position.

Types of players to use and Player Instructions

Rather than giving you specific individual players, let’s take a look at which attributes to consider when assigning players in this tactic. 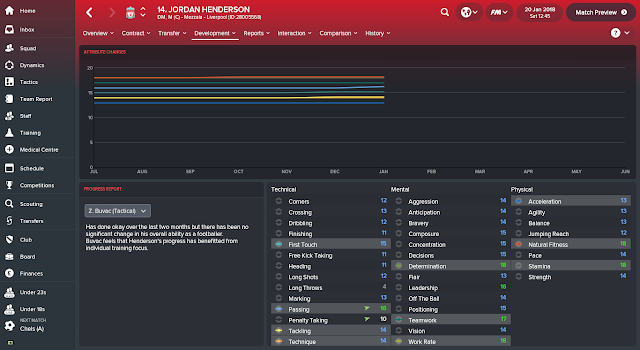 In the Technical department, players should have good first touch, passing and technique attribute. Preferable they should have a solid tackling attribute as all players will be harassing the opposition.

Mental Attributes are the most important ones. Work rate, teamwork, and determination. This is a high-tempo game, you can’t afford to have wankers in your squad.

Lastly, due to ultra-high tempo and wast amount of running your players will perform it’s vital that they have excellent natural fitness levels, acceleration and stamina.

Of course, this is generally speaking.

Your forwards still need to have high composure, or inside forwards good pace/flair/dribbling etc. But the attributes mentioned above should be combined with other ones required for a specific role.

GK - Sweeper Keeper / Support duty (If your goalkeeper can initiate counter-attacks). Goalkeeper / Defend Duty (Fewer Risky Passes, Distribute to Centre Backs - if you want more possession, slow down the pace and better build-up from the back).

DC - NEVER set your central defenders in Stopper duty. Way too many times they get caught out of position in FM2018. Preferably play them in defend duty.

AML / AMR - Inside Forward / Support or Attack duty (when setting up in which duty your inside forwards will play, take in consideration your opponent’s team. If they are strong on the flanks use your IF in support duty to help the fullbacks defensively more. If your opponent is weak on the sides, by all means, attack!) (Close Down More, Mark Tighter) 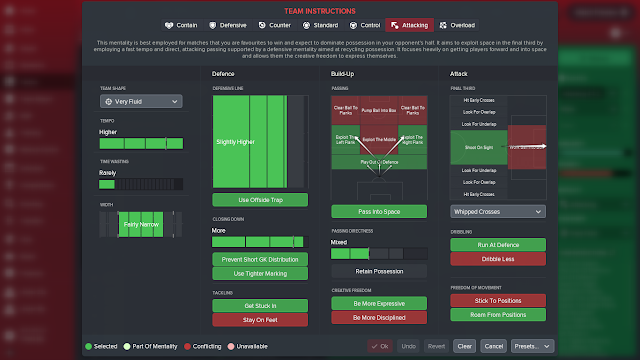 Your players need to be close to the opposition ones, so having a “slightly-higher” or “higher” defensive line is important for a good pressing football.

Playing with an offside trap is important since you’ll be pushing your lines high.

Closing down should be “more” or even “much more”, combined with Prevent short GK distribution, Use Tight Marking and Get Stuck In. There will be few yellow and red cards before your team becomes accustomed to these instructions.

It’s important to have attacking “mentality” and “very fluid” team shape so that all players take part in the offensive and defensive phases and keep the lines closer together.

Tempo should be “higher” and width set to “Fairly Narrow”, this way you’ll be attacking your opposition seconds you've lost the ball, and will drive them to the sides.

“Creative Freedom”, “Freedom of Movement”, “Shoot on Sight” and “Run at Defence” are Liverpool specific. This way we are giving players like Salah, Firminho and Mane a bit more freedom when attacking. 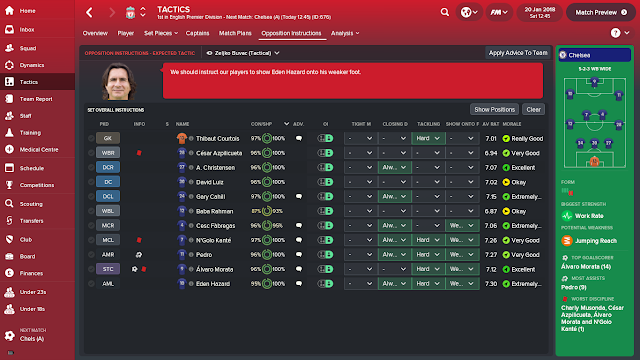 Your players will themselves press the opposition if you set your team and player instructions as mentioned above.

But you can always create pressing traps by aggressively harassing key positions to isolate the player with the ball, e.g. press RB and show onto left foot while also pressing the right CD and show onto right foot, which will isolate either when pressed.

Nothing too specific here, but make sure that you always mix in fitness training in preseason and winter breaks (where you have them), plus during international fixture breaks. 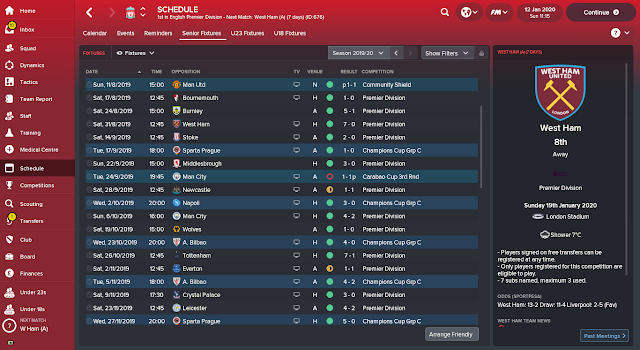 Results are nothing short than sensational. Managed to win 3 Premier Leagues in a row, played in one Champions League final, and won one FA Cup.

You can expect a high number of shots anywhere from 20-30 per game, with 2.5 clear cut chances per game on average.