While reading posts on various forums about FM, it seems to be a common issue is a lot of people feel that they cannot play two up front anymore.

The general feeling is that you lose control in midfield and can not get enough possession to dominate games, as well as not being solid enough at the back.

To be honest, in old FM’s I often found the same problem and would play 4-4-2 all the way up to the Premier League, before getting a few batterings and going 4-2-3-1.

On FM16 I got all the way up to the Prem with the mighty Chester F.C. before getting swiftly relegated playing my standard 4-4-2.

I was determined to keep two up front because my youth intake provided me with no less than five strikers that had the potential to be world class.

So I developed a 4-4-2 diamond narrow, and after getting promoted straight away, I am currently sitting 8th in the Prem after twenty points in the first twelve games.

I hope you find this useful if you want to keep two up front after promotion to a top division and you read on.

Firstly, a background to how this idea started.


I am currently the manager of the U.S.A. as well as Chester.

When I took over, there was only eighty-seven Americans to choose from, and just one could even play left midfield.

To say he wasn’t international class is a bit of an understatement, I wouldn’t even sign him if I was still in league 2! 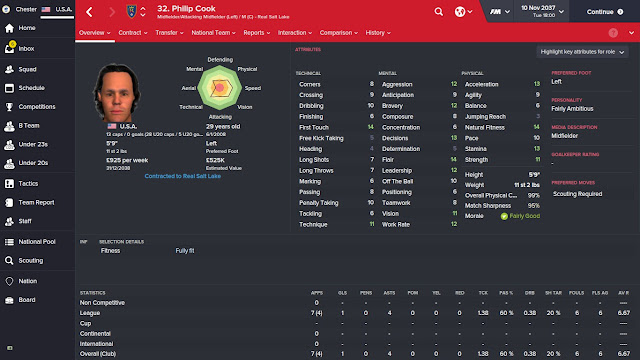 So where were the strengths of my U.S.A. team?


I had one world class DC and one world-class MC, with a handful of good forwards and my first team fullbacks could also play wing back.

I decided I needed a formation that doesn’t play a left winger, as Philip Cook was awful.

Firstly I unsuccessfully tried a 4-4-2 box formation made so famous by Brazil, but I couldn’t get it to work how I wanted, and all my players just ended up on top of each other.

I started by clicking the pre-set button on the tactics creator, but I didn’t like the shape and the way the team played.

All I was looking for was for my midfield and forwards to keep the ball long enough for my wingbacks to get forward, spray it out wide and whip it in the box.

It wasn’t happening, so what next? 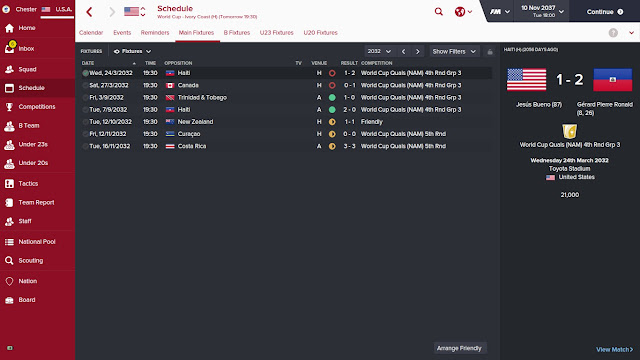 I developed my tactic by having a close look at the player (PI) and team (TI) instructions.

As for the TI’s, the tactic is set up ok by default, with normal tempo, depth and width.

I clicked exploit the middle and look for overlap, my thinking being I wanted the ball retained in the middle without playing possession football; I only want it in there long enough for the wing backs to advance.

PI wise I changed my full backs from FB(a) to WB(a). It worked, results and style picked up markedly, my midfield were passing to each other until I effectively had a 2-6-2 formation, then the ball was being whipped into the box.

But I was playing weak opposition apart from Canada and Mexico, who I struggled against.

How do I develop this further?


I looked at the PI’s again. I was leaving huge gaps in the middle and my defenders were just hoofing the ball up to no one.

A check over past games and I still could not get over 55% possession, despite four CM’s and playing bad teams.

The first thing I did was change both DC’s to ball playing defenders. This comes with more risky passes as default, but I put the passing range to short to negate this.

‘Who are they going to pass short too?’ I hear you say?

To help link the defence and midfield together, I put my DM onto a halfback role.

The description was just what I was after, someone with a defensive mentality who would drop deep to get the ball, often fitting in between the DC’s. Great I could work the ball out and stop the aimless hoofs.

Next to get some attention was the rest of midfield.


The right-sided of the two was set to be a box-to-box midfielder and the left of the two to a roaming playmaker role.

My reasons are quite simple and logical.


I wanted both players to come short and link up with the anchorman, giving him options to pass too, and both roles involve getting up and down the pitch.

I put my world-class midfielder Tom Smith in the roaming role as it was his best role, and since the roaming playmaker is the heartbeat of the team, this was a perfect choice.

The attacking midfielder caused me a headache.

OK, so now I have the midfield linking together, passing well, and coming back to cover when the opposition has the ball.

But what happens when both of my players in the midfield strata come deep together?

Their only options would be to give it back to the anchorman or give it out wide too early.

So I needed a role that would mean my AMC would also come deep to get the ball when required, linking my whole defence and midfield together.

I chose an attacking midfielder on attack duty.

‘Attack duty? Are you mad?’


I can hear you saying. Not at all, let me explain.

The attacking midfielder comes with an attack or support duty.

You would assume the attack duty would see them more advanced, and the support duty would be deeper.

However, this isn’t true.


On support duty, the AMC stays between the opponent’s defence and midfield and rarely moves.

If the opponents have a DMC playing, our AMC can end up marked out the game as he can’t get the ball on support duty.

On attack, however, the AMC comes deep to get the ball, and turns and runs at the opponents, giving the ball away too often.

This duty comes with shoots less often, dribble more and more risky passes on default, which can lead to him giving the ball away a bit too often.

I changed this by making his passing range shorter, and clicking hold up the ball, it did help us keep possession in the middle until the wing backs advanced.


I suppose many classic combinations would work here.

I decided on deep-lying forward support with an advanced forward on the attack.

I play fluid and standard, hence the reason why I need one of my forward to be a support duty.

Four players with attack duty are probably too many for fluid and standard, most tactical guides would say two or three maximum, and I went for three originally before changing my ACM to do exactly what I wanted.

I also need my wing backs on the attack, so they fly forward whenever we have the ball, and I need my other striker on the attack to stretch the play.

Otherwise, everyone is coming deep to get the ball, the only way we have to score is from crosses, and we become one dimensional. 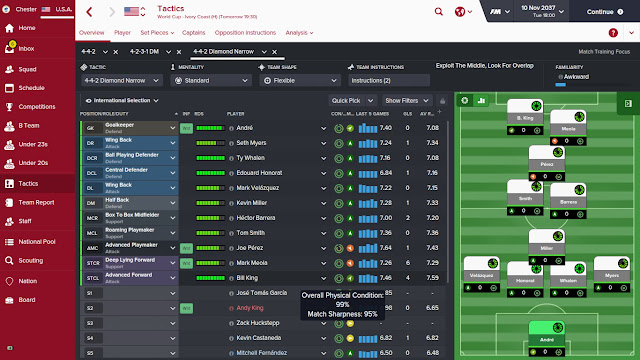 How effective has it been?


Well with the U.S.A. I have won 3 trophies, the conf cup playoffs twice and the gold cup in the one time I could play in it.

I qualified for both world cups, and I have advanced to the semi-final in both confederation cups, including beating Argentina 2-1 recently in the group stage.

In the one world cup, I have completed, I won all 3 group games before losing to eventual world champions Mexico.

And how did this relate to Chester and staying in the Premier League with keeping a 4-4-2?


Well after relegation I changed to a copy of this tactic, got promoted straight away and now sit pretty as I explained in the opening paragraph.

Results are not too shabby, especially since half my squad and team are through my youth team. 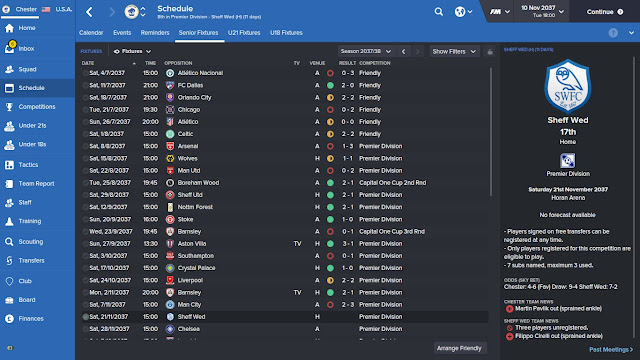 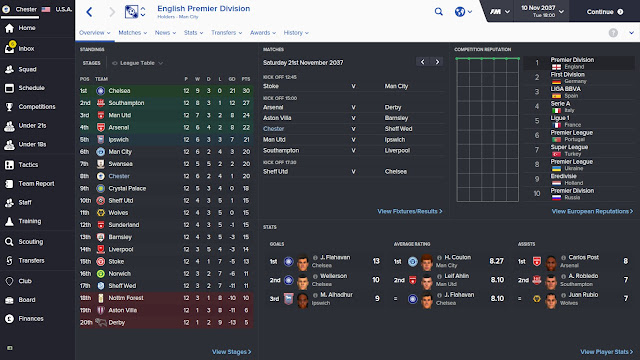 I do make alterations with Chester. If I play this when away against a strong side I sometime unclick the look for overlap.

I swap the midfield roles around too, depending on who I am playing.

I hope you have enjoyed reading this guide and you try it and find it useful. Thanks, Mike.