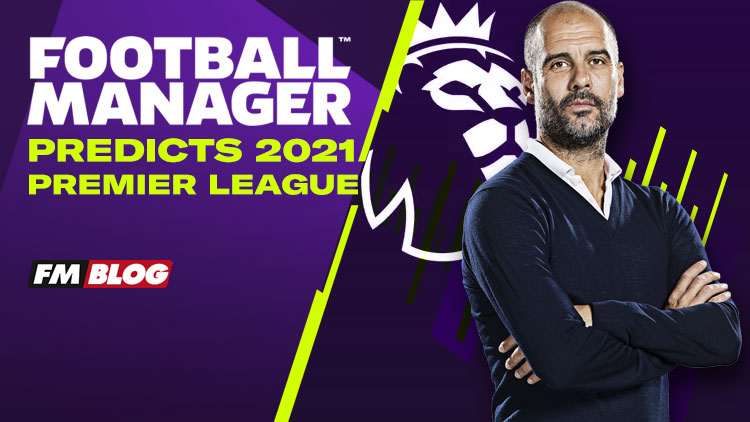 Football Manager is known of successfully predicting the future outcomes in a more than few occasions, so in this article, we will simulate the 20/21 season in the Premier League and see how the up and coming season will finish with the help of Football Manager.

Many teams made some exiting transfers like Chelsea, Spurs and Everton.

Firstly, we will look up the season midway through and then we will jump into the final day of the season to see the results.

To start, we will see the predictions for the 20/21 season by Football Manager.

The surprise of the prediction are Sheffield United who are predicted to get relegated after a superb last season, where they finished in 9th place and battled for a European place as well.

Now we will simulate the game till January 1st and see if the predictions are correct. 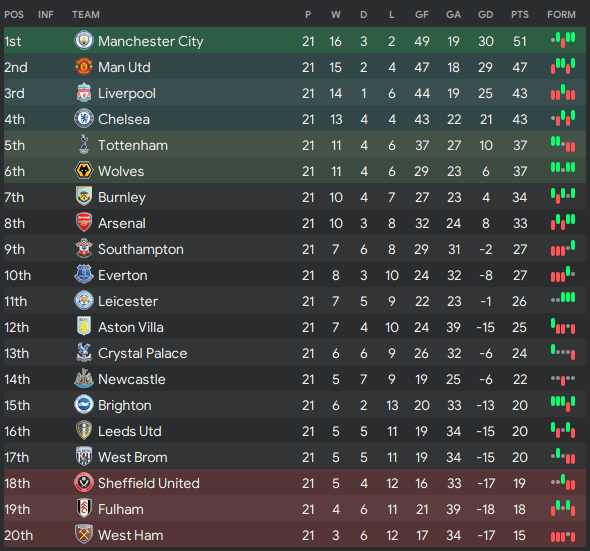 We are on January 1st, the results so far are not as close to the predictions but are not surprising as well.

Manchester City are leading the table with a four-point gap from their archrival Manchester United. Not a big surprise in the top 6 positions, Leicester and Everton, are expected to fight for Europe but are currently standing in mid-table places.

Sheffield United relegation battle was predicted correctly by Football Manager 2021, and they are having a hard time in their second season in the Premier League and will hope for a better second half of the season.

West Ham and Leicester City are both underperforming resulting a manager sacking, Marcelo Bielsa left Leeds United and is replaced by Brendan Rogers at Leicester City following his departure.

Manchester City are having a great season, their players are performing and there is no way to stop them. Sergio Agüero is leading the goal-scoring list with 15 league goals followed by Arsenal's Alexandre Lacazette with 13 league goals and his fellow teammate, Bernardo Silva with 12 league goals.

Kevin De Bruyne does what he does best, assisting goals, and is leading the assists list with 12 of them so far. Unusual name in the assists list, Southampton's Oriol Romeu is enjoying a fine season with 10 assists, while the new Manchester United signing, Donny van de Beek is following him with 8 assists so far.

Now It's time to continue to the rest of the season and see what surprises are awaiting us at the end of the season.

We've simulated to the end of the season, and now it is the time to check the results. 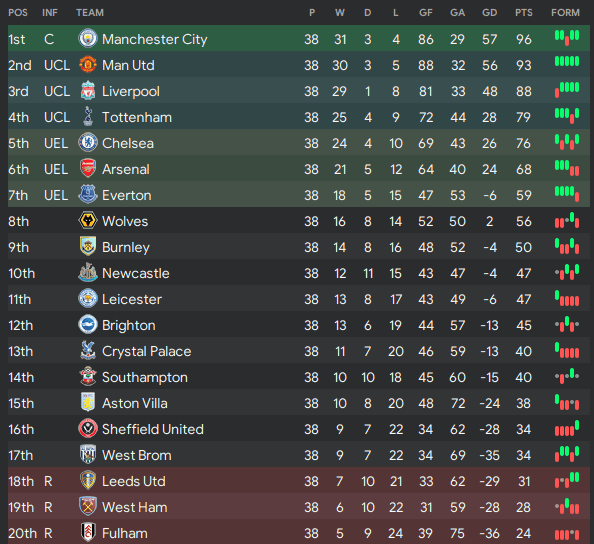 Manchester City have brought the title back to Manchester, with 96 points, Pep Guardiola's side made no mistakes and retained top spot since late November. Manchester United, Liverpool and Tottenham have all secured Champions League football for next season, Liverpool with an underperforming season only finishing 3rd while aiming to win the league back to back.

Everton have made a great late run to finish 7th and secure Europe League football for next season.

Leeds United and Fulham FC couldn't hang in the Premier League and are relegated back to the Championship, West Ham United are the massive disappointment this season, and they will try their luck in the Championship next year. Aston Villa have sacked Dean Smith although managed to secure 15th place for them.

There was no stopping Sergio Agüero this season, equaling his goal tally from the 14/15 season, netting 26 league goals. Roberto Firmino scored 20 league goals for Liverpool and the surprise of the season, Bruno Fernandes scoring 19 league goals and assisting 18 goals. Kevin De Bruyne lost the top spot and finishes with 16 assists, Donny van de Beek retained the 3rd place with 14 assists.

The English Player of the Year is Bernardo Silva, the Portuguese elite player, scored 15 league goals and assisted 12.

The English Young Player of the Year is Trent Alexander-Arnold, the young Englishman has won the award back to back. The manager of the year is Ole Gunnar Solskjær, United's legend finished 2nd and secured Champions League football in Old Trafford for next season.

The Premier League, considered to be the best league in the world, Football Manager predicted that Man City will win the league this season and West Bromwich Albion will survive relegation this season. The 20/21 season will definitely be a season to keep an eye on and enjoy the great football that it is producing.