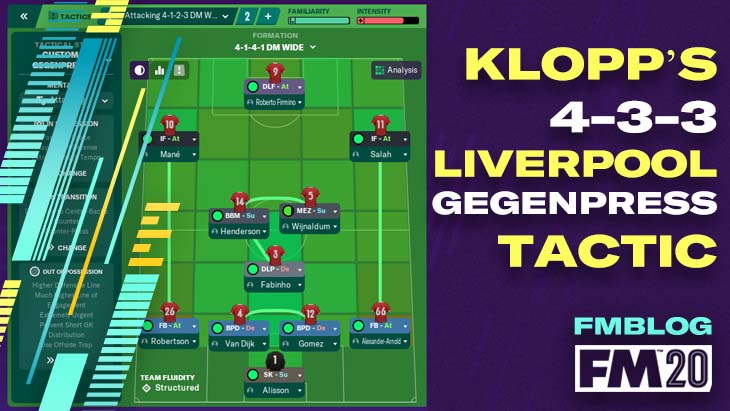 In this post, I’ll show you how I managed to play Gegenpress football in Football Manager 2020 just like how Liverpool are doing in real life.

First we'll take a look of what style of football are we going to be working here.

What is Gegenpress football?

To simply put it, to play gegenpress football, your team after losing possession of the ball immediately attempts to win back possession, rather than falling back to regroup.

Also, to make it clear it was not Jurgen Klopp who invented this style of football.

The big Dutch teams – Ernst Happel’s Feyenoord, Rinus Michels’ Ajax Amsterdam and the Dutch National team with Johan Cryuff as captain – already used it; other teams before them also intuitively pressed immediately when losing the ball.

Concluding, gegenpressing is characterised by high-intensity running and pressing, a high-line across the pitch and counter-attacking football on the break.

But, this is Jurgen Klopp’s replica of the Liverpool tactics this season, so let’s see how it functions. 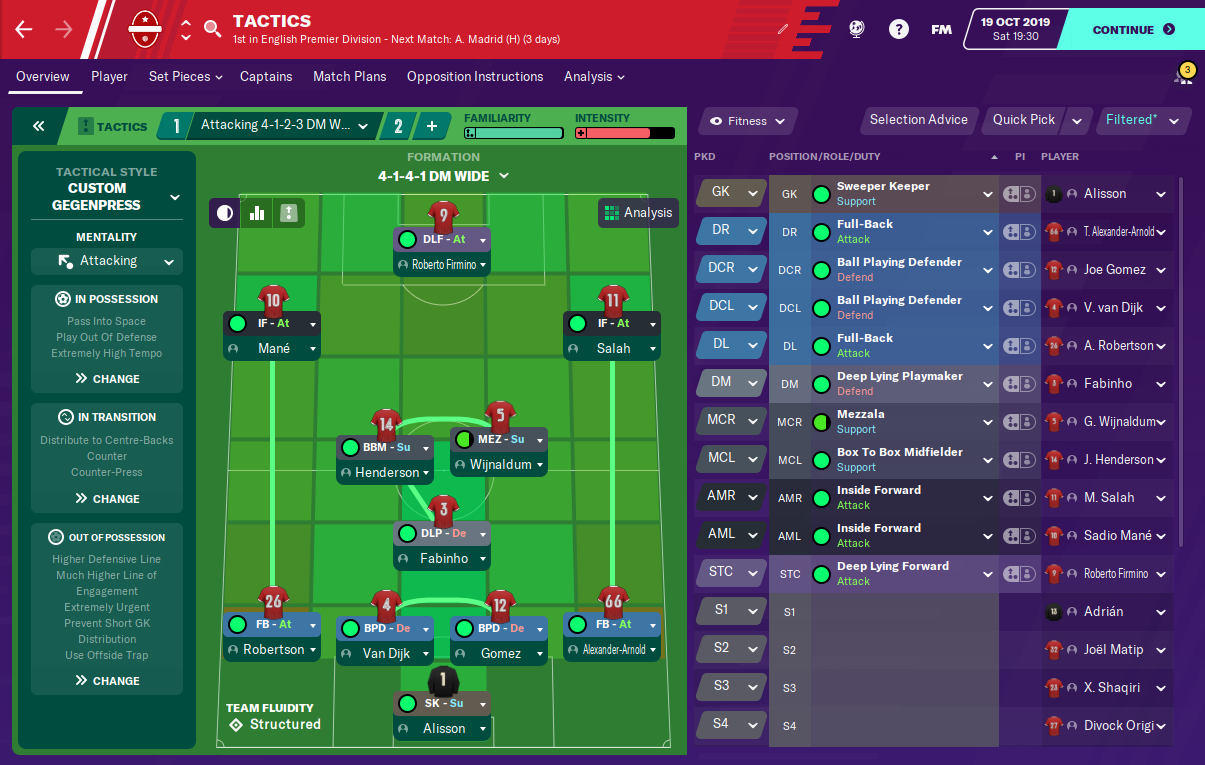 First, let me start by saying that it is possible to play gegenpress with almost every formation in Football Manager 2020. Since we will be replicating Klopp’s tactic we will be playing the 4-3-3 formation which also incidentally suits best for the Liverpool’s squad players.

So try to look at gegenpressing as a style of play, rather than the formation, and you can apply instructions from this article to your team, even if you’re not playing in this formation.

I can’t stress enough how important is to have a Defensive Midfielder here. He won’t contribute all that much to goals and assists tally but will bring the ball out from the defence and secure your backline when playing with four men defence.

Jordan Henderson Or Fabinho are perfect for this role as a deep lying playmaker with defensive duty.

It’s even possible to play this 4-3-3 slightly asymmetric, by pushing one of your Central Midfielders forward to Attacking Midfield position.

GK - Sweeper Keeper / Support duty (If your goalkeeper can initiate counter-attacks). Goalkeeper / Defend Duty (Fewer Risky Passes, Distribute to Centre Backs - if you want more possession, slow down the pace and better build-up from the back).

DL / DR - Fullbacks with attack duty, both TAA & Robertson are very good attacking full backs and have excellent crossing. They will contribute a lot to the teams attacks.

DC - Both the central defenders should be set as Ball Playing defenders and will initiate passing from the back when needed.

DMC - Deep Lying Playmaker / Defend duty Both Fabinho and Henderson are very good at this role.

MCL - Box to Box / Support Either Keita or Henderson will work well in this role.

MCR – Mezzala support – Wijnaldum or Oxlade Chamberlain are very good at this goal and will contribute goals especially with a few long range efforts.

AML / AMR - Inside Forward /Attack Duty – Salah and Mane are perfect inside forwards and are probably the best players in the game in this position. 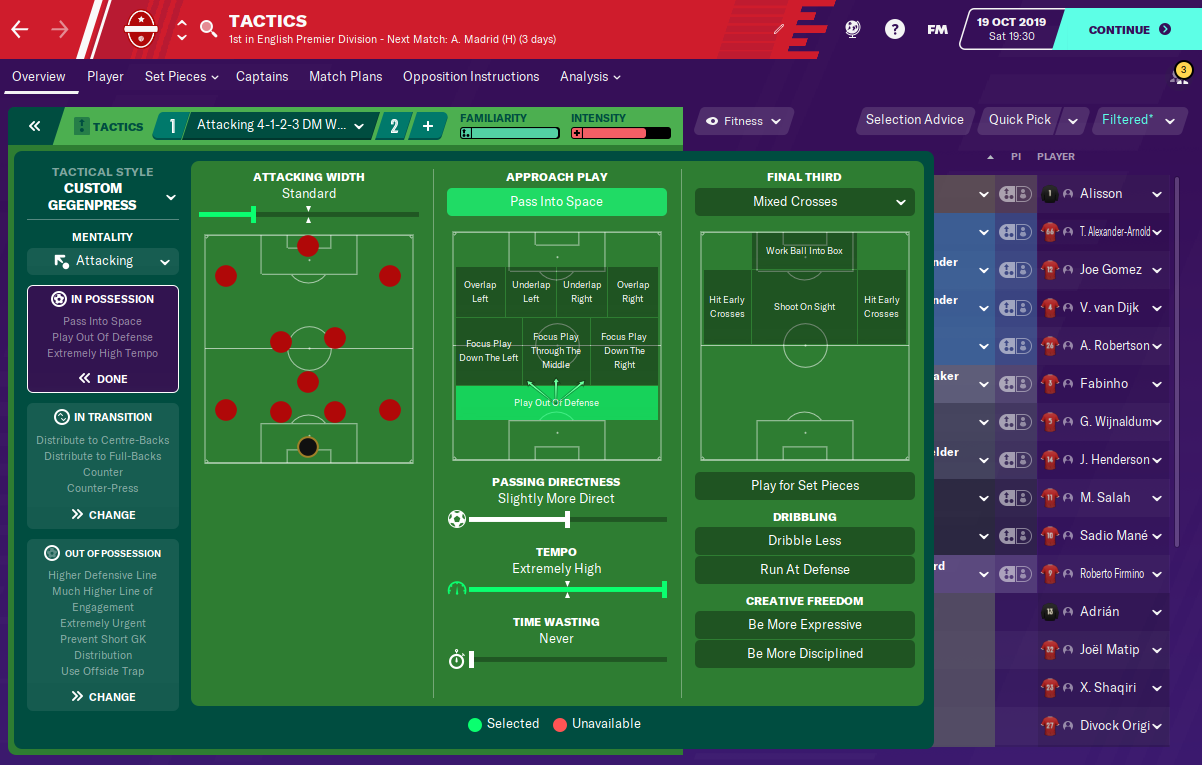 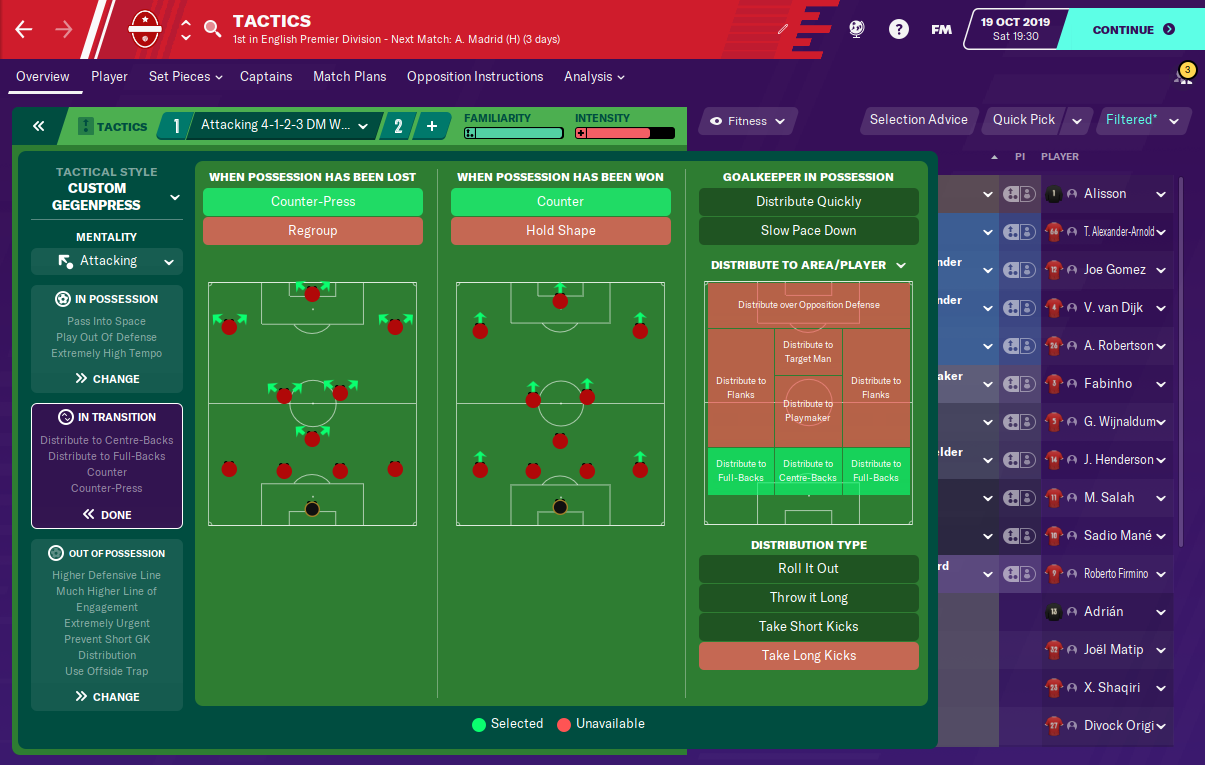 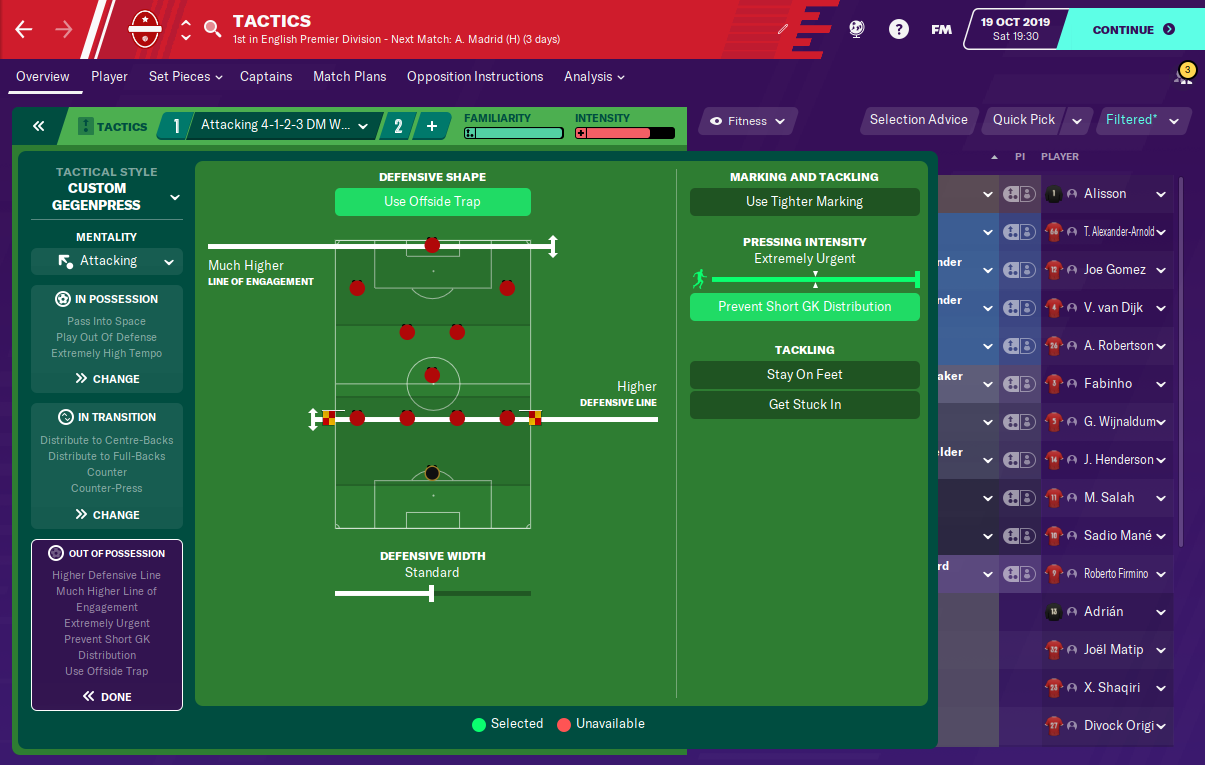 Be wary that the Gegenpress is a highly demanding tactic and will take a lot from your players.

In Possession you will need to have the “pass into space” instruction turned on so that the players can move the ball quickly, the tempo should be extremely high with a relatively direct passing style.

During transition, you will need to have the counter press and counter instruction turned on. This will enable a fast transition of play when you win the ball back. You will also need to distribute the ball to either the centre backs or full backs and they will start the attack.

It is advisable to use the offside trap because the defensive line is very high as you will aim to win the ball high up the pitch and start attacks immediately. You can also press the opponent keeper and prevent shorter distribution trying to win possession back quickly.

This tactic is not aimed at keeping possession rather at fast transition so you will rarely have too much possession but you can hit teams before even they realise there is trouble. You can base opponent instructions based on the strength of your opponent.

With your inside forwards always looking to cut in, the overlap will come from the attacking fullbacks who will keep pumping in crosses keeping the attack going on and they are very important players in this system. 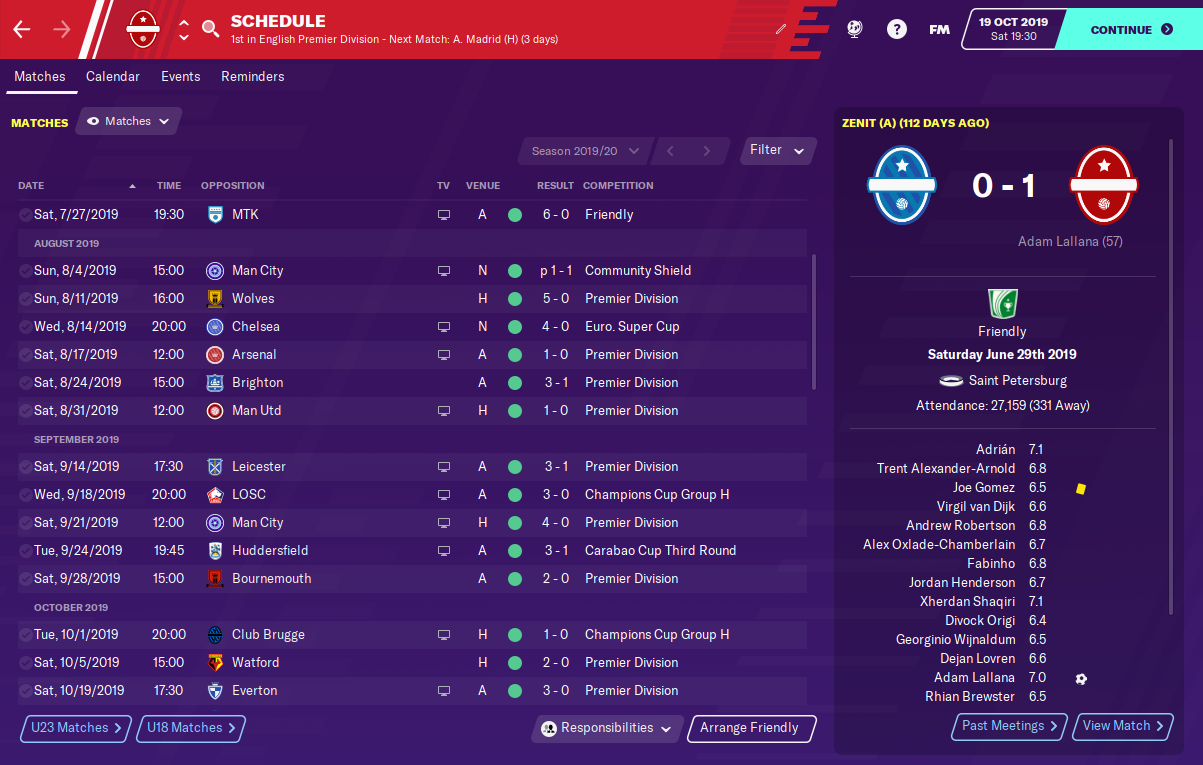 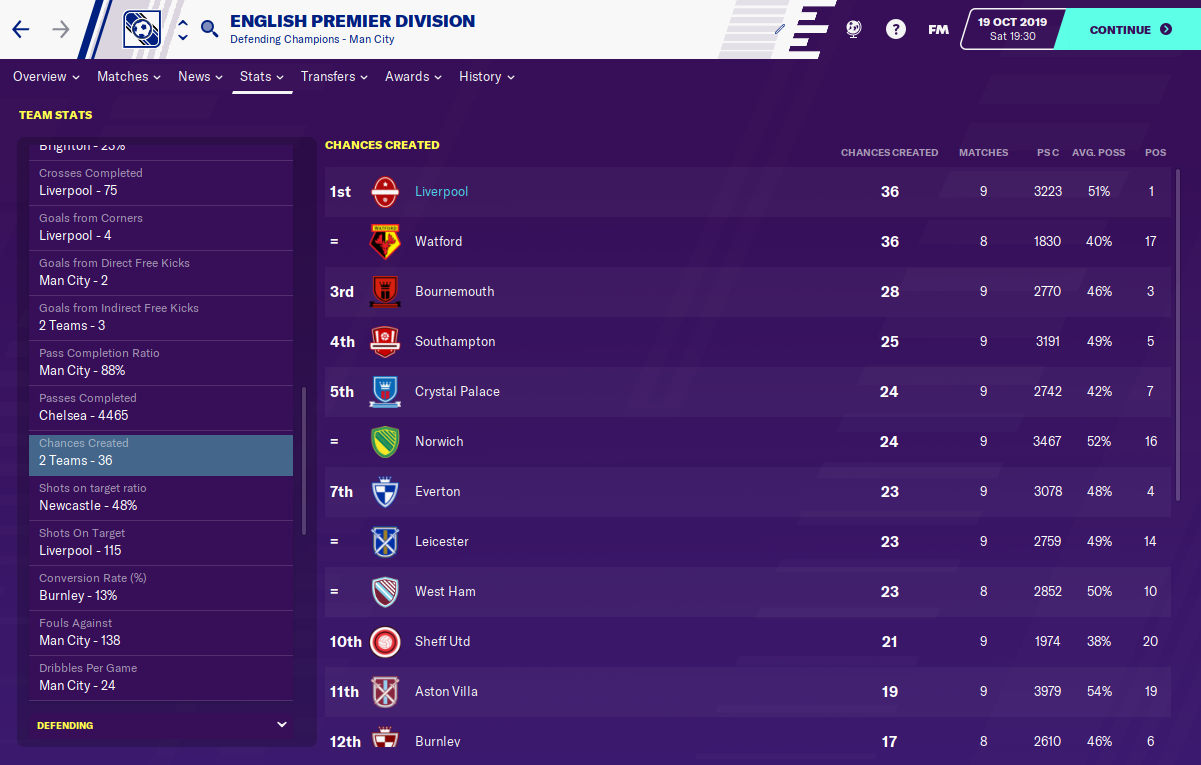 The 2nd image shows the dominance in attack for the club with 36 chances created with the best cross completion ratio in the league. Also, it is very important to work on your set pieces as they are a crucial outlet for goals and the team already boasts of some very good set piece takers and players who are highly reliable in the air.

One of the few cons of this system is the extremely high intensity of this system which will tire out players very easily. It will also leave them prone to injuries and it is important to scout players with good fitness for this reason.

The players will also find it hard to play multiple games during fixture congestion with this tactic and it is wise to alternate to a less demanding system once a result is guaranteed.