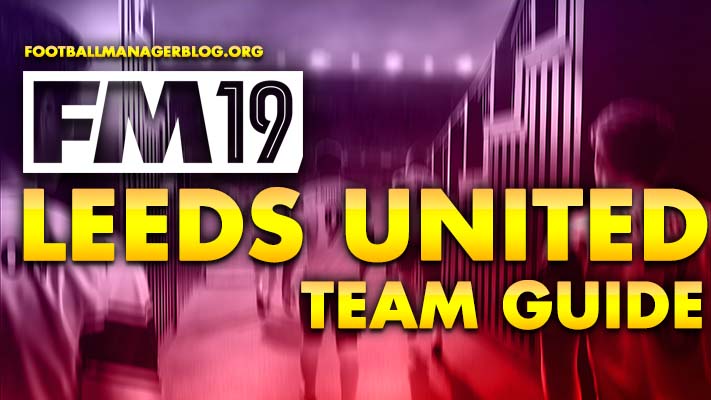 One club that stands out most as a challenge in FM19 is surely the great Leeds United, this is the The Whites team guide for Football Manager 2019.

It’s been fifteen years, long fifteen years since Leeds United were last in the top flight of English football.

The 2018/19 has been the stuff of dreams for Leeds fans, Marcelo Bielsa has brought the dreams of Leeds fans, young and old, within the touching distance.

Obviously, the perfection to us Leeds fans would mean promotion as champions, but the season hasn’t gone perfectly with injuries, poor results and at one point what I thought was just pre-Christmas luck.

At times myself, plus probably all fans, have said during these times of poor performance; “I could do better than this!”

Bielsa has been brilliant and has been exactly what Leeds has needed these last 15 years, but knowing what I know, the signings, the tactics, the youngsters that have realized their potential and flourished, could we recreate Bielsa’s season so far?

It’s time to boot up Football Manager 2019 and find out.

Now some of you may know of Leeds’s varied and great history, but for those of you who don’t here's a brief summery.

Leeds were founded in 1919 and are celebrating their centenary on the 17th of October 2019.

The club is based in Leeds which is situated in West Yorkshire in the North of England.

The club colors are an all-white home kits, and usually a blue or yellow, or combination of both,  away kit.

The club had its best spell of success in the 1970’s under manager Don Revie, although now enduring a 26-year barren spell, having not won a competition since 1992.

I know what this team is capable of, I have watched this team all season and I’ve been amazed at what they’ve accomplished this season.

The main reason behind these accomplishments is the great sense of teamwork and cohesion they have when playing and Football Manager mirrors that to a T.

Pontus Jansson, Luke Ayling and Liam Cooper are leading this team on a charge through the Championship with Kemar Roofe and Pablo Hernandez the key to our triumphs, with Alioski, Klich and Kalvin Phillips there to back them up when needed. 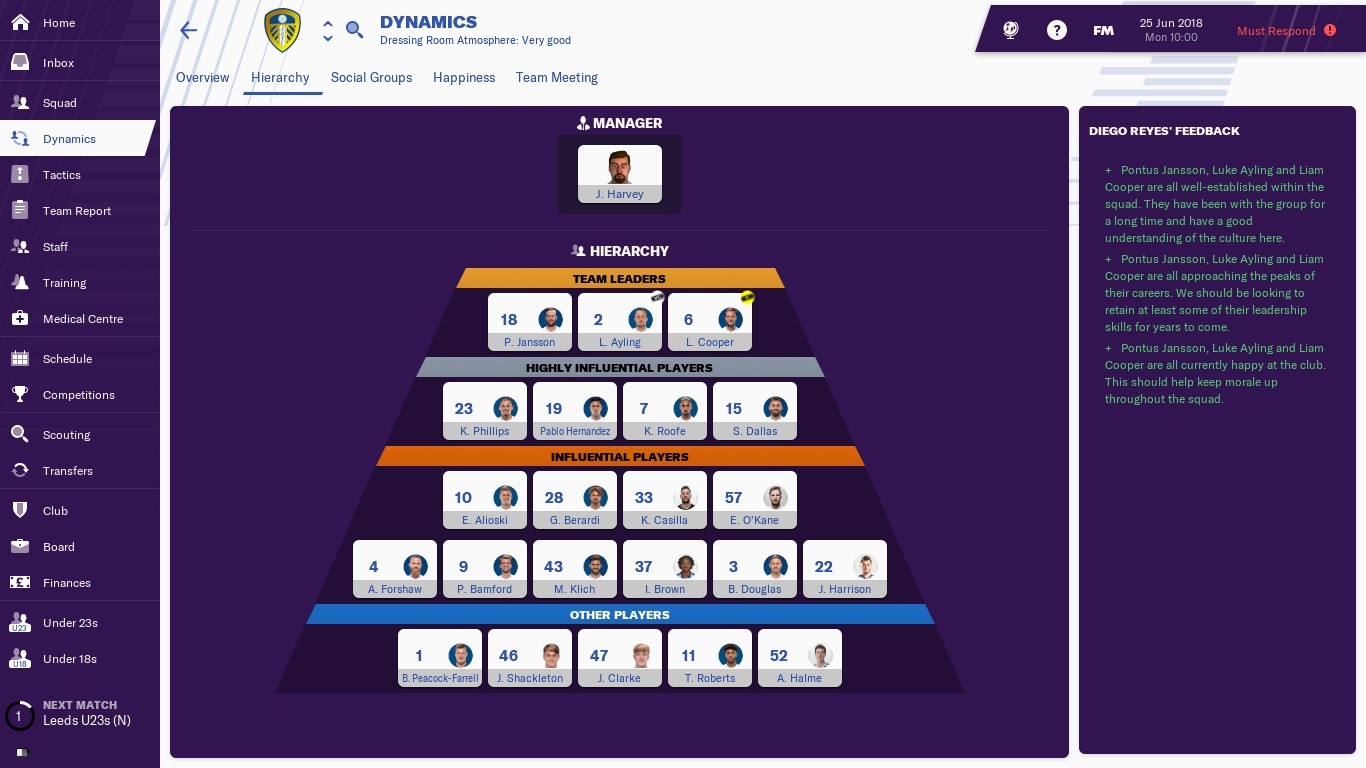 The main XI will mainly be unchanged for most of the games, but there is one thing hindering the squad at the moment, depth.

Outside the back 4 Leeds struggle with replacements and when injuries hit (Luke Ayling is currently injured and out for around a month with ankle ligament injury), you’ll have no-one to cover that RB area. The youth system here is excellent, but there’s no one available to jump straight into the first team at this level.

The board allow you a £2.5 million budget and you’ll have available £70,000 in the wage budget, so your scouting priorities are backup players across the back 4 with main focus on RB.

After consulting with Director of Football one player that stands out immediately is Andre Wisdom, a 25-year-old RB from Derby County, 3 stars current and 3 and ½ potential ability. Wisdom slots right in where you need him as a perfect backup.

My first offer to clubs would be Tyler Roberts, I see him as not breaking into the squad where I want him a striker with 2 and ½ current and 4-star potential 19 years old and already with £2 million there's more potential coming up behind him. I just can't see him breaking through the squad so better get rid of him and clear up the wage bill.

Checking through the squad I’ve noticed we have an injured Izzy Brown, just started a loan period and out for 4-5 months, very frustrating. Also, paying 100% of his £108,000 p/m wages, as well as a £110K playing fee, he’ll definitely be first one to go on the Christmas transfer period. I doubt he’ll break even into a rotated squad or even the bench, so deffo be sure to get rid of him. 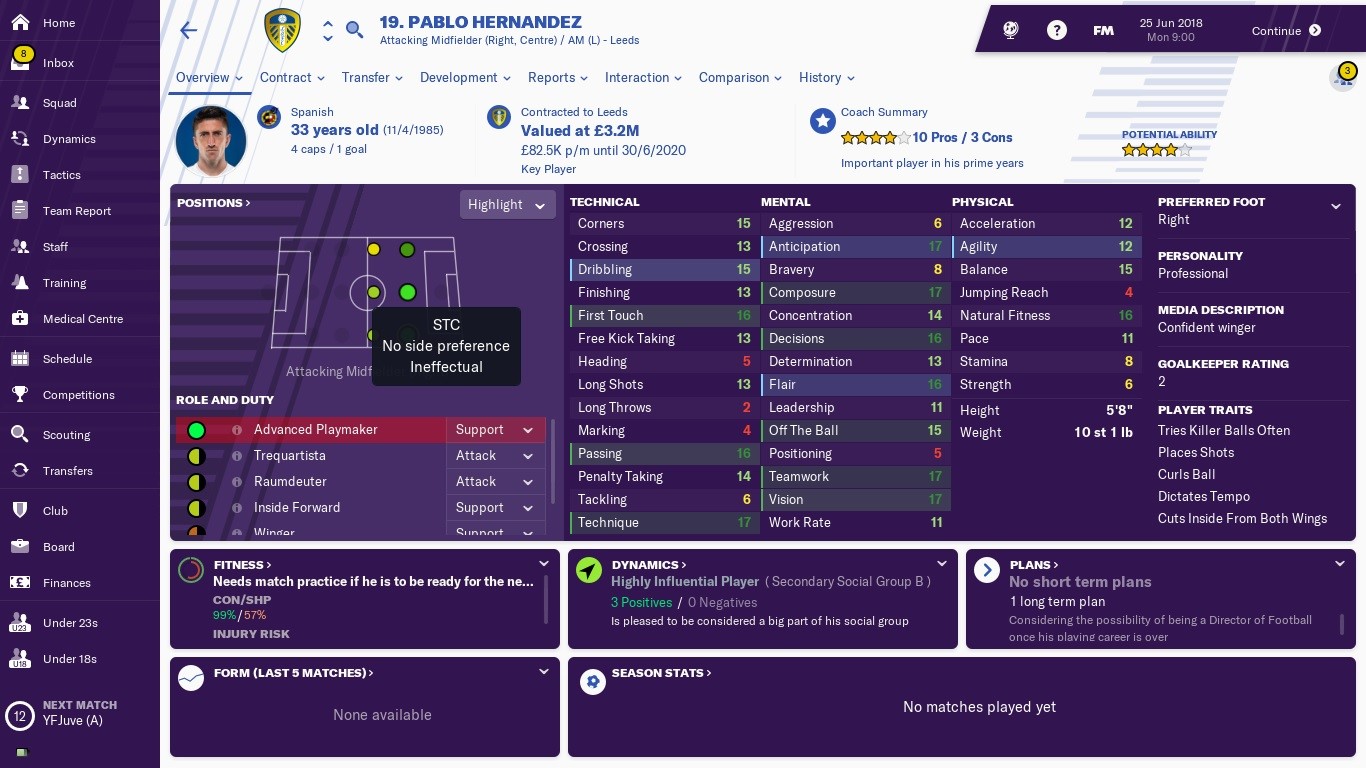 Pablo Hernandez has been key to Leeds’ success this season. 35 appearances with 12 goals and 12 assists this season he is definitely going to be your key player in this save, and hopefully his age (33) will put teams off him, and you get the chance to have him see his career out at Leeds and see how he fairs in the Premier League.

The One to Watch 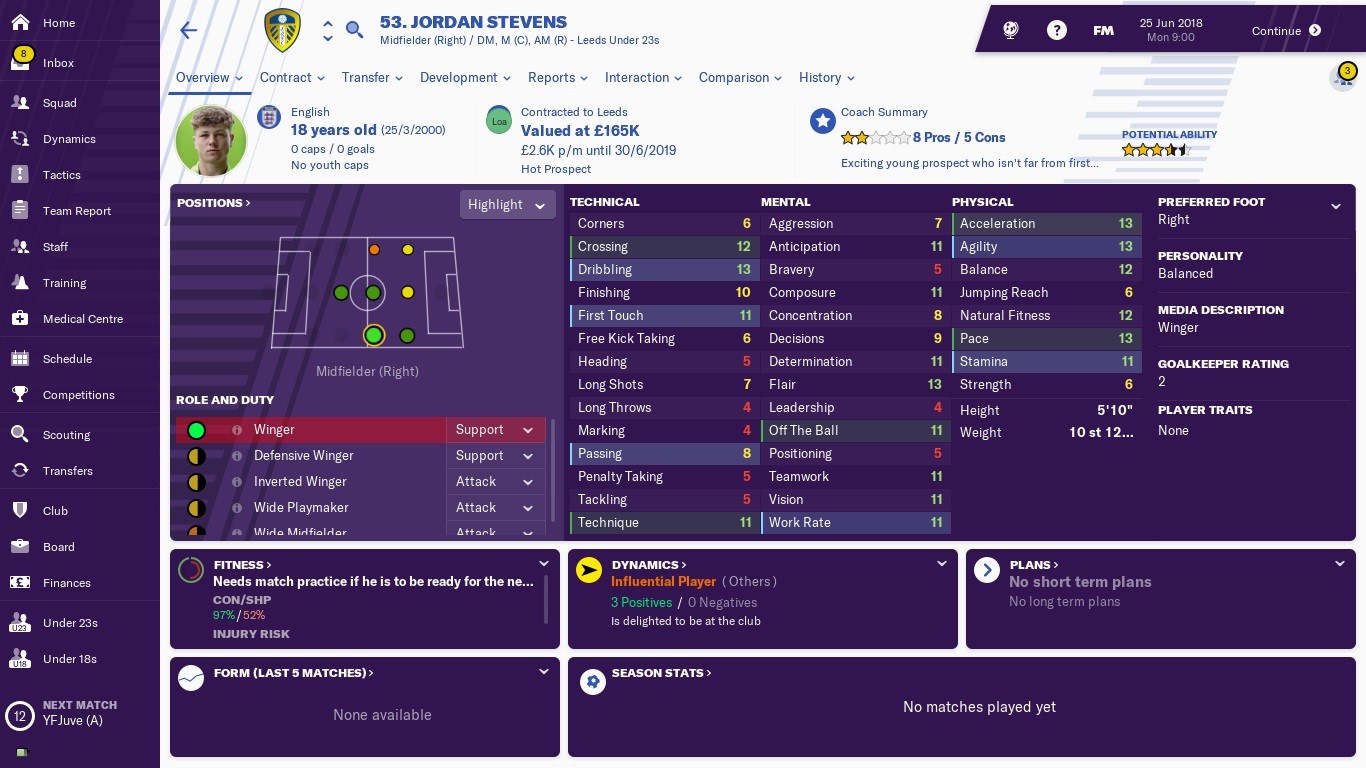 He’s 18, a natural right midfielder with 4 ½ star potential ability and 2-star current ability, Jordan Stevens is your wonderkid to keep a close eye on.

Hopefully he can realize his potential at Leeds before someone snaps him up or if they do, we have a nice 40-50% sell on fee. I started retraining him as an attacking right mid so hopefully he can take over from Hernandez when his retirement looms over the club. 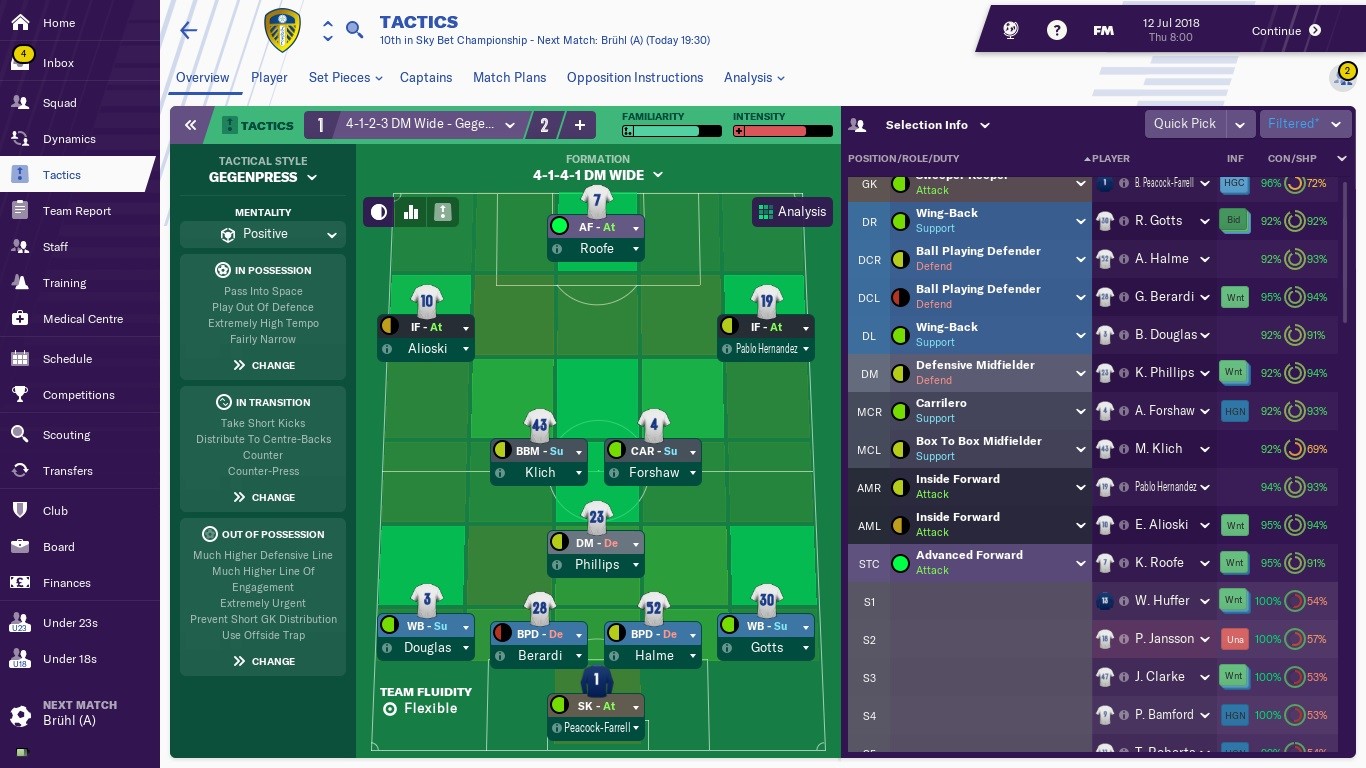 This tactic plays very much into real life Leeds tactic, with Roofe upfront supported by Hernandez on the wing and Phillips as a DM to provide extra cover in defence.

At the start we’re plagued with a few injury problems, so Luke Ayling and Pontus Jannson are not included in the current squad, but hopefully will be fit for the start of the season.

So, as we draw this to a close and work towards the start of the friendlies and ultimately the start of the season, the excitement grows, can we do better than Bielsa? Is the Gegenpress the way to go? The board are expecting playoffs and I hope we can exceed these expectations.

I wish everyone the best of luck when they take on Leeds and hope this FM19 team guide helps you recreate, if not better, Bielsa’s legacy.