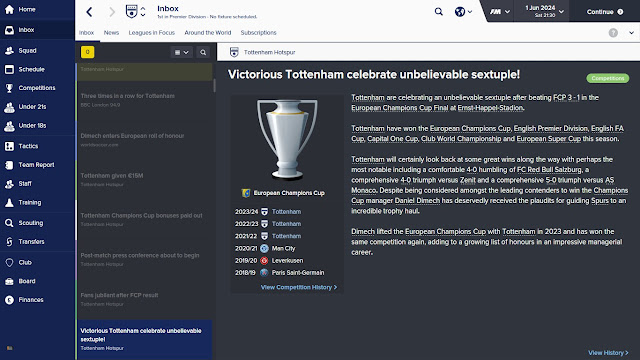 While in Football manager (and also in real life), most of the possession tactic used, need to be in a standard or lower mentality, I'm going to show you how to make a possession formation work both with a Control Mentality and a Standard. But before I do, just a quick reminder that you can get £50 with £10 first deposit Online.

Most of the tactics, use a lower tempo to look for some support and calm the game though I love to play a fast paced game, still with possession in our feet (or atleast it worked for me with both a small team and a big time - (Balzan Fc - Maltese Premier League , 1/2 star reputation .. & .. Tottenham - English Premier League). Whilst possession isn't everything in the game (there something in free slots real money as well), I can assure you that it is very important if you manage to balance all the areas of the squad, with most of the players having a passing rate of 15+. 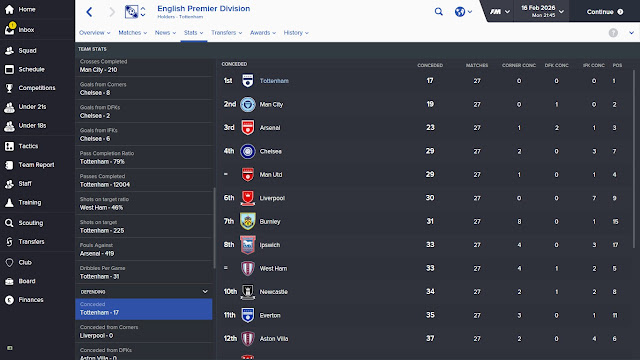 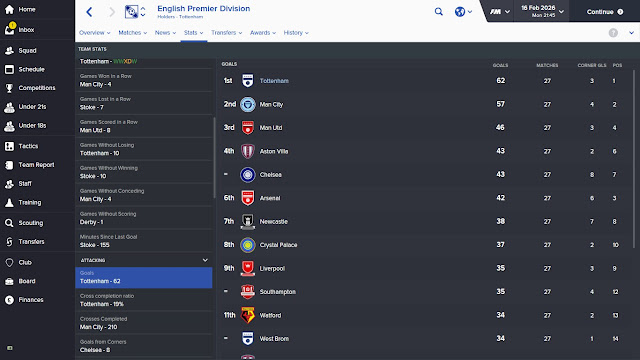 Here you can see, that in both the defence and both the attack we are on top of the premier league.

The formation itself uses all the areas of the squad, even though it shows that mostly the ball will be played through the middle. Most of the times the ball is turned round from one side to the other (if you don't set the touchline setting 'Exploit the Middle') and both the CAM and the Full-Backs will be used to attack with. The most important thing as mentioned above is to have players who have loads of teamwork and passing rate. 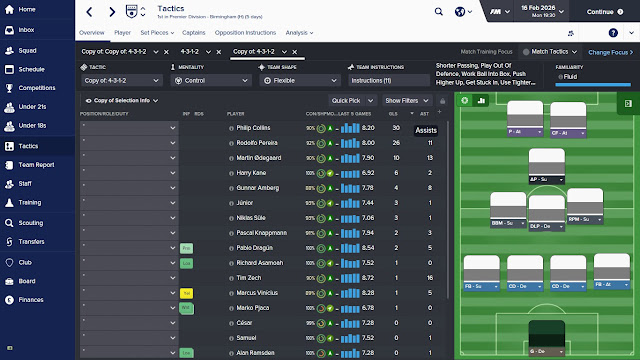 Only attacking with the Right Full Back from the defence, leaves you with 3 players mostly left at the back, although the left back will also cross and help during attacks.

NOTE : When playing with a smaller team (ie. like balzan) with whom I did pass trough to the europa league group stages with in the 2nd season, you have to play with an advanced forward instead of the complete forward, it is quite difficult to find a complete forward with that reputation. Also the RMP (in the centre of the park) could be changed to a Central Midfielder with a (support or attacking) mentality.

The settings for every player should be left as it is , apart from the Roaming Playmaker. The 'Shoot more Often' could be added , because this player moves forward during the attack. Also, helping would be a 15+ in long shots, and sprint, which helps the player and the team going forward. Other than that just the Goalkeeper, to pass the ball to the full backs every time he has the ball. The ball possession has to start from somewhere , and not by getting the ball forward in too much of a hurry. 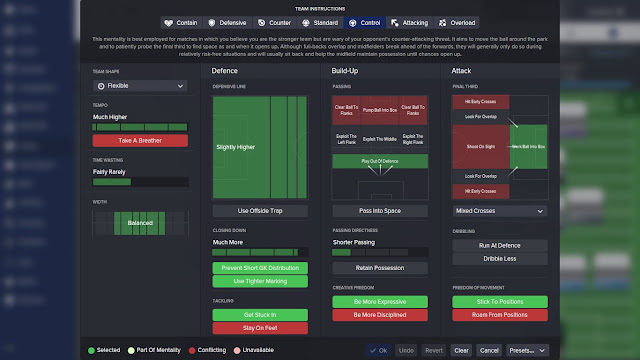 As you can see in the touchline settings, although this is a possession formation, the Tempo is Much Higher - the contrary of normal possession formations. The Closing Down should always be Much More, so that the opposition wouldn't have that much time to play the ball , till they get closed down. Play out of Defence obviously so the ball stays in your feet. Shorter Passing so that the passing would stay close as much as possible from one player to the other. Work ball into the box, so that it will turn around the team and working its way , with patience into the box. The players should always Stick to position, but let them Be More Expressive so the play can be enjoyed. Prevent short GK Distribution so that you will be pressing the opposition from their own half by also using Tighter Marking.

If you see that the defence is being quite difficult to break don't hesitate changing the width from Balanced to Wider, so that their defence will open a bit and you can attack easier. Also you can use as much as you like the Exploit the Middle, which still works with it, though checking the opponent's formation first will make it easier to choose between exploiting the middle or using both the middle and the wider positions. 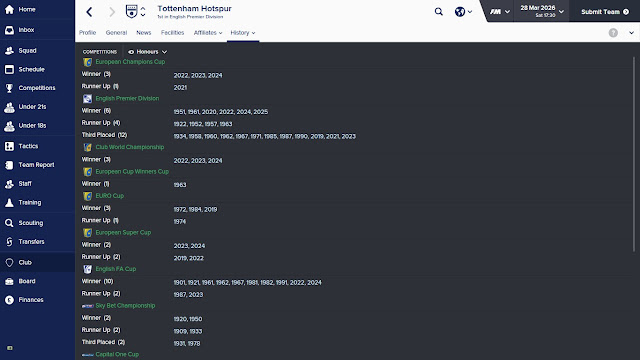 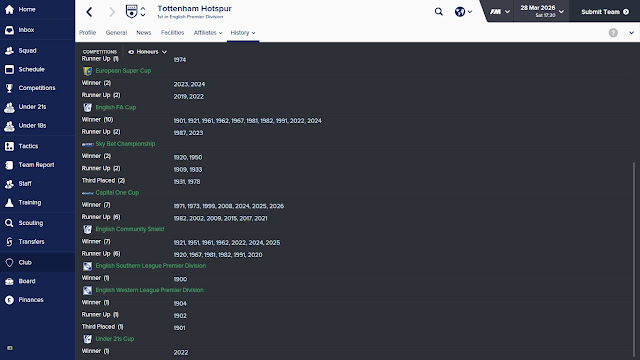 As shown above, we have won 20+ titles with this formation. As I said, it has worked both with Tottenham and Balzan , a really small team ( Screenshot can be seen below ) , give it a bit of patience , at least try starting with it during your pre-season ( Give them fitness , very high and match tactics - Then balanced, average and match tactics during the season) 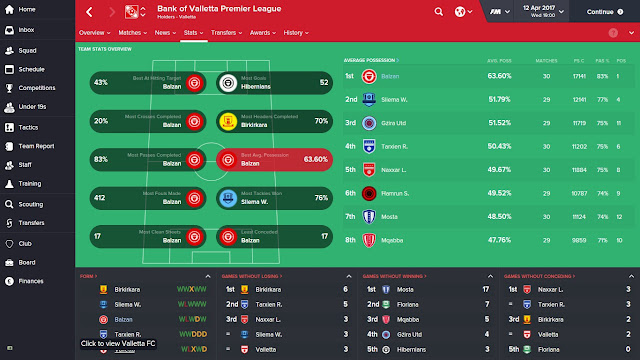 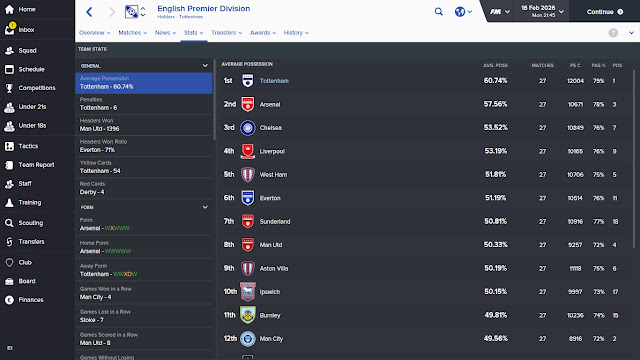 Do not forget to buy players , which have passing at least 15, due to high possession of gameplay. This tactic is mostly based on possession with 60% plus at the end of the season, both when playing with control and with standard mentalities.

You never have to play defensively with this tactic, unless you just want to defend, then just add 'Retain Possession' and just work the ball through the middle, that way if the players are fluid with the formation, they will rarely lose the ball. Hope everything works fine, and beat everyone that comes in your way.

BELOW YOU CAN FIND ATTACHED THE LINK TO DOWNLOAD THIS FORMATION WITH ALL THE TOUCHLINE SETTINGS DONE.


If tactics folder is not there, create one with this name only. Other names will not recognize the files inside the game.


If tactics folder is not there, create one with this name only. Other names will not recognize the files inside the game.

Once in your Football Manager 2016 save game: