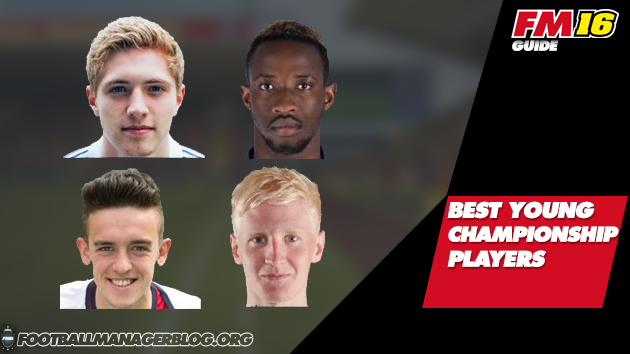 Let's take a look at who are the best young Championship players in FM 2016.

By now, most FM 2016 players will have deduced that Luke Shaw goes on to be a rather good left-back, and that Anthony Martial is alright at scoring goals.

Of course, to sign these players you’ll need a transfer budget as considerable as their potential ability.

Middling top-flight clubs will have to look elsewhere, and the Championship is not a bad place to start.

The Football League can provide a valuable education for a footballer in his formative years, Dele Alli being a shining example.

The players in this list might not slide straight into first-teams with European aspirations, but an offer to loan back the starlet to the selling club could sweeten the deal and serve all parties well.

Sure, they could all turn out to be David Bentleys in waiting, but there's only one way to find out. 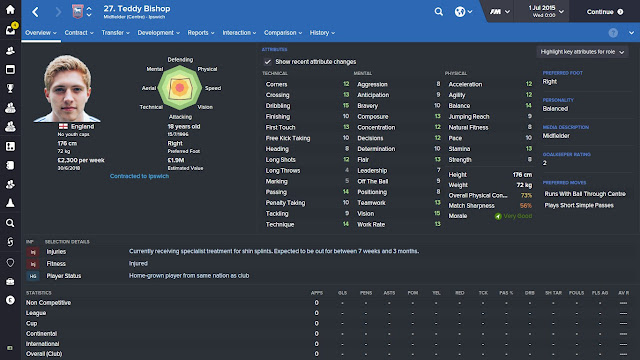 Teddy ‘The Bish’ Bishop has had a season at Ipswich Town plagued by injuries, but you can live in hope that his Football Manager counterpart recovers quicker from treatment for shin splints.

Predicted to be out for up to 3 months at the start of game, he’ll need to be nurtured back to fitness carefully. Once he’s there, you’ll have a technically-gifted central midfielder capable of dictating play with his passing and vision.

An impressive dribbler, he will rack up assists and chip in with a few goals from a playmaker role. Bish can be snaffled by offering his market value of £1.9 million and chucking in a couple of clauses; this is inarguable value for money. 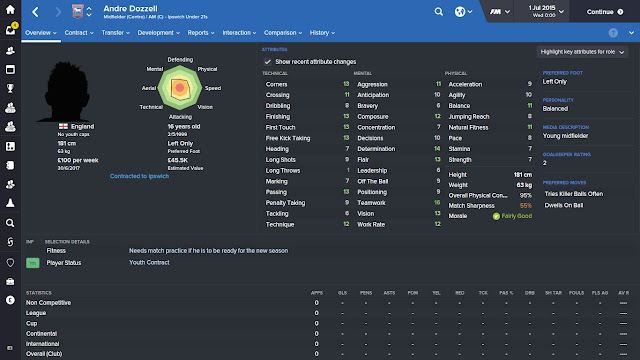 Ipswich boast one of the most exciting arrays of young prospects on Football Manager, and 16 year-old Dozzell is the pick of the bunch.

Having recently made a scoring impact on his first-team debut in real life, he’ll be able to fit into Championship sides much sooner on the game.

Like Bishop, Dozzell boasts an admirable passing range and a strong desire to work for the team. A weaker dribbler than Bish, he compensates it with impressive finishing skills. At such a tender age he will struggle with the physical requirements of high-tempo games, but he has the mentality and the skil-lset to make an impression at crucial times.

His compensation figure lies at £425k, a drop in the ocean for most Premier League clubs. 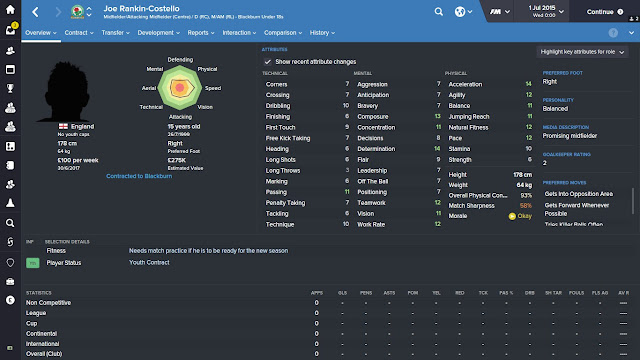 JRC is even younger than Dozzell; at 15, it is not unreasonable to suggest that he is one for the future, not one for the present. His versatility will make him worth the wait.

Naturally a centre-midfielder, JRC can also slot into defence and the wings.

James Milner, watch your back: there’s a new utility man in town. JRC’s preferred moves highlight his desire to get forward, with his dribbling and pace suggesting he will be better served higher up the pitch.

He is able to be picked up for a very reasonable compensation fee of £750k. 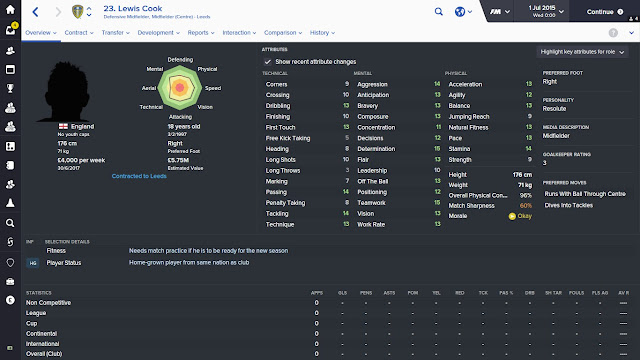 Perhaps the most obvious choice on the list as a result of his recent accolade of Young Player of the Season, Cook will go right to the very top.

The only uncertainty will be if you can snap him up first without bankrupting your club.

He is already valued at £5.75 million, which means that it will take around £10 million to satisfy Leeds.

Cook has the full package, and Championship experience under his belt. He can pass, he can tackle, he can run and his work ethic means that he will run. Maybe we don’t all hate Leeds scum. 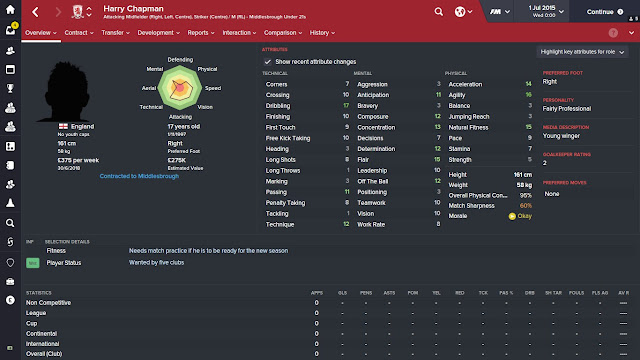 Next up is a player whose name I always read as Happy Chapman.

And you’ll certainly be a happy chap/chapette if you can snaffle Middlesbrough’s exciting attacker for around a couple of million pounds.

The embodiment of diminutive at 161cm tall, he is not the ideal candidate for teams set up to play hoofball. Pass the ball to his feet and let Chapman’s dribbling and flair cause chaos.

With competence at crossing and finishing, it will be his physicality that will be the question mark over his future. Get him in the gym, and you could well have a gem. 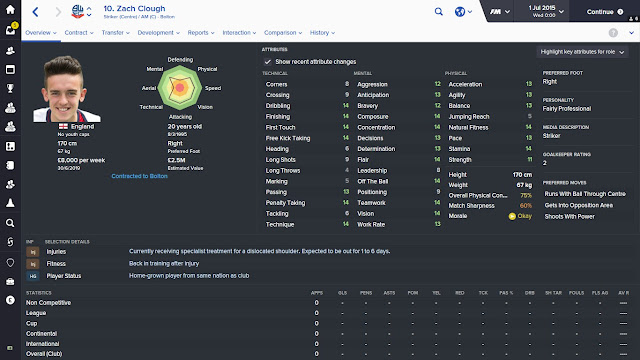 Poor Zach Clough. An exciting talent who surely couldn’t have foreseen just how rubbish Bolton would become, it will be interesting to see who he is snapped up by in real life.

You can save Clough from enduring such misery on Football Manager by capturing him instantly, although, having said that, Bolton do bizarrely well on all my games.

What Clough does well is dribbling and finishing, with remarkable mental attributes marking him out for a Premier League future. In fact, pay up £5-10 million and he’d be a useful backup striker already for most teams.

He’s weak at heading, so I wouldn’t endorse playing a front two of Chapman and Clough. But why would you? 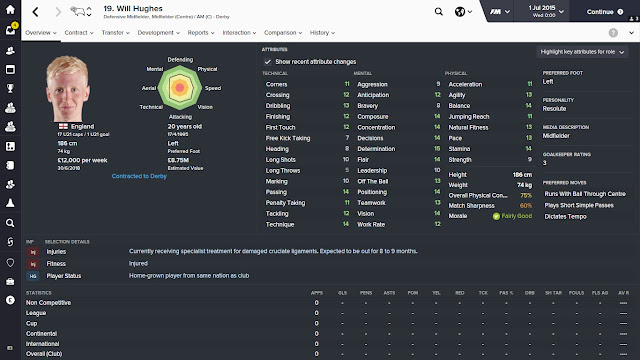 His long-term injury ensures that Cook and perhaps Bishop oust Hughes as the most desirable young English talents ready to step up from the Championship to the Premier League.

When Hughes returns from his nine month in-game setback, he’ll return as a propulsive central midfielder with no real weaknesses.

But he sure won’t be cheap, setting you back around £10 to £15 million potentially. If you're keen to build a team consisting of young British talent, then Hughes is perfect to be the star. 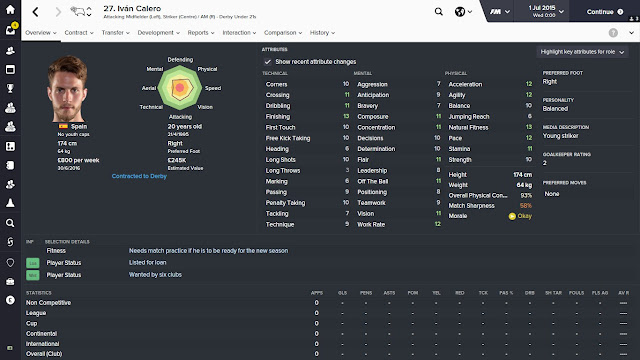 Financially, you might be better off having a peek at Hughes’ teammate. Calero operates in a wing position or a striking role, and admittedly isn’t much to write home about at the start of the game.

Because of this you might baulk at the £1 million price tag. This pacey natural finisher has sufficient weakness in his all-round game to make him League 2 quality, but give him time to blossom and you’ll have a composed attacker capable of moments of magic. 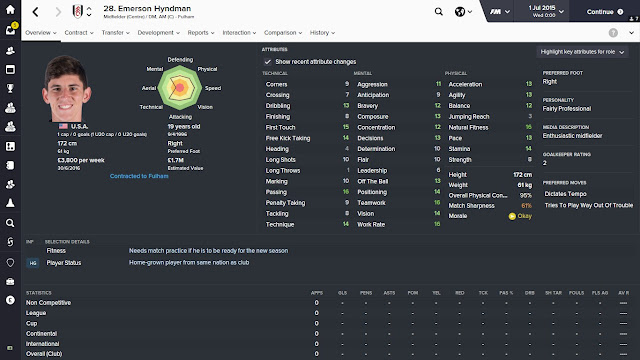 Fulham’s American starlet joins the ranks of central midfielders already in this list.

The U.S.A international already boasts a fantastic passing range in addition to a strong first touch and a remarkable ethos.

Whilst not a physical presence, the man dubbed as the next Ricardo Clark compensates for this with bundles of energy and technical ability.

Fulham will take considerable persuading to part with this guy; just look at those attributes! 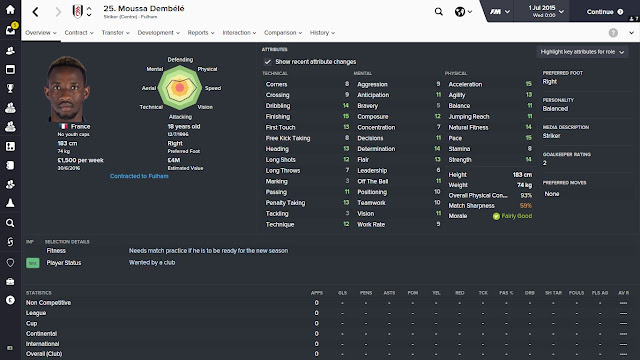 With these two Fulham talents as well as the irrepressible Ross McCormack, you can expect the Londoners to get far closer to the top on Football Manager than they have managed this season.

Dembele’s preferred role is as a Complete Forward, and his deadly finishing and pace backs this up.

Moussa could cost around £7 million, which in the modern game is not a shocking sum.

His mental attributes are slightly poorer than some of the others in this list, but there is a top-class player to be coaxed out of this raw talent.