Beating Jock Stein #1 - How to win on Football Manager (Hopefully) 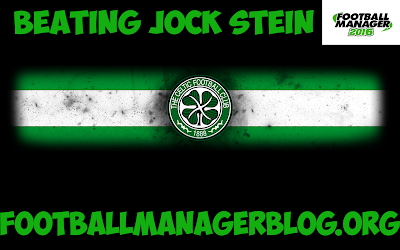 Jock Stein is probably the most famous Celtic manager around. He won a Champions League with them, back when it was called the European Cup, 10 league titles and 14 domestic cups. My name is John Dwerryhouse, and my aim is to become the greatest manager of all time, starting by overtaking the almighty Jock.

To achieve this goal, I've joined Celtic as manager. Looking at the squad, it seems decent enough to win the league, but to compete in Europe??? Nope. So I'm going to adopt the age old philosophy used by managers everywhere who want to win at all costs. Buy the well known prospects, hunt down great regens, sell for huge profits, and reinvest. This is the well known guide to winning in Football Manager. Eventually, I hope this story will serve as a guideline to future managers, who will read these words and take the wisdom from them. 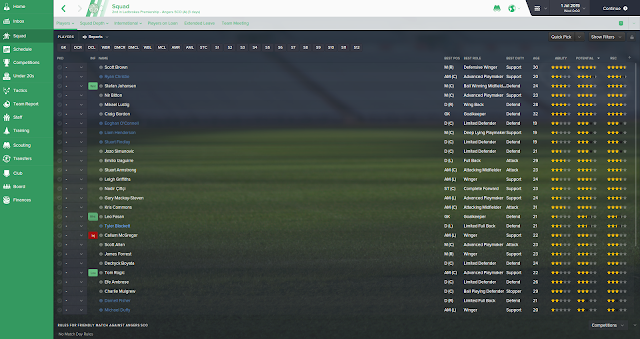 In my first team meeting with the squad, I lay out my dream of winning the Champions League. "Some of you in this room will be with me when we lift that gloriously heavy trophy. Some of you will not. Those of you who get left by the wayside, know that you have played your part!"

This rousing speech doesn't seem to go down too well. Players are starting to worry about their places, and for good reason. Normally I avoid using tips and lists on Football Manager, but here at Celtic Park, I am going for it 100%, using any possible help, short of magically providing Celtic with unlimited wins, or mysterious cash injections.

Using my vast new scouting knowledge gleaned from the wonders of the World Wide Web, I get to work. Despite being the biggest team in Scotland, Celtic have only given me 2.2m to spend. So I'll have to be a little frugal for the first few years.

So I delve into the list of free transfers and upcoming contract expiry targets. Colombian Jhon Arango is available on a end of contract deal, but chooses to stay in Colombia. In response, Chief Scout John Park is given 35 DVD's of Alessandro Del Piero in his final year in Australia and asked to get a scout report together.

Porto U19 striker Rui Pedro is another name tipped for big things, although I've seen nothing of him yet. I pick him up on loan, but am planning to offer him a full time deal in 6 months.

Highly rated prospect Andrija Zivkovic agrees a deal, only to be scuppered by his agent demanding 8.5m for his half of Mr. Zivkovic. I'll wait and hope I can get him in January cheaper.

Barcelona prospect Alex Grimaldo, who has done so well for me on previous FM adventures, comes in on loan, hopefully he'll sign permanently in January. 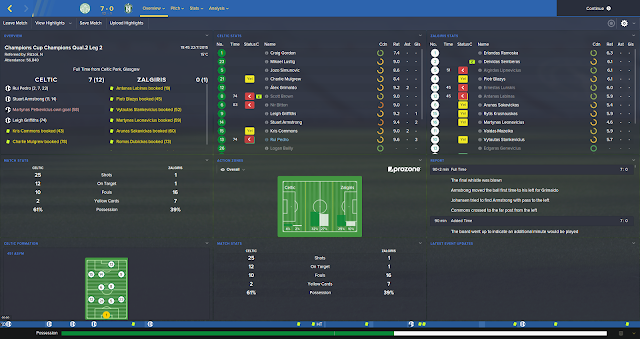 New signings Rui Pedro and Alex Grimaldo contribute enormously, Pedro getting a hat trick. I attend the third round draw, where we draw Swedish champions Malmo. It's a tricky game, but I think we could potentially get into the hallowed land of Champions League group action!

We get a huge boost when famous wonderkid Kristoffer Ajer turns down deals from big clubs like Juventus and Roma to come and play first team football for us at Celtic. 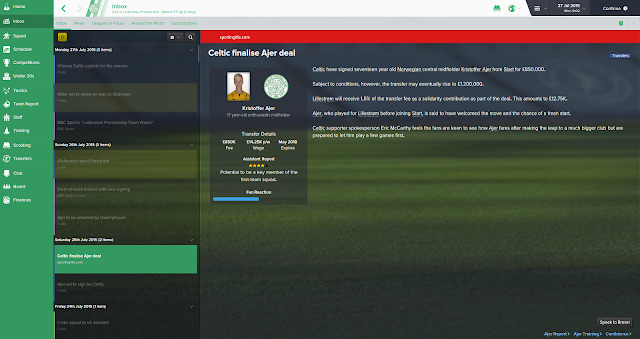 Ajer goes straight into the starting lineup for the all important Malmo match. We travel to Sweden via coach, and get in trouble when Leigh Griffiths tries sneaking on a collective of teenage Swedish blondes. We drop them off at their community college, and head to the stadium.

A dull first half results in Leigh Griffiths being replaced by Nadir Ciftci on the right wing. Ciftci plays a part in the build up to yet another Rui Pedro goal, giving us a vital away goal in the 62nd minute. With seconds to go, the two combine again inside the Malmo penalty area to get Rui Pedro's second goal, and his 6th in Europe so far. Malmo collapse and Ciftci gets his own reward from a Anthony Stokes cross. We leave with a 3-0 win.

This gives my squad a huge confidence boost ahead of our first Premiership match against Ross County. We get another 3-0 win with goals from the attacking midfield trio of Commons, Armstrong and Griffiths. 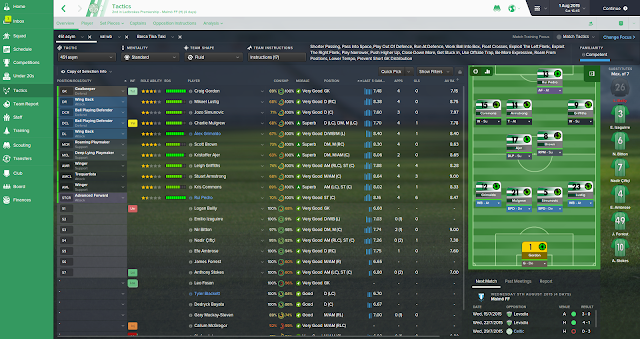 My three new signings are all averaging over 8.40 so far. Ajer and Rui Pedro play against Malmo in the return match, and lead my second string side, limiting Malmo to 1 goal. 3-1 on aggregate sees us through to the Champions League playoffs. Not having experienced management in Scotland before, I'd thought that this win was enough to guarantee qualification. So I wasted a bottle of champagne spraying it all over the bemused squad before realising we had another match to play.

News comes through that we've drawn Bulgarian side Ludogrets in what I can only hope is the last qualifying playoff match, otherwise I shall lose my temper.

In our next league match, Partick Thistle give away a penalty and get a man sent off in the first minute. Leigh Griffiths steps up and gives us the perfect start. Despite Gary Mackay-Steven scoring an own goal, we go in 4-1 up at half time, Kristoffer Ajer scoring and assisting. Stuart Armstrong completes his hat trick in the second half, giving us a 5-1 win.

We drop 2 points against Kilmarnock thanks to a late penalty, but sneak past Inverness 1-0. The away game at Ludogrets ends 3-1, my midfield getting the goals again. Kris Commons, Nadir Ciftci and Nir Bitton scoring to give us a great chance of finally qualifying.

We stay unbeaten in the league after whipping Dundee Utd so hard they used their safe word. Rui Pedro gets 2 goals in the 5-0 win.

I finally get to spray champagne properly in the second leg against Ludogrerts when we go 6-1 up on aggregate. I accidentally get some in Efe Ambrose's eyes and he storms off after not playing a single minute of our European adventure so far.

Getting into the Champions League proper gives us £8.57m plus approximately £1m per win from now on. This money will be vital in improving the team in January, so clearly the Champions League is our priority.Qualifying from this group will take some doing though. Benfica, Manchester Utd and Dynamo Kyiv make up Group D. 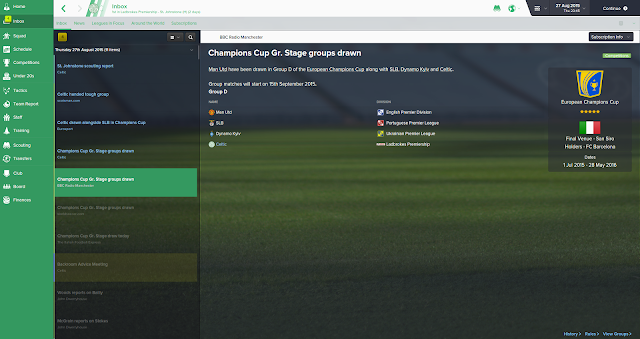 Unsurprisingly, I get Scottish Manager of the Month. Kristoffer Ajer is Young Player of the Month, already justifying his signing. As he's not old enough to drink, I shake a can of Pepsi and he gets to throw that around while I drink yet more champagne. If the success keeps coming, I'll be playing most of this season drunk...

The transfer window doesn't offer me any more good opportunities that I can see, so I sit tight with the squad I have.

Keep an eye out for my next update, here on Football Manager Blog!