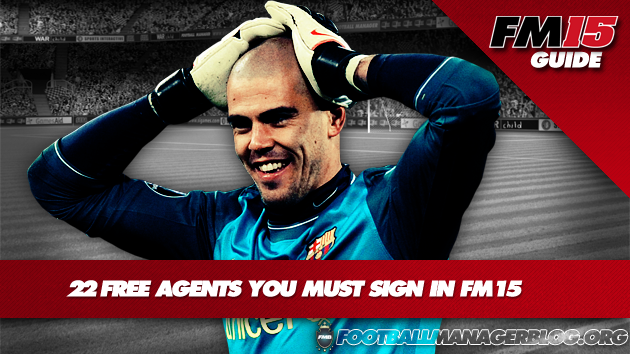 Free agents, or players that can be signed on a free transfer are you best option to strengthen your squad without any extra money spent from your transfer budget in Football Manager 2015.

We took the liberty to explore and find out who are the best free players that you can sign in Football Manager 2015. This list of 22 players will come in handy if you're looking for a replacement, backup or even a key player for your team.

Also, you'll see that there are two players for each position respectively, two goalkeepers, two central defenders etc., so if you fail to sign our first option - move to the second one. Also, we included their EU status and international caps, so you can figure out how likely is for a player to get his work permit.

These free agents are by default free to sign at the start of the game.

Well know name in football world, Victor Valdes is the best option if you are missing a goalkeeper. Only downside would be his wages and the fact that he is injured 4 to 5 months with damaged cruciate ligaments. He has some years left to play on a top level, so signing him for your FM15 team is a must!

Yet another solid free agent on our list is this Polish goalkeeper, Tomasz Kuszczak. He made his career playing in EPL for clubs such as West Bromwich and Manchester United. He should be opened for most transfer deals, meaning if you're managing a low rep team he might just want to sign for you.

Former Uruguayan captain that made his career playing for the Turkish side Fenerbahce for 6 seasons is probably the best free defender centre in Football Manager 2015. Even thou he is not as young as we would like, he can still be a useful substitute or even a first team player at a mid reputation club.

Even thou Jurica hasn't got some great attributes, at the age of 27 he can be a valuable backup or a rotation option for mid rep club. On the good side, his asking wages are not going to be as high, so you could sign him for a really cheap price. 15 clubs are interested in signing this Croat at the beginning of the game.

Slovakian left full back is a great option if you're missing one at the back, or you just need a cover for your first team player for a season or two. Average attributes, good for lower league clubs. Has a low wage demand when trying to sign him.

Slightly better option for a left full back is none other than Reto Ziegler. Three years younger than Marek Cech, Ziegler could find himself as a starter for a mid rep team and an irreplaceable for a lower league club. Played for clubs such as Tottenham, Sampdoria, HSV, Juventus etc.

Former French international, Anthony Reveillere is your best option if you're looking for a quality experienced right full back. He made his name playing for Olympique Lyon in the French Ligue 1. Downside are his fairly high wage demands and his age. Good for a season, two tops!

Moroccan international is the best free option if you're in a need for a right full back. Chretien has also a French nationality, so there should be no problem obtaining a work permit. He could be a first team player for a mid rep clubs, and his wage demands are fairly reasonable.

Gaby, who earned his bread in Italy's Serie A playing for the likes of Lazio, Bologna and Inter, is in our opinion your best choice if you're looking for a solid defensive midfielder. Even thou in a later stage of his career, his physical attributes are still looking good, as well as his technical and mental ones.

Cameroonian that also possesses French passport is our second best pick if you're in a need of a solid defensive midfielder. At the peak of his career, Landry can be a good first team player for a mid rep club, and his wage demands aren't that high.

Our best option in the midfield department is this former Chilean international. Still fairly young, Felipe is a great signing for mid to high rep teams in Football Manager 2015. Even more impressive is that he can develop even more if given some play time. No worries about the work permit, as he also holds Italian passport.

Player with an impressive footballing career history, who managed to grab no less than 75 caps for his international squad and played for the likes of; PSG, Roma, Sporting, Inter and Roma. Houssine is our second pick for the best free midfield centre position. Low wage demands and more than experienced player at your disposal.

Full named Simao Pedro Fonseca Sabrosa, is a well known name in football world. Having played for the likes of; Sporting, Barcelona, Benfica and Atletico Madrid, this player has experience in abundance. Even thou in a late stage of his career, Simao can still be a very useful player for any team in FM15. Great solution if you're struggling to find a backup for your left winger.

This young Spanish player is our second choice at the left winger position. He would operate best as an attacking winger left, and has fairly good attributes for playing in this position, such as; Dribbling, Passing, Technique, Flair, Off The Ball, Acceleration and Pace. This player could easily turn out be a great acquisition for the future.

Yet another well known name for the fans of EPL, El-Hadji Diouf. Diouf has loads of experience of playing at the top level, and at the age of 33 you can still squeeze some goals and assists from the former Senegal international. Good acquisition for mid rep clubs, best played as right winger.

Our second pick for the right winger position is the former Man United player, Chris Eagles. Even thou he never managed to break in the first team, Chris has some quality at his disposal. Key player for lower league clubs, and an important one for mid rep clubs.

Player that came from La Masia, Barcelona's school of football for young talents, but never played for Barca. Also had a brief spells at EPL side Arsenal, and another great Spanish club, Atletico Madrid. Having 24 years and solid attributes, Merida might just be the classic no. 10 you were searching for.

Ideal signing for mid reputation clubs in Football Manager 2015. Poitr will be your key player for sure, as he posses great Technical attributes that make him ideal Advanced Playmaker for your team. Legend at Hamburger SV, also played for FC Bayern Munchen and Spanish side Sevilla.

Our personal favourite out of this bunch of free agents in FM15. Denis is an ideal target man and will cost you nothing! Key player for mid reputation clubs, and a great backup for high reputation clubs. He also possesses Italian passport, so getting a work permit might not be big issue, after few appeals off course.

Giant from Austria, with his 202cm in height and 94kg in weight, make Stefan an ideal Target Man for most of the teams in Football Manager 2015. Exceptional Work Rate and Determination, with solid Finishing, make this striker a must sign for your team in FM15.