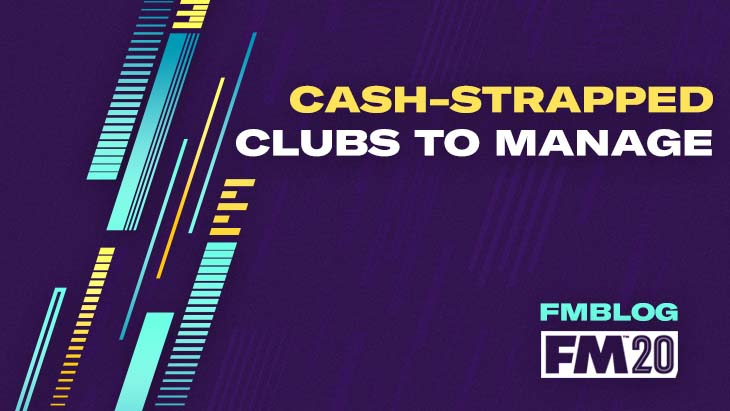 Some Football Manager 2020 players want a harder challenge for their save. Instead of opting for a wealthy club with a rich oil-tycoon owner, some want to take over a club that’s blessed with less resources, steady the ship, be clever and prudent in their decision-making, and attempt to take them to success against the odds

You’ll need to be savvy in your transfer business and contract negotiations. You might need to exploit the loan market, transfer listed players and free agents. You might need to place a lot of trust in your youth academy and nurture your younger players, to either become a mainstay in your side or sell on for a profit.

Your managerial abilities will be tested, but steadying the ship, watching your finances improve and giving your often long-suffering supporters some well-deserved success will make it all the sweeter.

Here, we give you a breakdown of the cash-strapped clubs that present the biggest challenges in the upcoming Football Manager 2020. If you can make a success of one of these, it might be your most satisfying journey yet.

Big Sam’s memorable Bolton side of the early-to-mid 2000s feels like a world away now, with Bolton languishing at the bottom of Sky Bet League One, beginning the season on -12 points as a result of their entering administration. They even failed to fulfil their final match of the 2018-19 season against Brentford, didn’t pay their players for over 20 weeks and only narrowly escaped collapse in the summer.


But Bolton will be a popular choice for many FM players once the new edition is released.

It took till mid-September for Bolton to pull together something that resembled a squad of players, and now they are having to place their trust in a number of youth prospects, arguably before they are ready. You’ll most likely rely heavily on centre back Jake Wright and Daryl Murphy, two of the more experienced players, but this challenge will test your managerial ability to its limits. Can you steer a squad of inexperienced youngsters to survival, with the view of pushing Bolton back up to the Premier League in the coming years?

Many football and FM fans will recognise Brescia for two reasons: Mario Balotelli and Sandro Tonali. Le Rondinelle defied the odds last season to win promotion to Serie A with a tight budget, and are faced with an even bigger challenge this year: to survive in Serie A with the lowest budget in the league.


One of your first decisions will be whether you stand your ground and reject inevitable bids for Tonali with the view of him becoming your playmaker for years to come, or cash in for a sizeable fee that you can then re-invest in the rest of your playing squad. Rômulo offers genuine quality on the flank, and Alfredo Donnarumma (brother of Gianluigi Donnarumma ) will be expected to contribute goals, along with Balotelli.

Like Bolton, survival is the most Brescia fans will be hoping for this season – can you defy expectations?

Caley Thistle became a mainstay in the Scottish Premiership in the 21st century, even winning the Scottish Cup in 2016. However, their relegation in 2017, and subsequent failure to return to the top flight, has left them stagnating in the Scottish Championship, and their supporters bewildered.

They have posted major losses over the last few years and find themselves in a financially precarious position, with many tipping them as the next Scottish club to enter administration.


Long term, you might aim to become the first team outside the Old Firm to be crowned Scottish champions since 1985. Short term, however, Jags fans expect a sharp return to the Premiership, whilst simultaneously balancing the books.

A few faces from the Premiership days, such as Aaron Doran, and Carl Tremarco still remain at the Caledonian Stadium, joined by experienced Premiership players in Miles Storey and James Keatings. Will you be able to get the best out of an underachieving set of players, or clear them out for new blood?
[post_ads_2]

Another club to have suffered something of a fall from grace in recent years, including a relegation to the third tier of Spanish football in 2015. However, a recent resurgence, epitomised by back-to-back promotions in 2017-18 and 2018-19, see Mallorca face off against Spanish football’s elite this season, but perhaps on something of an uneven playing field.

They made an abundance of signings in the summer either on free transfers, loan deals or for small fees. No transfer fee exceeded £2 million, and so the majority of signings were relatively unknown, but they did manage to bring in Chelsea full-back Baba Rahman and Real Madrid wonderkid Takefusa Kubo on loan deals.


Can you mould this collection of players into an outfit capable of surviving in La Liga, and eventually take on the financial powerhouses of Spanish football in the likes of Barcelona, Real Madrid and Atletico? If you can, your managerial prowess cannot be questioned.

Dijon have developed a reputation as the typical yo-yo team in France. Between 2011 and present day, they have bounced between Ligue 1 and Ligue 2, and only avoided another return to the second tier last season due to victory in a relegation play-off.

They have always struggled to compete with rivals in France due to their comparatively small budget, and this season looks no different, with Dijon rooted firmly to the bottom of the Ligue 1 table.


Alfred Gomis is a highly rated Ligue 1 keeper, and they’ve added former English Premier League players Didier Ndong and Bruno Ecuele Manga to their books. Could you be the one to finally steer Dijon away from treading water year on year, and drag them up Ligue 1 with limited finances?

Birmingham fans have had a torrid time of it in recent years. Their failure to fully recover since their relegation to the Premier League in 2011 was confounded by their financial worries last season. They have invested heavily in the last few years, gambling the club’s future in an attempt to return to the Premier League. This culminated in them posting significant losses last season, being placed under a transfer embargo due to breach of financial fair play rules, and docked 9 points for their misbehaviour.

Despite their desperation to build a team capable of promotion, the club have finished in 19th, 19th, and 17th position respectively in the last three seasons. Consequently, the purse strings at Birmingham City have been tightened, and a number of their best players have been sold.


Supporters have high hopes for defensive midfielder Ivan Šunjić and genuine wonderkid Jude Bellingham – but apart from that things look a little bleak – can you finally be the one to take the Blues back to the Premier League?