The Story of my Addiction from CM to FM16 (Part 1) 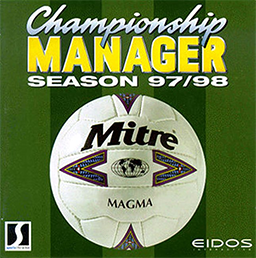 I had recently joined a new college in Solihull and my love of football was beginning to ignite.  Birmingham City my biggest local team (we don’t speak about the other nearby team in a small village called Aston?!) had just finished first, in Division 2.

This resulted in promotion to Division 1 (now the English Championship).  The other lads in my classes at College were talking about football computer games all of the time, most of them referring to a game called Champ Man or something…

Typically, like any other school in the UK (and around the world), our lunch times were filled with actual games of football.  Being absolutely rubbish at playing football, I didn’t care if I was picked last, I was grateful just to get a game, even if it was in goals…. Again?!

It seemed that everybody around me was talking about football, playing football, watching football and murmuring about Champ Man.

As a self-conscious teenager, I didn’t want to be the uncool kid who didn’t know about the latest trend, so before Champ Man was mentioned, I nodded smiled, hummed hawed and anything other than appearing less than cool.

During the various pieces of conversation, I had overheard, I gathered that Champ Man was a game, a football management game and one that let the imagination run wild.  One of the lads even mentioned managing Blackpool and signing Alan Shearer.  Wow!

Then it happened, the epiphany, the moment in life where one small event changes the entire course of the next 20 years...  Where and when did it happen, who witnessed this incredible moment that would change my life forever?

I was alone, as I walked into HMV in Birmingham City Centre, listening to Coolio rapping about his Gangsta’s Paradise as I climbed the stairs to the middle floor.  The location of the computer game displays with all their bright colours and enticing graphical depictions.

I perused the titles on display, my gaming focus was firmly on the Sony PlayStation for which, I had been saving for all year.  My funds were limited to mainly window shopping though, as most games were around the £40 price point and nothing had been out long enough to have been properly reduced.

After gazing at all of the new triple A titles, Destruction Derby being one I vividly remember, I was about to walk out empty handed.  Then as I walked past the PC section, one lowly stand, I saw it.  A big green box with the words Championship Manager 2 written upon it.  Next to the title was a black sticker highlighting its price £9.99!.

As I took it from the stand, several thoughts raced through my mind.  Is this the one, the one game everyone at college had been talking about?  Will it run on my 486 dx 2/66 PC?   As I turned the box round to look at the graphics (usual practice when game hunting), where are all the graphics and pictures of footballers?

I read the specs and it seemed like it would run on my 486, easily and at £9.99 the money in my wallet would cover it easily.  I clutched the box and I walked to the till, sporting a massive Cheshire Cat grin.  I paid the assistant, mainly using one pound coins and fifty pence’s and tucked my purchase under my arm.

This was the very moment, unknowingly to me at the time, which would shape my spare time for the next 20 years.

Championship Manager was in my life!

I hoped onto the 97 bus to take me home and paid my 30 pence child fayre.  As the bus travelled through the inner city streets, I slowly opened the box and found the smallish manual.  I pored over the manual and read it twice over by the time my bus arrived on my street.  I hurriedly placed everything back into the big box and walked from the bus stop to my house, carrying the box like some sort of precious treasure.

When I got into the house I excitedly showed my parents my purchase. Their reactions were nondescript, in fact I think mum gave me another lecture about how much money I would save if I didn’t spend all of my money on computer games.  This one is different mum, all of the kids at school are talking about it.  “Yeah whatever until next week” were her words.  Over twenty years have passed and we’re still talking about it.

Now the house my parents have lived in for 40 years is separated into two public rooms, with a kitchen downstairs and three bedrooms upstairs, a typical 1970’s Birmingham inner city house.   The dining room was literally a second living room, where my dad would sit and watch sport on ‘his’ telly and my mum watching constant soaps (Corrie, Eastenders, Neighbours, Home and Away, Brookside to name but a few) on ‘her’ telly, in the other room.

Due to having a limited bedroom, my computer was located in the dining room, which I shared on a constant basis with my Dad.  The reason for me highlighting this trivial fact will some become apparent.

I sat down with a mug of tea in the dining room, in front of my beige Packard bell PC and typed the words D:\cm2install.exe.  The computer sprang into life.  It seemed, somehow, to install the game with as much excitement as I had to play it.

There it was glaring at me not really inviting me to play with its block menu system and pixelated background picture. Start Game, ‘click’ English Game ‘click’. Now for one of the biggest questions all players of Championship Manager face.  Which team do I select?

Now the criteria for selecting your team can range from letting your heart rule, opting for your favourite team or to being materialistic and choosing the team with the deepest pockets.

My first ‘go’ at the game I chose Birmingham City obviously.  The squad was massive due to a splurge by our current manager Barry Fry, it included club legends such as Ian Bennett (GK) and Paul Tait (MC) with some players that would become infamous amongst the ranks of supports, Ricky Otto (Still unknown!).

Although the first few games are a little blurred I remember not doing terribly well and being frustrated.  I couldn’t seem to replicate the glory, bragged about by my mates and I certainly couldn’t sign Alan Shearer.

I couldn’t bear to walk away, the next game always seemed to be an important one.  Okay I will go to bed after this FA Cup 3rd round tie at Leeds, what….I’ve just beaten Leeds.  I better stay up for the 4th round draw, game, who cared.

My Dad would constantly moan about the tapping noise the keyboard space bar would make during games and between screens (I still use the space bar method). I perfected the silent tap, slowly pressing down and keeping slight pressure on but letting it rise enough so not to make a noise (I wished somebody would hurry up and invent rubber keyboards!).

With the match being reported by one line of text, surrounded by a coloured border, my imagination was running wild.  Trying to visualise the play like watching match of the day late at night.

Eventually I gave up trying to succeed with Birmingham. I like a challenge but sometimes it was just too much of a challenge.

I shifted onto the big money teams, which at the time were limited mainly to Arsenal and Man U.  I always chose Man U for some reason and always tried to sign the best of British talent.  Keith Gillespie was a player I remember tearing down the wing at Newcastle.  For years (probably only months) I would try to sign Keith in all of my teams, trying to replicate the amazing runs he would pull off in real life.  It never did quite work like that.

I was addicted, I couldn’t go more than two days without my Champ Man fix. It was like a drug, a drug that gave me proper excited highs but one that also gave me lows.  I felt the stress of being an actual manager.  The burden of financial management, dressing room harmony, the feeling of needing to succeed.  How did this simple football management game send me on an emotional roller coaster.

As many before me I will lay down the key points of my addiction and invite you to join me on the journey.

Im interested to hear about your addiction to football manager (Champ Man) or even just your last save of FM16, that you cannot walk away from.

I will be tweeting about the odd game using #justonemoregame please join me.

BACKROOM STAFF,39,BARGAINS,13,BEST PLAYERS,53,CAREER STORY,56,CHALLENGES,70,CHAMPIONSHIP MANAGER,1,CHAMPIONSHIP MANAGER 2001/2002,1,CUSTOM DATABASE,17,EDIT,8,ESSENTIALS,3,EVERYTHING,811,FACEPACK,1,FM BOOKS,2,FM EXPERIMENT,10,FM NEWS,65,FM14,99,FM15,64,FM16,110,FM17,78,FM18,63,FM18 INFO,9,FM18 NEW FEATURES,7,FM18 PLAYERS,4,FM18 STAFF,4,FM19,69,FM19 NEW FEATURES,6,FM20,278,FM20 BARGAINS,7,FM20 CHALLENGES,45,FM20 DATABASE,4,FM20 LIST,49,FM20 NEW FEATURES,9,FM20 PLAYER SHORTLIST,9,FM20 SKINS,10,FM20 STAFF,11,FM20 TACTICS,40,FM20 TEAM GUIDES,34,FM20 TOP WONDERKIDS,18,FM20 VIDEOS,1,FM20 WONDERKID REVIEW,79,FM20 WONDERKIDS,96,FM2020,275,FM2021,132,FM21,132,FM21 ASSISTANT MANAGER,1,FM21 BARGAINS,4,FM21 BEST LAPTOPS,1,FM21 CHALLENGES,20,FM21 COACHES,3,FM21 FREE AGENTS,3,FM21 NEW FEATURES,11,FM21 SCOUTING,58,FM21 SHORTLIST,4,FM21 SKINS,2,FM21 STAFF,5,FM21 TACTICS,13,FM21 TEAM GUIDES,12,FM21 TRANSFER BUDGETS,3,FM21 VIDEOS,22,FM21 WONDERKIDS,43,FOOTBALL MANAGER,19,FOOTBALL MANAGER 2020,277,FOOTBALL MANAGER 2021,132,FOOTBALL TALK,53,FREE AGENTS,31,GAME GUIDES,88,GAMING EQUIPMENT,5,GRAPHICS,12,JACOB MICHAEL,1,LIAM CARR,3,LIST ARTICLES,106,LOGOPACK,1,OFFICIAL FM HINTS & TIPS,7,PLAYER ATTRIBUTES,6,PLAYER GUIDE,107,PREMIER LEAGUE,1,ROSS WEAVER,1,SAKIS,6,SKINS,26,SYSTEM REQUIREMENTS,9,TACTICAL ANALYSIS,29,TACTICS,76,TEAM GUIDES,64,TEAMS TO MANAGE,24,TECHNICAL DIRECTOR,1,THE MAD SCIENTIST,3,TOP LIST,16,TRANSFER BUDGETS,28,UPDATES,6,WONDERKIDS,333,
ltr
item
FM BLOG: The Story of my Addiction from CM to FM16 (Part 1)
The Story of my Addiction from CM to FM16 (Part 1)
It started in the summer of 1995, towards the end of the summer, more autumn time, but in the summer sounds far cooler. I had recently joined a new college in Solihull and my love of football was beginning to ignite.  Birmingham City my biggest local team (we don’t speak about the other nearby team in a small village called Aston?!) had just finished first, in Division 2.  This resulted in promotion to Division 1 (now the English Championship).  The other lads in my classes at College were talking about football computer games all of the time, most of them referring to a game called Champ Man or something… Typically, like any other school in the UK (and around the world), our lunch times were filled with actual games of football.  Being absolutely rubbish at playing football, I didn’t care if I was picked last, I was grateful just to get a game, even if it was in goals…. Again?! It seemed that everybody around me was talking about football, playing football, watching football and murmuring about Champ Man.
https://2.bp.blogspot.com/-WYGy_vg7pKY/VwtB6uCm9lI/AAAAAAAAABk/vsoh8QiQggMDWX4GhR5SIX9FYISVmnozQ/s640/Championship_Manager_-_Season_97-98_Coverart.png
https://2.bp.blogspot.com/-WYGy_vg7pKY/VwtB6uCm9lI/AAAAAAAAABk/vsoh8QiQggMDWX4GhR5SIX9FYISVmnozQ/s72-c/Championship_Manager_-_Season_97-98_Coverart.png
FM BLOG
https://www.footballmanagerblog.org/2016/04/the-story-of-my-addiction-from-cm-to.html
https://www.footballmanagerblog.org/
https://www.footballmanagerblog.org/
https://www.footballmanagerblog.org/2016/04/the-story-of-my-addiction-from-cm-to.html
true
3612031012790362698
UTF-8
Loaded All Posts Not found any posts VIEW ALL Read More Reply Cancel reply Delete By HOME PAGES POSTS View All RECOMMENDED FOR YOU CATEGORY ARCHIVE SEARCH ALL POSTS Not found any post match with your request Back Home Sunday Monday Tuesday Wednesday Thursday Friday Saturday Sun Mon Tue Wed Thu Fri Sat January February March April May June July August September October November December Jan Feb Mar Apr May Jun Jul Aug Sep Oct Nov Dec just now 1 minute ago $$1$$ minutes ago 1 hour ago $$1$$ hours ago Yesterday $$1$$ days ago $$1$$ weeks ago more than 5 weeks ago Followers Follow SHARE TO UNLOCK THE DISCOUNT CODE STEP 1: Share. STEP 2: Click the link you shared to unlock Copy All Code Select All Code All codes were copied to your clipboard Can not copy the codes / texts, please press [CTRL]+[C] (or CMD+C with Mac) to copy