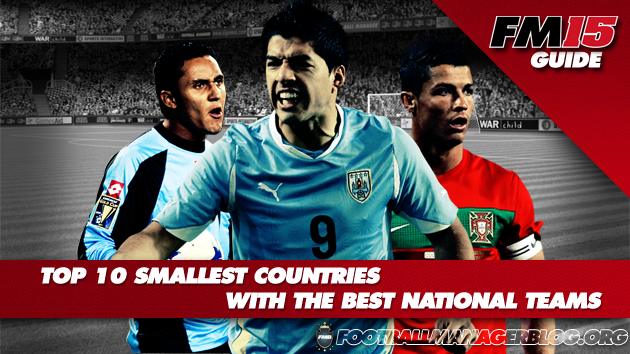 This is our list of 10 smallest countries in the world that have great national teams in Football Manager 2015, care to take on the globe with any of these?

Last year we did something similar with our Top five smallest countries with beast national teams for Football Manager 2014. This time around we have stricken our criteria to make it on the list.

So to make it on our list for Football Manager 2015 edition, countries population can't be larger than 10 million and they have to be in The FIFA top 50 ranking. And also, normally, they need to have a great national team with whom you could play with the big dogs in FM15.

On our tenth place is Sweden. Nation that had a lot of success in the past but none in the near past. They managed to finish as runners up in the World Cup in 1958 that was played in their country as well as two time third placed in 1950 and 1994 respectively.

No doubt that their best player is Zlatan Ibrahimovic, one of the superstars in modern football today, and to keep him company and help you achieve your goals in FM15 there are the likes of former wonderkid Kim Kallstrom, Sebastian Larsson and Ola Toivonen.

Now here's a great squad that simply can't get a break on the national scene. Serbia is in the ninth place, but has the player calibre with which you could easily conquer the world. Their only major successes on the national scene are two time runner up places in 1960 and 1968 (as Yugoslavia).

In our eight spot is Bosnia and Herzegovina, nation that just last year managed to qualify for a major competition, that being the World Cup in Brazil no less. But it comes less of a surprise when you take a look at their current set of players.

Edin Dzeko from Manchester City will be your main striker if you take up the role of Bosnia manager in FM15, and the likes of Miralem Pjanic and Emir Spahic will keep the towering striker company upfront. Playing with Bosnia and Herzegovina could be a great challenge.

In our seventh place is Denmark, nation that is still waiting for a major breakthrough on the national scene since 1992 and when their charismatic goalkeeper Peter Schmeichel led them to the European Football Championship title.

They have a solid bunch lead by the former wonderkid now one of the best playmakers in English Premier League, Tottenham's Christian Eriksen. And players like Daniel Agger, Lasse Schone, Viktor Fischer and even the lord Bendtner himself could make things happen for you in FM15.

Our 6th place is occupied by Austria. They are doing extremely fine in Euro qualifiers standing at the top of their group in front of the likes of Sweden and Russia, and this comes as no surprise regarding their squad strength.

Their most shiniest player has to be David Alaba from Bayern Munchen, who is companied by the likes of Martin Harnik, Zlatko Junuzovic, Andreas Ivanschitz and Marko Arnautovic. Great combination of young players with experienced ones. Austria's time is coming!

Now here's a squad you could do wonders with on the international scene. Croatia has only once been third placed on a major competition, but this generation has the quality and experience to do even more then the one from 1998.

They have more than one superstar in their selection, superstars like Luka Modric (Real Madrid), Mario Mandzukic (Atletico), Ivan Rakitic (Barcelona) who all cane make a difference at any given time. And let us not forget the young wonderkids that are waiting in line for the first team chance; Mateo Kovacic (Inter), Alen Halilovic (Barcelona), Tin Jedvaj (Leverkusen), just to name the few. Great squad, enormous possibilities.

We are guessing that there are not many of you out there that would even consider putting Costa Rica on this list, yet alone handing them the fourth spot on it. But they deserve it more then many others to be here!

They showed the world they are a force to be reckoned in Brazil, where they managed to grab the quarterfinals, only to lose against the Netherlands on penalties. But what is more impressive is that they managed to finish first in their group with three former World Champions, Uruguay, Italy and England! Their biggest star is Keylor Navas (Real Madrid), who was also one of the biggest stars of the tournament in Brazil. Also you'll have Bryan Ruiz, Giancarlo Gonzales, Winston Parks and Joel Campbell at your disposal.

Here's another nation with whom you could do wonders in Football Manager 2015. They have an exceptional generation that is simply urging to reach the highest heights of the international scene. They never won or were placed high on any major tournament, but this generation has been the winner of U17 World Cup and runner up of European U21 Championship.

Currently their biggest star is Xherdan Shaqiri (Bayern Munchen) who is on loan at Inter, but the likes of Ricardo Rodriguez, Diego Benaglio, ROman Burki and Stephan Lichsteiner are all world class players that will help you achieve your goals in FM15.

Nation with great players, proud history, but no luck on the big scene. Portugal is a force that has to be reckoned with in the footballing world. And also they are an incubator that produces some of the greatest players in football history, Figo, Eusebio and their current superstar Cristiano Ronaldo.

There isn't much more to say about Portugal national squad that you might not know. And exceptional group of individuals lead by the brilliance of Cristiano Ronaldo that just miss something when playing on a major tournaments. Tactics, team spirit maybe?

When a country so small in population produces so many world class players they most definitely deserve to be in the first spot! Not only that, but Uruguay is two time World Champion and no less than 15 times winner of the Copa America! Almost unbelievable achievements for such a small country.

You will have the likes of Luis Suarez (Barcelona), Fernando Muslera (Galatasaray), Diego Godin (Atletico), Edinson Cavani (PSG), Martin Caceres (Juventus) and Cristian Rodriguez (Atletico) on your disposal to continue their great success streak on the international scene.