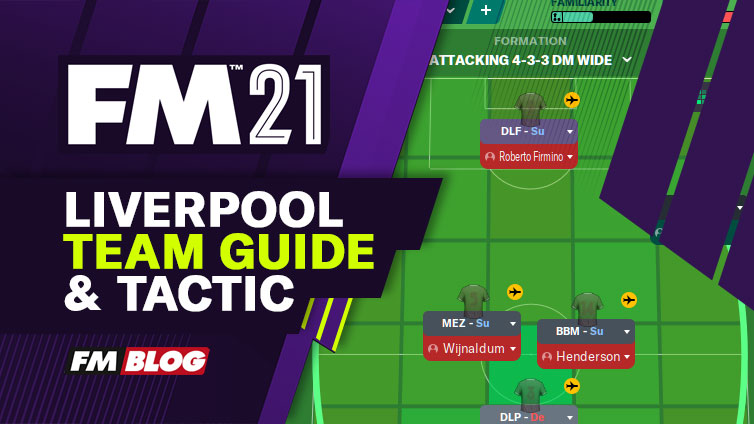 
Here is a brief analysis of the Liverpool squad, their club structure, relationship any potential managers will have with the board, expectations and possible tactics any FM manager can use.


Liverpool are a club rich in history, with 19 league titles and 6 European Cups, Liverpool are only 2nd in being the most successful club in England. Recently, they are a very strong side with superb performances in both the league and in Europe. The expectations of replacing Klopp who is a fan favourite will obviously be very high. Are you up for the challenge?


Liverpool are the defending champions of the Premier League, the board expectations should you take over will be, 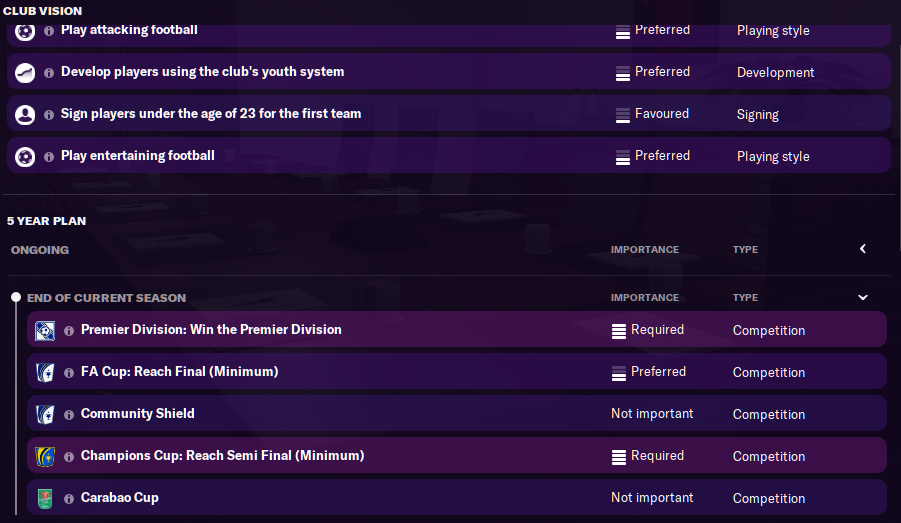 2. A semi-final < finish at the UEFA Champions league

3. Reach the final of the FA cup

The board will require you to play attacking and entertaining football as a bonus requirement. Managers will also be required to sign players who are under 23 for the first team and develop young players using the club’s youth system.

The club is also blessed with excellent training facilities and a superb youth setup that churns out league ready players every season. Liverpool is also one of the loudest stadiums in England and it should not be too difficult to make Anfield a fortress and a nightmare for away teams to visit.


Liverpool have a pretty set and well-oiled first team and some able backups for most positions. Heading into the transfer market should only be a luxury for most managers.

With Liverpool, you can probably continue using Klopp’s Gengenpress tactic. They have players with high work rate and the gegenpress will ensure that the ball is won high up the pitch itself. This is also a double-edged sword with fatigue becoming a factor during a congested fixture list and also the chance for injuries to increase. You could alternatively deploy a simply vertical tiki-taka which is also a fast paced tactic aimed at creating a lot of chances.

A 4-3-3 DM or a 4-3-3 is from my experience the most reliable tactic for this Liverpool squad. You can alter how attacking or defensive your team lines up based on fixtures but the trusted 433 always works for Liverpool.

A rough example of what your line-up would look like in a 4-3-3 formation is as follows; 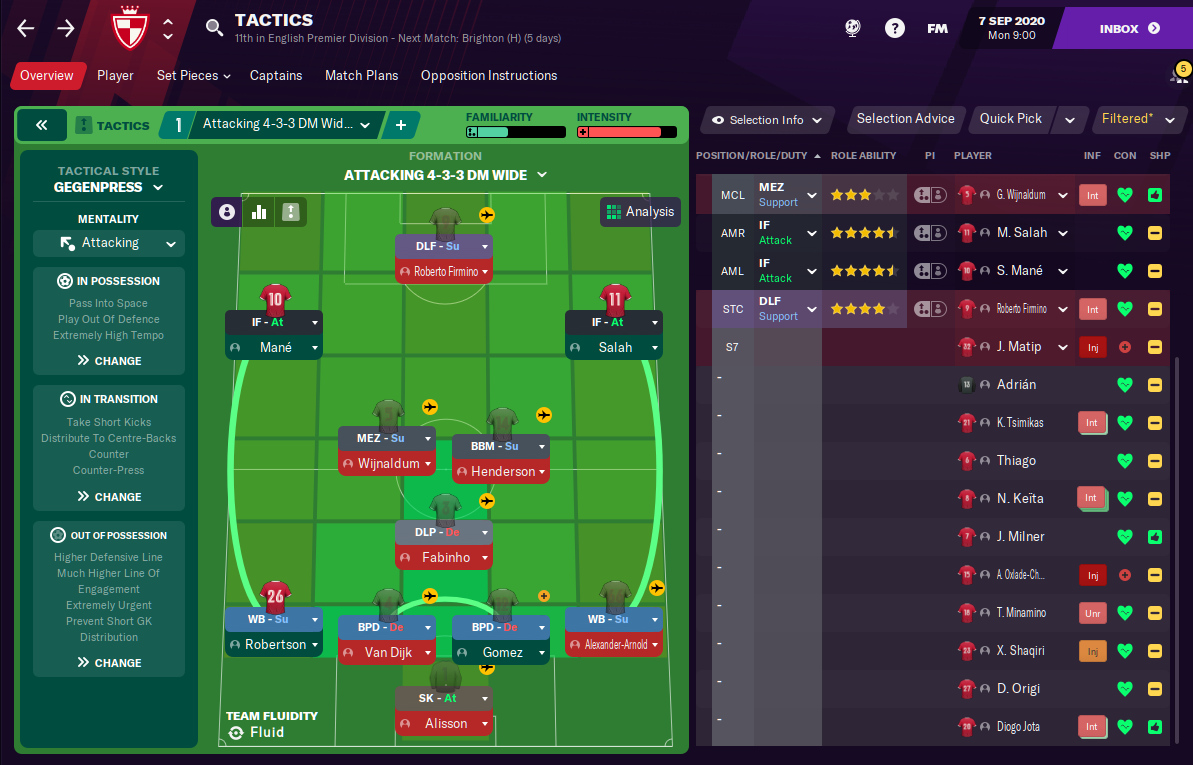 Alison Becker as a sweeper-keeper

Fabinho to play as a defensive midfielder in a deep-lying midfielder (Defend) role or a regista role.

Wijnaldum as a mezzala & Henderson in a box to box midfielder role.

Sadio Mane & Mohammad Salah on the left and right wings respectively operating as inside forwards.

Roberto Firmino as a lone forward in a deep-lying forward role or a defensive forward.


The entire first team is riddled with key players with quite a few members being picked in the league and European team of the year. To pick out a few,

Currently one of the best defenders in world football, Van Dijk is an absolute beast in the game. Not only does he have top defensive attributes, but he is also a major threat from set-pieces and is a big-game player.

Mane is an extremely speedy winger who is lethal in front of goal. He is also extremely versatile and is a perfect fit for the fast Liverpool side.

Mo Salah is one of the best players in the world in his position. Just as Mane, he is extremely fast, tricky and is lethal in front of goal when presented with chances. He has 81 league goals for Liverpool in just 116 appearances which is an even better record than what Ronaldo had at Man Utd.

Alison Becker is the key to maintaining composure at the back. His calmness, ball-playing ability and distribution are important to the Liverpool defence and in them getting quick counter-attacks started.


Liverpool as such do not have many weaknesses and will be a comparatively smoother ride for most managers unless they horrible luck with injuries. However, some of their weaknesses are,

1. The best tactic that suit Liverpool is the Gegenpress, but it is a double-edged sword with injures being a common occurrence. You will also have to rotate the squad more than normal because of fatigue.

2. There is a massive drop in quality after the first team, especially in the attacking wingers' department with no proper backups for Salah or Mane.

3. The board and fan expectations are pretty high and anything other than championships could be seen as a failure.


There are a lot of exciting young prospects in the ranks or on loan who have the potential to be some of the best players in the league. A few examples are,

One of the most talented youngsters from the Liverpool academy, Elliott is also very versatile and can slot in multiple positions playing various roles. Elliott is currently on loan at Blackburn and is already said to have set the league alight with some brilliant performances.

Van Den Berg is an able centre back who develops into a very good one in most saves. He has already slotted in for Liverpool during their injury crisis and has proved that he can do more than a decent job. He is also very good in the air and can be a threat from set-pieces.


Liverpool already boast of some of the best stars in the world, however, these players could be welcome additions to the side.


These players may be surplus to requirements at the club or may not be of the expected quality.


To Summarize, Liverpool are one of the strongest teams in the English Premier League & a favourite for many FM managers. Can you help them defend their EPL title and help them regain the UCL? The quality is definitely high but so are the expectations.