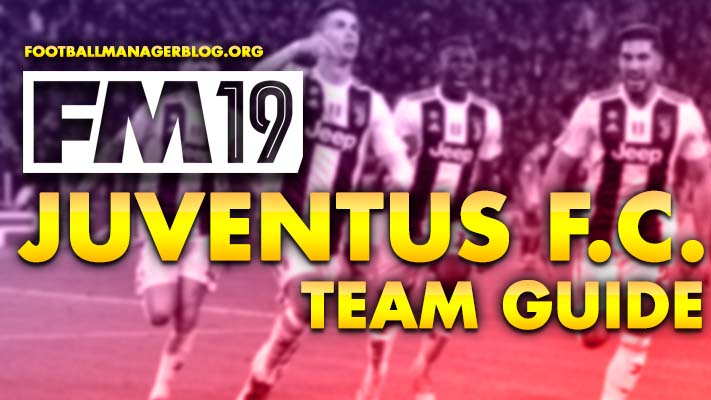 Welcome along with the most detailed Juventus team guide for FM19. Also included is a downloadable tactic that guarantees success, not just with Juventus, but any similarly powered club.

Among other things, I'll share exactly how to win the Champions League with the Old Lady, feet not completed by numerous managers since the last time they had won it back in 1996.

A brief history of Juventus, the birth of an empire

It all began with a bench on Corso Re Umberto, one of the most famous streets in the city centre Turin.

A group of friends gathered on this bench. They all possessed a shared passion for football, a special game that had recently been ‘imported’ from England. They had an intriguing idea, to create a sports club. The boys attended the ‘Massimo D’Azeglio’ high school, which specialised in classical studies. They were well educated, but the eldest was just 17 years of age. This paved the way for the club’s name. In Latin, the name ‘Juventus’ means youth. They weren’t aware of it yet, but on 1 November 1897, they had given birth to a legend.

And so Italy’s greatest football team was born, almost by chance. The club’s first President was Enrico Canfari, the first ground was Piazza d’Armi (Parade Ground), and the side started out wearing pink. Sporting that same jersey, the club made its debut in the national championship in 1900. Three years later, the Bianconeri colours, which had come from Nottingham, were in use. Five years later, the first Italian title arrived when Juve successfully beat off stiff competition from Genoa and Milanese.

After this, Juve went on to win the Scudetto ("small shield") another 36 times, and they also added two Champions League titles along the way, a trophy that is wanted the most by all the Juve faithful. 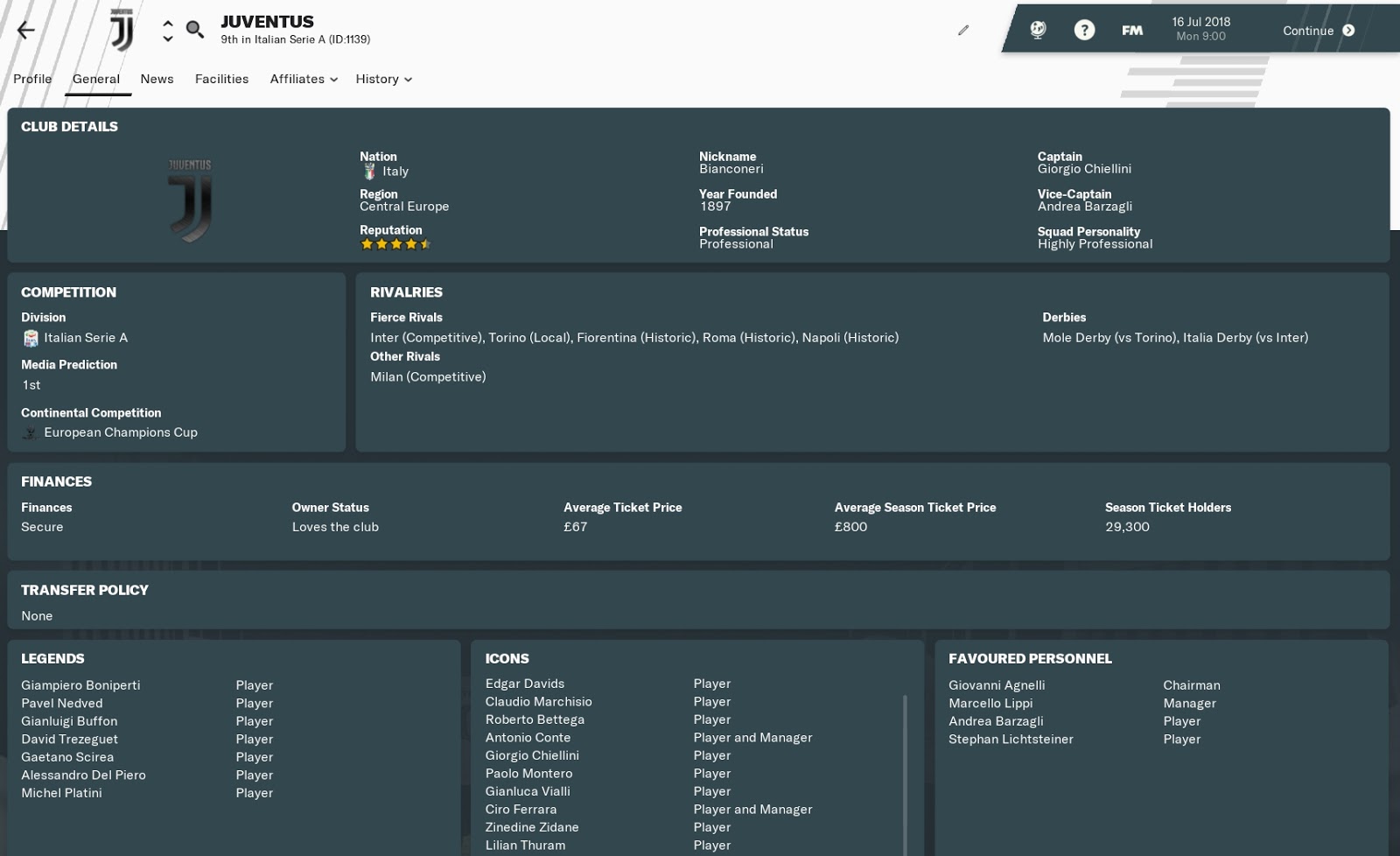 Minimal board expectation is for the team to win the Serie A, reach the final of the Italian Cup, and most importantly to at least the reach the final four of the Champions League.

To help you with this journey, you'll be assigned a transfer budget of £17.95M with £4.17M in monthly wages. If you think you can win both the Italian Cup and the Champions League, you will be granted another £3M for transfers.

Allianz Stadium is the home ground of the Bianconeri, and it has a capacity of 41,500, which can be expanded in a few years by another 5,000. All the facilities at the club are top notch.

Let's break this down by sections and see which are the top players for each, which youth players are worth a watch and which players could be brought in to help with the squad depth.

Your first option for the GK position should be the big Polack, Wojciech Szczesny. He's a first-team player right in his prime years and could serve you at the top level for another five years.

The second option is a home-grown player and one who could serve the club for an even prolonged period, Matia Perin.

But if you want to earn some money, I suggest selling Szczesny after the first season and bringing back Emil Audero, who in four years could become a key member of your squad and is home-grown player at the club. Plus, you'll save good amount of money on wages as well. Also, do scout Predrag Rajkovic, cheap, Serbian national goalkeeper who develops to be one of the better goalkeepers in the game.

Your top two central defenders should be Chiellini and Bonucci. Both in the thier prime years and playing at an elite level. Try rotating them as much as possible to keep them fresh.

Rugani is the one who should be given the most chances in rotations, while Barzagli and Caceres should be your last resorts and you should look to replace both as soon as possible.

Other than these five there isn't much quality in DC position, so you should make it a priority to bring in some fresh faces. I suggest bringing in Filippo Romagna from Cagliari, as he is quite affordable and is also a home-grown player at the club. He develops nicely if given enough first-team chances and if mentored by one of the elder players at the club.

Joao Cancelo and Alex Sandro should be your first options for the full-back positions. Both are capable of playing the role of a complete wing back, and a general rule of thumb is that to keep your tactics balanced, so set one in support and the other in attack duty.

Spinazzola and De Sciglio are their backups, but both are out with injuries at the start of the season which will cause problems so look to bring in some players on loan. Kenny Tete & Andreas Poulsen could be reliable backup options if signed on loan.

At the start of the second season, you must bring in another young home-grown player back from loan at Sassuolo, the Brazilian attacking wing-back Rogério. The young Brazilian can easily step-in the first-team and thus be a replacement for Alex Sandro, who you could sell for a hefty price while reducing your wage budget for a hefty fee.

Miralem Pjanic is the teams's primary playmaker and your best midfield player overall. Best played in the defensive midfield position with a deep-lying playmaker role, so he can start your team attacks from the deep and bring the ball out of the defense.

Since we'll be playing with a three in the midfield, the other two players to make the starting XI are Matuidi (Ball Winning Mid) and Emre Can (Box2Box Mid). Rodrigo Bentancur should be your first option when rotating as he is the biggest talent club currently in the midfield position. Sami Khedira is past his prime, and you should look to offload him as soon as possible.

Sandro Tonali is the youngster you definitely must bring in if presented with the chance, dubbed as the next Andrea Pirlo this youngster is truly incredible. Nicolo Barella and Rolando Mandragora (home-grown at club) are two midfielders that should be given a proper scouting as well.

There's little doubt who the key player and the biggest star of the team is, none other but the legendary Cristiano Ronaldo. Even thou the game suggest playing CR7 as your main striker, I suggest playing him on the left wing as an inside forward so that you can play both him and Paulo Dybala at the same time.

Dybala is a bit of an enigma in FM19 and is hard to get the most out of the Argentinian, but I found that playing him as a complete forward in a support duty works the best for him. Dybala should also be your main free-kick taker along with Pjanic.

[post_ads_2]
Mario Mandzukic should be sold as soon as possible, and you should look to sign a promising U18 player from Palermo, Cosimo Marco Da Graca, to replace him. It is insane how well he develops and becomes first-team regular in a matter of few seasons.

You should also consider playing Moise Kean on the left wing as much as possible, as well as Bernardeschi on the right. Both as inside forwards, and depending on Cancelo's and Alex Sandro's mentality, you should properly adjust mentalities of the attacking midfielders.

Look to offload both Costa and Cuadrado after the first season, and bring back Pjaca and Orsolini back from loans. Also, consider Antonio Marin from Dinamo, as he is a potential worldie and will cost you peanuts.

Gonzalo Higuain is currently on a loan, but should also be sold as soon as he returns back from it. You will earn buckets of money by selling Mandzukic, Costa, Cuadrado and Higuain, this should all then go into strengthening and rejuvenating the squad.

I've tried a lot of different tactics with Juve, but nothing worked so well as my custom made 4-1-2-3 gegenpress attacking tactic. With a win rate of over 85% across all competitions this is the winning tactic for Juventus on FM19. 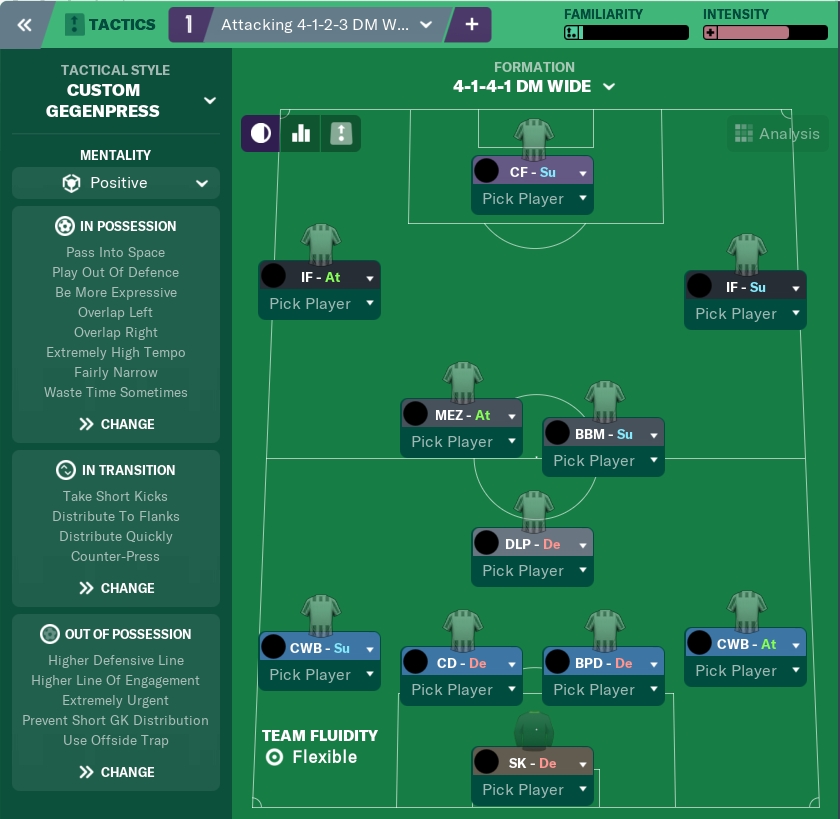 I've attached a copy of the tactic for you to download, or to play around with it and adjust it to your players. As said at the opening of the article, this tactic will suit any similarly powered club to Juventus.

When playing with Juve you will probably find it easy to win the league if you stick with my tactics, but the real challenge is to try and win the Champions League. To achieve this feat and become a club icon, you will have to rotate your starting XI properly.

Try keeping your starting XI as fresh as possible for the European games. Rotating them often is the key, especially against the weaker sides in Serie A and always send you B team to play games in the cup. Don't be afraid to select a completely different XI when the schedule gets tight. You must keep your XI at their fitness peak for Champions League fixtures.

Another great thing is that you can send your players to Juventus B team and improve fitness of the backup players that are not getting enough game time in the first team. Juventus B currently plays in Italie's Serie C, and will most probably win promotion to Serie B after the first season. They can't however win promotion to Serie A, but nevertheless Serie B will provide great experience to the youngsters at your club.

Stick to the tactic provided, bring in as much of the players I've noted above, rotate your XI often, and you could be on your course to winning the Champions League in the first season.

That's it for the FM19 Juventus team guide; I hope it will come handy if you've decided to make history with the Vecchia Signora. Fino alla fine, Forza Juventus!