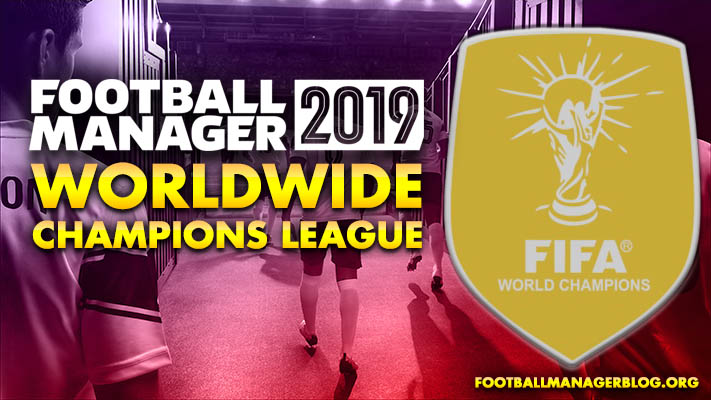 Few words from the editor

I want to start by thanking Graaa, the mad genius behind this custom USA database from FM15.

This edit includes a lot of his work on the Extended Club World Cup that was part of that file alongside the changes I made.

I only posted it because he chose not to continue that mod or update it, but left its details as fair use for others, and I thought the idea was too awesome to let it vanish - as someone who plays a lot in the Americas I really liked the option of being able to take my team onto a bigger stage than the CONCACAF Champions League could provide.

All domestic leagues are left untouched and will run alongside the intercontinental tournaments: fancy midweek trips to Argentina to play Boca between your league matches? I BET YOU DO.

The FIFA Champions League and World League are senior-level tournaments that mostly work how you expect.

Champions League has better competition and better payouts, though the difference between the two isn't as derisory as in real life.

Finish high enough in your domestic league or win your major domestic cup, and you get a ticket (if your league of choice doesn't use a single table or has some other continental qualification shenanigans, it SHOULD work properly depending on how SI or your database modder of choice coded that specific league, but I can't be certain.

There are qualifiers (the Champions League winner, World League winner and champions of 30 specified leagues do not have to go through them, and instead get automatic group stage places), and a group stage, and a knockout stage, and Big Fancy Neutral Site Finals.

There is now also goal-line technology and VAR in CL/WL group stage games and onward.

The FIFA Youth League uses a similar format and replaces the Viareggio Tournament, or whatever it is called, for people that aren't using the FM19 Real Name fixes.

That pits elite U18 teams against each other - I couldn't get the editor to choose precisely the teams that qualified for the CL, the way the UEFA Youth League does, but the idea is the same.

There is also a FIFA Super Cup between the Champions League and World League winners, scheduled after qualifiers finish (since neither of those teams participates in them) but before the September international break and the start of the group stages.

The FM19 version of this mod is available on the Steam Workshop, and also here.

Squad registrations may disappear upon loading a save game - this is apparently due to an SI bug, but on a CL/WL matchday you will still be able to select and register ineligible players even though it says you can't, so this is annoying but not fatal?

If you need more details, they're below. Let me know if there are any bugs or if you have any suggestions, and otherwise have fun!

The number of spots is fixed, unfortunately (even the advanced editor won't let me do otherwise), and laid out as follows in the FM18 version:

Every other FIFA member country (in other words: all other countries in the DB except for defunct, disputed, or the following: Bonaire, Martinique, Reunion, St. Pierre and Miquelon, Zanzibar, Micronesia, Kiribati, French Guiana, Sint Maarten, Mayotte, Northern Mariana Islands, Guadeloupe, Saint Martin, Wallis and Futuna Islands, Tuvalu), starts in the 1st QR, with one or two spots:

Countries that are playable in the base game that start here include:

The Champions League has four qualifying rounds, with two-legged fixtures starting in July.

All CL qualifiers are seeded into these rounds depending on how high they finished and which league they qualified from or won the domestic cup in, as above.

The 96 winners in the 4th qualifying round (August) go to the CL group stage along with the 32 automatic qualifiers, the losers go to the WL group stage.

Each group stage features groups of 4 (so six games each). CL plays on Tuesdays and Wednesdays, WL on Thursdays, from September through December.

CL: 32 groups of 4, the top 2 in each group qualify for the knockout rounds starting in February.

Everything goes as you'd expect from there.

Prize Money (all amounts in Euros)


CL Group Stage (WL pays about half this amount)

All teh credits got to Sports Interactive forum member Dallan. You can find the original thread here.