10 Wonderkids You MUST BUY in Football Manager 2017 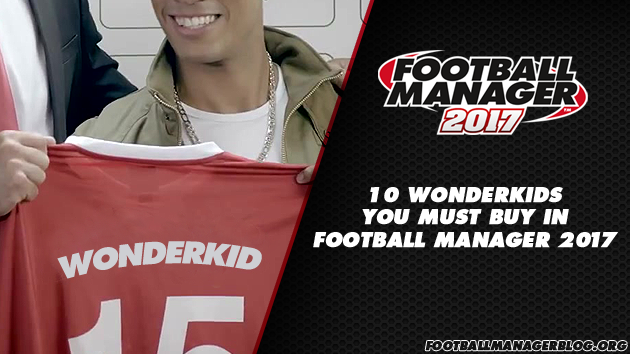 Time to reveal ten best wonderkids in Football Manager 2017 that any player should look to sign if possible. These are creme de la creme, as French would say, the very best ten youngsters in each position.


Let me first clarify who falls under the category of a wonderkid player in FM 2017. Firstly, a player mustn't be older than 20 by the July 1st, 2016, in FM17. Secondly, his current and potential ability have to rank high. By this, I mean that their starting ability in the game has to be over 150 or if they have a negative PA it has to be anywhere between -8 to -10.

How can a player with negative potential ability be a wunderkind material? Simple, game developers have added this negative PA to guard themselves against giving a solid PA number to young players who still haven't proved themselves in the real world. One more thing, the negative potential ability is a ranged ability, meaning each negative ability has a different range, i.e. -10 has a range of 170-200, -9 = 150 - 180, etc.

Since there is still no official pre-game editor to check on these potential abilities, I've rolled out the game to the year 2026 to determine which youngsters develop best in FM17. Also, I've compared their average rating throughout the years and the club stature they played for my second criteria to determine who is the best of the best.

So here are, in mine opinion, ten best wonder kids at every position you must try and get for your team.

No brainier here, Donnarumma was an obvious choice to be granted the status of the best young goalkeeper in Football Manager 2017. Media are already comparing the youngster to the legendary Gigi Buffon, and he is well on his way to becoming a legend himself.

The problem in acquiring Donnarumma's services is his high starting price of 7 million Pounds, and AC Milan will also not part with their prize possession for anything less than a 3 or 4 times that figure. Still, if you have the transferability at your club to snatch Donnarumma, then, by all means, do so as this is a goalkeeper that could easily play for another 20+ years at the highest level.

There are higher profile youngsters at the start of the game, like; Niklas Sule, Jose Vallejo or Jonathan Tah, just to name a few, and even thou Diogo Queirós is a relatively unfamiliar name in football he won't be for too long if we take into account his development in FM17.

What is great about Diogo Queirós is that his starting value is £1.5K! And looking at his starting attributes, you can immediately see that we're looking at the world-class player in the making. Get this lad in your first season and watch him become a world class central defender in no more than five seasons, even tho he's only 17 years old.

Álex Grimaldo if by far the best young left wing-back defender at the start of the game. The product of Barca's La Masia, Álex Grimaldo, is looking to become next Jordi Alba. I dare to say that he becomes better than his national compatriot and reaches the ability of Bayern's Alaba or Juve's Alex Sandro, currently two best wing-backs in the world, in mine opinion.

Unfortunately, Álex Grimaldo just made a transfer from Barcelona to Benfica and holds five years long deal with the Portuguese top tier club, with an optional one-year extension. Even more sad news, his minimal transfer fee is set to a staggering £52M. Nevertheless, if you ever get a chance to obtain Grimaldo's service for your club - do so. His average rating in 10 seasons is astonishing 7.63!

Another youngster coming from Portugal and the second one coming from Porto, Diogo Dalot, may not have the best attributes at the start of the game, but he sure develops into a world class right wing back. Ten years in the game and he managed to cap 56 times for his national team and has an impressive 7.52 average rating.

The great thing about him is his starting value, which similar to Diogo Queirós is only £2.7K. He has no other clauses in his contract, so it could be relatively easy to obtain his services at the start of the game for a low price.

Again a player from FC Porto, but this time a more known one from previous editions of Football Manager, Rúben Neves. He was already thought to be the best young defensive midfielder, and he has kept his status as such in this edition of FM.

Unlike Diogo Dalot and Diogo Queirós, Rúben Neves is already an established first team player, which in return means that he'll be a tough one to buy, unlike the previous two. His starting transfer fee is £6M and has a minimum fee release to his name of £34,5M. Tough one to buy, but will be worth your while in the long run.

This might come as a surprise including as there are much more recognised youngsters at this position than Filippo Melegoni, like; Renato Sanches, Dele Alli, Youri Tielemans or Marco Asensio, but ultimately ten years into the game and Filippo Melegoni topped them all. He has a better average rating and arguably better attributes than the rest.

Also besides that Filippo Melegoni develops into a world class midfielder, his starting value is not that high, and Atalanta should not be a tough own to break down into giving Filippo Melegoni an open door if a transfer bid of £300K comes their way.

Young Croat is somewhat known in the nation but still awaits proper introduction at bigger stages. Ante Coric has fairly solid attributes at the start of the game, and given the right amount of first team football and training this youngster becomes a world-class AMC in no time.

His starting transfer value is £5.25M. This might seem high looking at his current attributes and his age, but more you wait the price just grows larger. So try and snatch him right at the start of the game, you might even end up paying less than his value, simply by making the player unsettled at his current club through media. Another one to have a closer look at this position is Coric's youth national teammate, Nikola Vlasic from Hajduk.

Last year we had Bernardo Silva, this time we have Kylian Mbappé from AS Monaco. Young French winger develops insanely in the game and becomes arguably one of the best players at his peak. He becomes way better than his former teammate, Anthony Martial.

Great average rating accompanied with lots of assists and goals in ten years has pushed Kylian Mbappé in front of all other young left wingers. His starting transfer value is not high, around £1M, but what's great is the fact that AS Monaco has set him on a loan list, so try and grab a loan deal with a possible future buyout clause.

Coman is already a world-renowned player and was an obvious choice to grant him the best attributes of the bunch. Kingsley Coman numbers speak for themselves, an average rating of 7.83 throughout ten seasons is the best I've seen so far. High goal and assist numbers each season as well.

Currently, on a loan deal at Bayern from Juventus, makes him unavailable for transfer at the start of the season. You will have to wait for the first season to pass and then present Juventus a bid of around £40M to start your transfer negotiations. High amount to pay, but he is the best wonderkid in the game.

For the ones who remember Maxim Tsigalko and Cherno Samba from the CM days, I present you, Zé Gomes. This youngster from Benfica B team develops into a +30 goal machine per season. The advanced forward role suits him best but can easily play as a poacher.

Whatever the means, buy this youngster immediately you start your save on FM17, and thank me later for discovering this gem to you. He can play for more than 13 years at the top level.