3 Things You Can Do Better In Football Manager

Let’s face it; no one is the perfect Football Manager player. I’m the first to admit that I can improve in so many areas of the game. But this article will show you three key areas that you could be doing better.

You may believe that you already do these things well, or you might be a complete noob at the game and need lots of help improving.

In this article, I hope to cater to both audiences and shed some light on some things that you may have thought were irrelevant, but in reality, could take your game to the next level.


Training can be as vital as tactics themselves. Inadequate training routine can lead to your team not being familiar with your tactics and therefore not translate your genius onto the pitch.

It can also lead to injuries and fatigue shortly after.

You want to get the amount of training right because if you undertrain your players, they won’t know the tactic and may be unfit.

But if you overtrain them, they will be tired on match day.

READ How to Use Training More Effectively on Football Manager 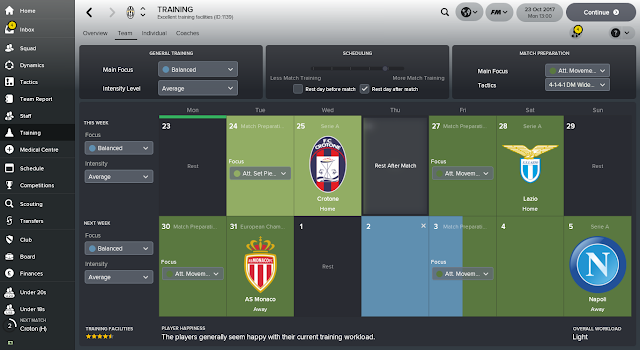 The best way that I found is to train on an average intensity and balanced when the season starts, but in preseason I train on high intensity.

Training on high intensity during the season will lead to injuries and fatigue.

When the season starts, you can start to be more specific in training, depending on what team you’re playing.

If you’re playing an easier or inferior team, prioritise attacking movement in training.

However, if you’re coming up against a stronger team, train defensive positioning.

Regarding intensity I generally prefer medium or average intensity.

A preference of mine is to tick the ‘allow rest after match’ box, as rest can be vital if you have a busy fixtures list.

I don’t allow rest before a match as I like to train up to game day.

This means you can train them in this position and grow their familiarity with the role.

The more comfortable a player is in a particular position, the better they will play.

Another thing you can do in training to aid your players on the pitch is an additional focus.

If a certain player in your team lacks in a specific attribute, train it.

You will be able to see what a player lacks in their position by checking required attributes for the role that they’re playing.

Each player in your squad lacks in a certain area, so this aspect of training can take your team to the next level.

2) Using Prozone/Analysis/STATS to spot any issues


Using the Prozone or STATS can help take your team to a new level.

Prozone is so in-depth, you can have a brief glance at it at halftime and notice something drastic that needs to be changed.

Match Analysis allows you to see why you’re getting overrun in midfield or why their striker is getting so much time in the box.

There is so much analysis that can be done, just to improve very minor things.

I don’t overuse stats, but I try and use them effectively.

By this, I mean that I’ll check it every half an hour, but if I don’t notice anything odd I don’t change anything.

However, if something is odd or out of place, match analysis allows you to put your finger on it and stop it straight away.

When I check the stats and something isn’t right, I go straight to my tactics and attempt to fix the problem. 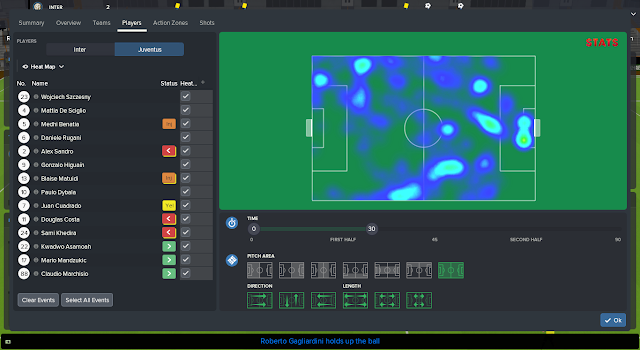 I primarily use the heat map and key passes tracker. This way, I can see where each set of players are.

I can also see the creative force from both teams. This can be vital as this could lead you to close down certain players.

Be using STATS you can learn what the opposition is doing, and generally it is easy to see how to stop it.

For example, if a team is very narrow and dominating possession, drop your MC back.

Another thing you could do is select all the options for exploiting and clearing the ball to the flanks.

In doing this, also set your wings to attack.

By doing these things, you can handle their central dominance and then kill them on the wings.

All this can be learnt by just using the heat map.

Another trick is to turn on advice from your assistant manager, as they can provide some very important information that you may have missed otherwise.

These things include pass completion and dribble completion for certain players.

These small snippets can save you from having to check the analysis section every time you want to see what’s happening.


Tutoring is a great way to improve the development of a youngster and mold them to be similar to the tutor.

The main positive of tutoring is that the younger player will improve and change to closely mirror that of the senior player that is tutoring him.

The two players should play in the same or similar position and have a similar personality.

There are two ways of tutoring in FM; on the field and off the field tutoring. 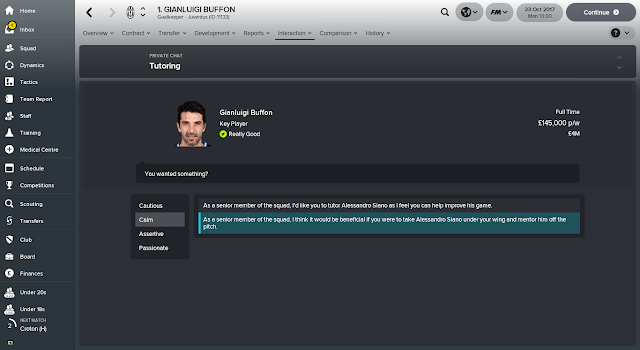 These two ways differ a fair bit and affect what attributes the tutee picks up on.

The younger player’s ambition, controversy, loyalty, pressure, professionalism, sportsmanship, temperament, and determination will change to be similar to his tutor’s stats.

This means that the tutor has to be somewhat of a saint.

This isn’t always the case, however. If the personalities of the younger and older player clash, the tutoring may stop as they might have a falling out of sorts.

This is useful when you have a young player in a certain position but has poor player preferred moves.

You could tutor them and give them some great ones.

This is why the tutor and tutee have to play in a similar or the same position.

You don’t want a young centre-back being tutored by a winger.

There are many things that you would want in a good tutor.

However, many of these things vary, depending on what and who you want to tutor.

These features of the game can be somewhat underused by the general FM public, but by using them, you can improve your game drastically.

They are small and simple idea’s that can help your current save.