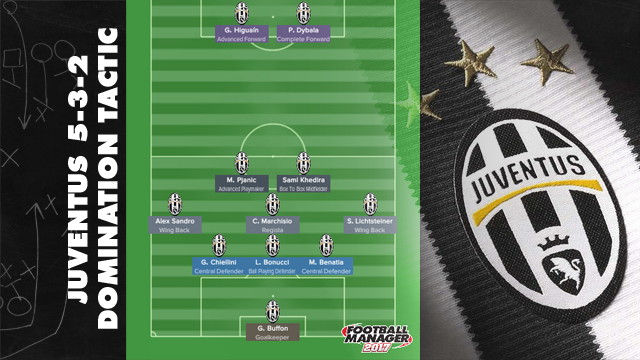 It's time for me to share with You mine ultimate masterpiece, the crown jewel I have been working on for the past 6 months, Juvenuts 5-3-2 tactic for you to totally dominate Football Manager 2017. 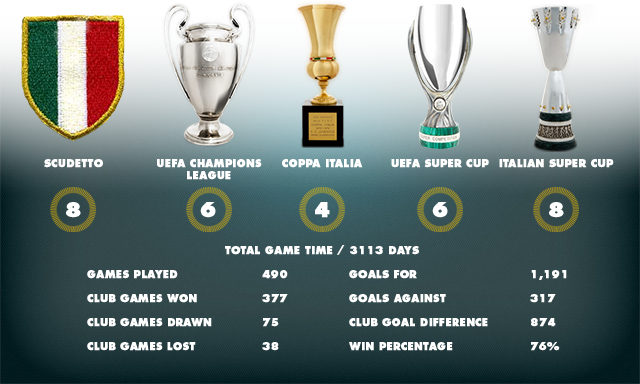 It was Antonio Conte who brought back the old 5-3-2 tactic once he got appointed at the helm of Juventus in 2011, and then later on Massimiliano Allegri continued in his path once he took over 3 seasons back, but it's not the formation that brought 6 consecutive Serie A titles but rather the team instructions and philosophy behind it which came from the tactical godfather Marcello Lippi.

Lippi's philosophy was that you don't need to have world-class players in your team to become the best, but rather that you make your team function as a unit, they must live and breath as one! That's why we can today see wing-backs Alex Sandro and Dani Alves attacking down the flanks, scoring goals and assisting like modern wingers or inside forwards, and also we can see forwards Mario Mandzukic and Juan Cuadrado defending their flanks. It's very similar to Johan Cruyff's total football philosophy but it still needs more tactical awareness from your players.

This tactic will bring you exciting attacking football with a number of clear cut and half chances per game, and in most cases you will dominate possession against your opposition. Also, you will see your team defend and attack as one unit.

This tactic is suitable for any team in Football Manager. I have tried it with lower league clubs and mid table clubs and the results were exceptional.

Screenshots of the tactic 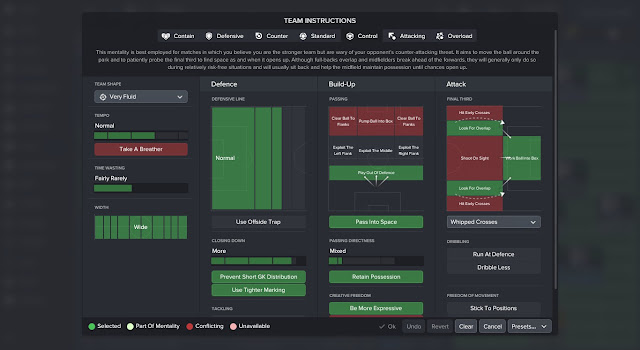 Mentality / Control - Control the match, but be wary of counter attacks. This mentality is best employed for matches in which you believe you are the stronger team but are wary of your opponent's counter-attacking threat. It aims to move the ball around the park and to patiently probe the ﬁnal third to ﬁnd space as and when it opens up. Although full-backs overlap and midfielders break ahead of the forwards, they will generally only do so during relatively risk free situations and will usually sit back and help the midfield maintain possession until chances open up.

Team Shape / Very Fluid - With this approach, all players are expected to contribute to all phases of play within a very fluid system.

The team will be encouraged to play free-flowing football with players allowed high levels of creative freedom.

Tempo / Normal - Your players will adapt a balanced tempo throughout the match, increasing it when necessary and slowing things down in appropriate situations.

Width / Wide - Wide instructs the team to stretch the play even wider and use the full extremes of the pitch to their advantage.

Defensive Line / Normal - Players will adopt a balanced approach to their defensive line according to the match situation. They will push higher when needed and will be willing to drop deeper should it be required.

Closing Down / More - More instructs players to actively engage the opponent in possession in a bid to reduce the time they have on the ball and ultimately to win it back from them as quickly as possible.

Prevent Short GK Distribution instructs forwards to press the opposition defence to try to prevent the goalkeeper building from the back. This should force the goalkeeper to play long or take big risks to distribute short.

Use Tighter Marking will ask players to adopt a marking scheme in defensive situations where players are encouraged to stick particularly close to their assigned opponent in order to prevent them attacking the ball.

Play Out Of Defence encourages defenders to pass their way out of the back rather than clear the ball long.

Pass Into Space instructs players to look to make passes into open spaces.

Passing Directness / Mixed - Players will pick and choose when to utilise a more direct approach depending on the overall team instructions in an attempt to balance their game within the structure of the team.

Retain Possession instructs players to priorities hold of the ball.

Be More Expressive will allow more creative players the freedom to play the game with additional vision and flair outside of the confines of a team's tactical setup.

Final Third / Look For Overlap - instructs players to hold onto the ball and look for an overlapping player in support, most likely a marauding full-back.

Work Ball Into Box instructs players to work hard for their opening, remaining patient and not forcing the issue but rather retaining the ball until the breakthrough occurs.

Whipped Crosses will instruct players to deliver balls into the box with pace, swerve and dip in order to make it as hard as possible for defenders to deal with them. 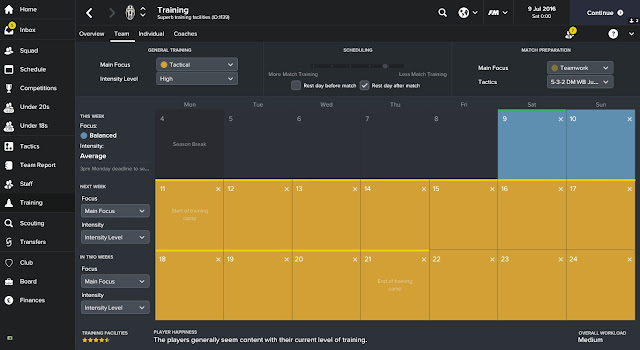 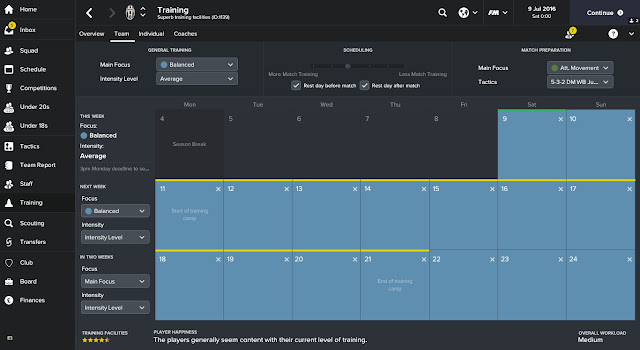 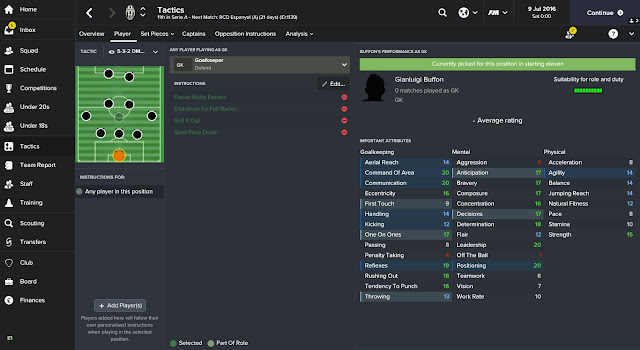 The Goalkeeper role focuses on simple and risk-free use of the ball, with the keeper simply looking to play the ball away from goal to an open player. If a player is not open, the keeper will play it long and safe.

The Goalkeeper will distribute the ball differently between match strategies. For more cautious tactics, he will aim to clear the ball deep whereas for more aggressive ones he will feed the defence in order to start off passing moves.


DCL With a Defend (Stopper) duty, the Central Defenderwill push ahead of the defensive line and close down players before they get to the area.

DC Unlike standard central defenders, the Ball-Playing Defender is encouraged to launch defence splitting through balls from deep to generate counter—attacking opportunities.

With a Defend duty, the Ball-Playing Defender will stay in line with his defensive partner and look to break up attacks, mark opposing forwards and prevent the ball from getting into the box.

DCR With a Defend (Covering) duty, the Defensive Centre Back will drop a little deeper and sweep up through balls behind the defensive line.


The Complete Wing Back loves to attack, and whilst he is capable of occupying his defensive duties. his natural inclination is to affect the game in the opposition's defensive third.

With an Attack duty, the Complete Wing Back will be a little more adventurous in his attacking exploits as he seeks to primarily impact the game in the opposition's half of the pitch.


DM The Regista is a more aggressive version of the deep—lying playmaker suitable for possession-oriented systems that press high up the pitch. Given complete freedom to dictate play from deep positions, the Regista offers a dynamic and unpredictable creative outlet from behind the attack who seeks to maintain intense pressure by constantly looking for new chances as his more advanced teammates get into goal-scoring positions.

MCR The non-stop dynamism of the Box—To-Box Midfielder enables him to contribute greatly to both defending and attacking.

In attack, he pushes up to support the forwards, often surging late into the box to get on the end of crosses and pullbacks as well as providing a threat from distance.

In defence, he harries attacking midfielders and helps protect the defensive line.

MCL The Advanced Playmaker aims to drop into the holes between the opposition's midfield and defence. making himself available for his teammates’ passes and aiming to turn defence into attack in an instant.

With a Support duty, the Advanced Playmaker will stay in the hole and look to spray passes to support players and forwards.


The Advanced Forward's main role is to lead the line and look to spearhead attacking moves. His primary duty is to be the focal point of attacking moves and he is required to both score and create goals. His secondary role is to chase down misplaced through balls or clearances from deep, win possession and lay off passes or crosses to his teammates.

A Complete Forward possesses all the technical attributes of a Deep-Lying Forward, the goal scoring ability of a Poacher and the strength and power of a Target Man.

He is equally adept at playing in others, fashioning chances for himself and getting on the end of team moves. Such a player transcends tactical instruction and should simply be allowed to do his own thing.

With a Support Duty, the Complete Forward will look to drop into space, run at the defence, take long shots, drive to the flanks or play balls through the defensive line.
[next]

If tactics folder is not there, create one with this name only. Other names will not recognise the files inside the game.

If tactics folder is not there, create one with this name only. Other names will not recognise the files inside the game.

Once in your Football Manager 2017 save game: